Flying humanoids, Mothman, Jersey devil, Thunderbird, and flying dinosaurs are just a few flying monsters that people have reported to see in the skies.

A man named Adam was up at Devil's Gate Dam near LA, often referred to as the "Portal to Hell"

"Two years ago, June 14, 2013, I was with my psychic at the time and her friend. I was walking up the trail pass the Devil's Gate Dam sign, and all of a sudden, I see this thing flying into some trees. I know for sure it wasn't a bird, because I had seen the image before. It had a long neck like a Brachiosaurus (Of course, much shorter in length) wings, and a tail. I know I've seen this image before. It was on the Google search when I was researching The Jersey Devil. Keep in mind that adrenaline makes hallucinate. At that moment and time though, I was not experiencing any kind of adrenaline rush. At the time, I didn't say anything for moments. Then finally brought it up."

Interestingly, a man contacted him that had seen the same thing at Gravity Hill.

A husband and wife witnessed the Jersey Devil in the Pine Barrens area in the early 1900s. Mr. Nelson, the husband, described what they witnessed.

It was about three feet and half high, with a head like a collie dog and a face like a horse. It had a long neck, wings about two feet long, and its back legs were like those of a crane, and it had horse's hooves.

It walked on its back legs and held up two short front legs with "paws" on them. It didn't use the front legs at all while we were watching.

My wife and I were scared, I tell you, but I managed to open the window and say, 'shoo', and it turned around barked at me, and flew away.

In November 1966, two couples riding in a car had a reported Mothman encounter in Point Pleasant, West Virginia. They claimed that they saw a "man-sized, bird-like creature" in the TNT area around midnight. According to these witnesses, the creature had red eyes about two inches in diameter and six inches apart. The Mothman was observed standing at least three times. When the witnesses left the scene in their vehicle, the Mothman allegedly followed them, flying over their car for a long period of time. The Mothman achieved speeds of up to 100 MPH, although the Mothman gave up pursuit when they reached the city limits. (see THIS LINK)

In 2001, a teenager witnessed something very unusual over Rt 119 in South Greensburg, Pennsylvania. He heard what sounded like wing flapping of a thunderous type. He looked up to see a bird with a 10-15 foot wingspan and a head about 3 feet long, flying overhead. Others came forward describing a grayish black bird and wingspan of 15 feet and body length of 5 feet.

In the Ozarks, an elderly couple witnessed what sounds a lot like a pterodactyl. It was described as smooth-skinned and featherless, a tiny tail with a bump on the end, and gliding, not flapping its wings.

One flying humanoid was reported over LA and witnessed by dozens of people. In the case of flying humanoids, how they propel themselves is unclear, they remain upright and moving around without any visible means of getting around. In this witnessed case, it looked like a "stormtrooper" from Star Wars.

The skies are the last place we expect to see flying cryptids. When we study the sky, we expect clouds, sunsets, rainbows, planes, birds and the occasional shooting star, but there is nothing more startling than catching a glimpse of something, well, impossible. 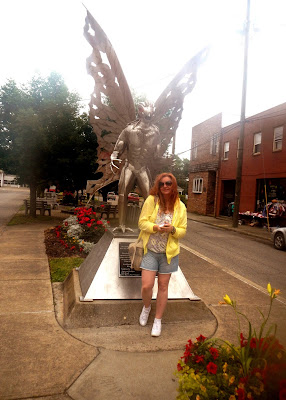 There was a moment when my co-researcher/co-author and friend, Julie Ferguson, and I were hiking into the TNT bunkers in Point Pleasant that something very odd happened. 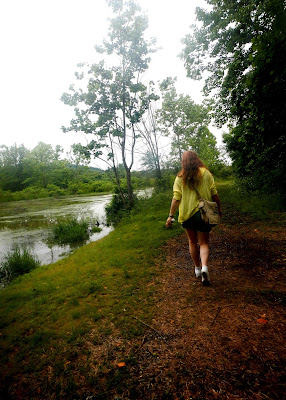 We both stopped and studied the woods and silence around us. There was not a bird, cricket or other sound. The roadway was rural with no takers. It was just us. And I had never in my life felt so alone and vulnerable. Then, something moved overhead, casting a huge dark shadow like an airplane flying low. I lifted my head to see why the plane made no sound and there was....nothing. Nothing but a lingering sense of danger.