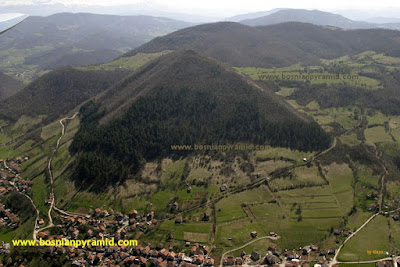 Bosnia has a rich history made even more so by the pyramids, especially the Pyramid of the Sun and its mysteries. Carbon dating places these around 24,800 years (plus or minus 200 years). Amazingly, it was 2005 when these pyramids were discovered. I guess locals considered them hills.

Some of the biggest interest in the pyramids involves archaeoacoustics - the study of acoustic dynamics of archaeological sites. In the case of the Bosnian pyramids, this is a significant study of mind-blowing ramifications.

The Pyramid of the Sun is one third taller than Egypt's Great Pyramid. This one is built with five thick layers of concrete and sandstone slabs one meter thick per layer. The concrete appeared to be made from post glacial sediment and heated to 500 degrees. In fact, it is five times stronger than concrete made today!

It is amazing enough that these ancients build these massive pyramids, but they also used ceramics, concrete, artificial stones, labyrinthine tunnels and, well, a sort of living heart to the Pyramid of the Sun.

Source:  About 160 meters inside the Underground Labyrinth ‘Ravne,’ in the Bosnian Valley of the Pyramids, lies an 800kg heavy ceramic block named Megalith K-2. Megalith K-2 was found 4 years ago and has since been one of the main tourist attractions in Visoko, Bosnia and Herzegovina.

Although there have been several megalit blocks found in the underground tunnels in Visoko, Megalith K-2 has been the largest one found by a long shot.

Samples of Megalith K-2 were sent to the Institute for Atomic Physics - Rudjer Boskovic in Zagreb; the results demonstrated that the Megalit K-2 is a large ceramic block. The conclusion to draw from these findings is that the 8 ton ceramic block is not natural, but man made. This makes the Megalith K-2 the largest known ceramic sculpture in the world.

The surface of Megalith K-2 is a relief which resembles a valley with two intersecting rivers and hills.

Measurements show that 22 meters under the exact location where Megalith K-2 is found, there is a junction of two water flows.

It appears that this large ceramic block was opened and closed at some point in time.

Measurements taken show that an object made out of silicon has been detected on the inside. It has not yet been decided if the scientists will attempt to open the ceramic block and take a closer look.

Scientific measurements show that Megalith K-2 releases an electromagnetic energy field with the frequency of 28 kHz and an ultrasound in the range of 28-33 kHz.

People studying bio-energy and other alternative sciences are reporting restorative waves emanating from the Megalith K-2 which are beneficial to the human body. When in close proximity to the megalith, it is reported that one feels a calming sensation, warmth and pulsation.

(have a look - below - amazing - piezo electricity and very thoughtful design)


Source:  Slobodan Mizrak, a physicist from Zagreb, Croatia, recently visited Visoko for the fifth time. During his stay, he recorded electromagnetic phenomena on the top of the Bosnian Pyramid of the Sun. Several TV cameras followed Mizrak while he conducted his research.

Mr. Mizdrak has detected and measured an electromagnetic beam which goes through the tip of the Bosnian Pyramid of the Sun. He discovered that the beam has the radius of 4.5 meters and a frequency of 28 kHz at intervals of 4.2 Khz.

It is speculated that this is some type of non-hertzian phenomena which contradicts with today’s known physical laws.

It was a great ordeal to get experts to agree that these were pyramids and not just hills with interesting rocks. That hurdle jumped, there are those who debate some of the purposeful energy producing and sonic-producing acoustics. This will be an ongoing controversy, but it always is when we talk about out-of-place/out-of-time finds. I find this to be another example of why scientists must remain humble. We don't have absolutes.

If we put boundaries on what was possible in the past, we might as well do it for our future....