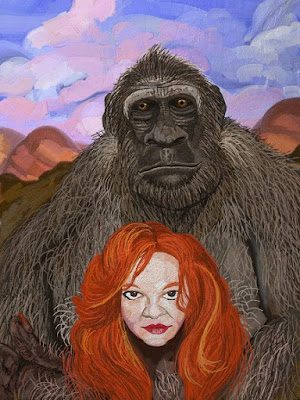 I run around with red hair, likely from around a 4% Neanderthal DNA content that Europeans carry.

But, what if I ran into someone one day with 40% Neanderthal or 60% Neanderthal? I would be very shocked how different we are! They might seem not Homo sapiens, even if they had 40% of that DNA. We are all hybrids, but pooled together into modern day Homo sapiens, but that does not mean the content is pure; it is a content that is a hybrid, sort of like the mixing pot of America.

The same goes for aborigines/Polynesians with a tiny percentage of Denisovans' DNA. If they ran into a 40% or 60% Denisovan DNA person, they would want to run! That is how much, over time, our ancestors' DNA is worked out of our appearance, though we may remain with a similar skull shape in some aspects, like the aboriginal head shape and Denisovans.

For the most part, we see our fellow humans and milked down hybrids. But what about a more recent hybrid that carries a greater percentage of both parents' DNA? Oh my!

Suppose you had Denisovans (for example) mating through the South Pacific and into the Americas where they were approached by the people who are the ancestors of America's Native People when they arrived here? What if they had only been hybridizing and working out Denisovans traits for the time period man has been here in America? Not much time for a few tens of thousands of years to work out those traits, especially if they are today mating between themselves and keeping that percentage of Denisovan reinforced, let's say. Of course, you can insert any other "ancient" form of man. We are finding "robust" and "archaic" skulls in America. See my slope-headed post.

It is amazing to think how we would feel if we ran into a troglodyte today or even a person who was a hybrid of a troglodyte and Homo sapiens fairly recently.

Welcome to the possible world that Bigfoot inhabits - a glimpse into man's past when he mated with Neanderthal and Denisovans and perhaps other forms of man to create what we today call Homo sapiens.