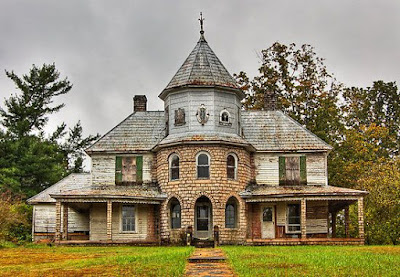 I love abandoned Victorian homes and their once grand splendor. It makes me imagine what might go on inside them now. Here's a series of photos and what comes to my mind, a chilling story, told in one paragraph. 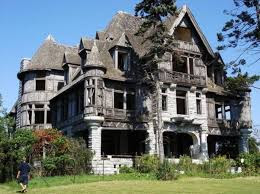 She answered the door for the solicitor, inviting him in for tea and a chat. The teacup was chipped, filled with dust and leaves. The floors were bare. The salesman shifted on his seat that was covered in a white sheet, as were all the furnishings. Somewhere in a room upstairs, a music box played a childhood tune over and over again with false cheer. The vacuum dealer lowered his cup to the saucer only to be startled by a mouse scurrying across the floor, unnoticed by the homeowner. He stood up on quaking legs when his hostess guided him to the door, blocking it with her wide girth. She lifted the veil over her face to his complete and utter horror to find the visage of a monster starting back at him with all its three eyes. 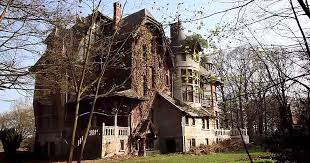 The nesting evil. The gargoyle-like man who roosted in the attic room of the abandoned home. He peered through broken shutters at the walkers by and upon occasion let out a blood-curdling warrior cry. It was said if you breathe while you walk or drive by the derelict structure, the gargoyle would swoop down and eat your soul. How many steps can you hold your breath? One, two, three, four, five, six, seven, eight, nine, ten, eleven, twelve, thirteen, fourteen, fifteen, sixteen, seventeen, eighteen.... 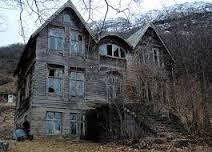 The tattered drifter moved into the abandoned building. At least a few locals who used the road had noticed his comings and goings, upon occasion carrying a squirrel or possum over his shoulder as he entered the rickety building. It wasn't until the trucker who lived at the end of the street drove by one late evening that he realized something. No matter what time of night or day he drove by, there was never light, fire or smoke coming from the structure. So, just how was the occupant eating the kill? 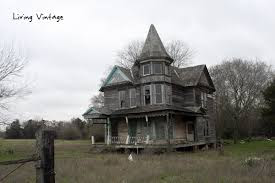 The commercial real estate investors pushed offers at the homeowner, but he never answered. The nice new complex of neat expensive townhouses across the street were forced to face it. Children were afraid to ride their bikes. Women wouldn't walk alone on the sidewalk. And all the time, the owner glared down on them from leaded grimy windows like a gargoyle come to life. 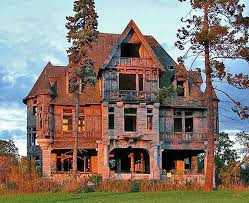 Three generations lived in the house together, huddled in the dark, refusing to use electricity or plumbing. The only visitor was the mail carrier, and he came no further than the beaten down wood box at the end of the makeshift driveway. No one had ever seen them come and go, but there was much speculation. When it dwindled down to one lone family member, a candle burned in the upstairs window for precisely one hour each evening. One night, it was not lit and the town collectively exhaled.... 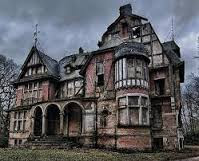 Seven sons of seven sons. Blessing or a curse? The seventh son of the seventh son, Bartholomew, inherited the family home built by the hands of the mighty men that came before him. His Uncle Thaddeus lost a hand while sawing some wood and his spirit still haunts the dining hall. His oldest brother Joseph died when the fireplace they were reinforcing with stone, collapsed upon him, crushing his head. He now haunts the front parlor. And so it was for the seven sons and six of their sons, each dying in the building of the edifice, each haunting a separate room. Bartholomew was never truly alone, nor did he ever repair the home, lest he expire, as well. 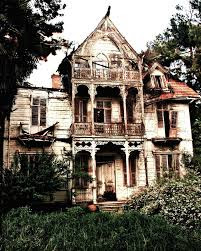 You don't want to go in there! A boy died there in 1944. Jimmy Fitzsimmons. A goofy awkward kid with freckles and pale skin, fiery red hair that the local kids called `Soul Stealer.' The rumors were spread from the moment he was born that if you looked into his weird yellow eyes, he would steal your soul. First his father drank himself to death when he believed his wife must have cheated to produce a ginger. Then, the children in the neighborhood started dying one by one. But, only those that came in contact with Jimmy. His mother put dark sunglasses on him hoping that might ruin the rumors. But, Jimmy was never one to keep them on. Watch it! You don't want to go in there. Stay out! He'll steal your soul, I tell you. Like he stole mine!

If you enjoyed my abandoned Victorian shorts, please check into my favorite nighttime read - my HUGE collection of horror short stories on Kindle and paperback - 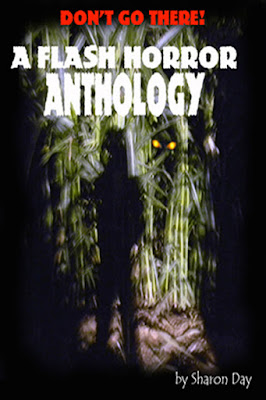 Don't Go There! A Flash Horror Anthology
Got time for a short story? These short stories are timed! This 47,000 word book is an anthology of short stories covering subjects from vampires to werewolves, clowns to gnomes, zombies to scarecrows, and so much more. Sharon Day takes the reader into some dark places the mind doesn't like to probe, some situations that are highly uncomfortable, and outcomes that were unexpected. Her love of atmosphere and mood and the desire to probe at the things we most fear has this writer satisfying your need for dark tales. Each story starts with a short description, the word count and approximate reading time so that the reader can decide if there's time for a story while out and about or curling up in the evening before bedtime. As well, there is a bonus section of short stories based on the author's experiences in places all alone that no one wants to be in after dark all alone.