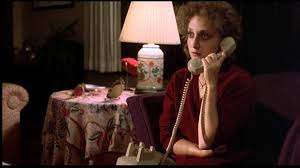 **This post is a guest posting by writer, Jared Hill, a contributor to Ghost Hunting Theories and avid horror enthusiast.**

There’s nothing scarier than the thought of having a stranger in your home; pilfering your prized possessions or possibly even worse. As such, the “home invasion” theme is one that keeps popping up in Hollywood, juxtaposing the fright of a break-in with the banal aspects of everyday existence. We feel safest from the hazards of the outside world when relaxing in the confines of our domiciles, so the mere thought of someone disturbing our solitude is one that strikes fear in the hearts of audiences of all ages. The following five films are especially frightening takes on the home invasion formula.

Released in 1974, Black Christmas is often considered the granddaddy of modern slasher films. A crazy killer makes threatening phone calls to a college sorority house and then actually follows up on his promises of violence by dispatching the inhabitants one by one. The psychological tension created by the masterful pacing have led “Black Christmas” to cult classic status. Olivia Hussey, Keir Dullea, Margot Kidder, Andrea Martin, Marian Waldman and John Saxon head up the ensemble cast.

A “panic room” is a safe room within a house that can be sealed off in case of emergency - when it comes to the safe-keeping of the super-rich, standard home security systems just don’t cut it. Thus the prospect of someone breaking into a panic room is almost a home invasion within a home invasion. This is just the scenario that director David Fincher treats in Panic Room, which hit theaters in 2002. Starring Jodie Foster as a rich divorcee, Kristen Stewart as her daughter and Forest Whitaker as one of a trio of crooks, the film follows the attempts of the criminals to steal millions of dollars in bearer bonds stored within the panic room while Foster tries to hold them at bay.

Starring the stunning Audrey Hepburn and directed by Terence Young, Wait Until Dark (1967) is about three criminals who enter a blind woman's house in search of a doll containing hidden drugs, which made its way to the woman's home through a series of unlikely coincidences. The intruders construct an elaborate story in an attempt to trick her into giving them the doll, but Hepburn's character doesn't fall for the con. Later on, the situation deteriorates into violence, and she has to use all her wits to survive. Many critics complained about the film's numerous plot holes, but Hepburn's performance was widely praised.

2. When a Stranger Calls

When a Stranger Calls, released in 1979, was undoubtedly influenced by number 5 on this list, “Black Christmas.” Carol Kane plays a babysitter who receives scary phone calls from a psychopath played by Charles Durning. While she eventually escapes unharmed, the killer was able to murder the children in the house. Seven years later, the murderer escapes from an institution and seeks to continue his mayhem. The first 20 minutes of When a Stranger Calls was actually previously released as The Sitter and is widely regarded as the finest part of the film. The remainder of the movie is not considered up to the same level of quality.

Director John Carpenter's masterpiece Halloween appeared on the silver screen in 1978. Written in 10 days, shot in 20 and featuring a then-unknown Jamie Lee Curtis, Carpenter's opus surprisingly grossed $70 million worldwide on a budget of around $300,000 and spawned a franchise containing nine more movies. Michael Myers, the silent, malevolent villain who appears to embody evil incarnate, has become a cinematic icon. By setting the action in an ordinary house in small-town America, Carpenter makes it seem like the events depicted could happen anywhere to anyone. Unsettling camera motions and a superb score add to the scariness.

These films stand out as exemplary uses of film to increase realism and heighten audience trepidation, but we may soon see the motion picture take a back seat to other emerging technologies. High-resolution displays, multi-camera setups capable of capturing action in 360 degrees, and sophisticated motion tracking and sensing equipment mean that virtual reality may be the entertainment medium of the future. If viewers gasp with shock and tremble in fear at projections of 2D, filmed material, one can only guess at their reactions when immersed in detailed, responsive and omnidirectional imaginary worlds. Just remember to lock your doors!