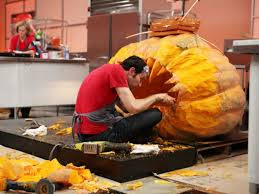 It's that fantastic time again when teams are made up of cake makers and pumpkin carvers to make a Halloween freak's dreams.

Tonight Food Channel is running a marathon of past ones and then tomorrow - NEW SEASON!

Haunted Farm
Five teams made up of an expert pumpkin carver, cake decorator and sugar artist go to battle to create mind-blowing Halloween themed displays that capture a terrifying Haunted Farm. At the end of the battle, one team will be eliminated. Special Guest Judge: Naomi Grossman, who appeared in American Horror Story: Asylum. (Episode: HW0401H)

Don't Go Into The Forest
The four remaining teams go to battle creating mind-blowing Halloween themed displays that evoke the dire warning: whatever you do, don't go into the forest! Special guest judge, film producer Adi Shankar, will help determine which team will be eliminated. (Episode: HW0402H)

Mummies Versus Werewolves
Three remaining teams go to battle to create a Halloween display capturing an epic battle between mummies and werewolves. Special guest judge Francia Raisa will help decide which two teams will move on to the $50,000 final battle. (Episode: HW0403H)

Tomorrow, I will have a post about the new season!