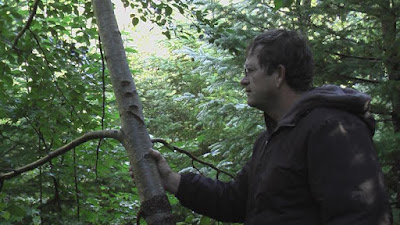 In early October 2008, MK Davis, Don Monroe and Ken Iddins took a trip to Bluff Creek. MK and Don had been there previously a few months prior in August, but there were so many fires, they waited until the place was settled down, and they came back. The three of them were wanting to walk around the site and the area and see if there might still be evidence of Bigfoot inhabiting those woods.

On a previous trip, Don and MK had found a stream not on a map that was either a spring from a cave or runoff from lake or something, having fresh water. The spring was odd because it didn't come into the creek, it went into a hole in the ground. They were exploring the area.

They followed the stream and found some culverts that were talked about in the past, being thrown down the hill by Bigfoot. The culverts were part of a road being laid down in the 1950s and the Bigfoot tried to stop the road building. Footprints found there led to the nickname "Bigfoot." 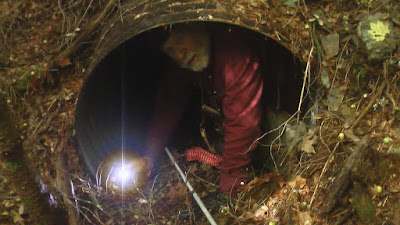 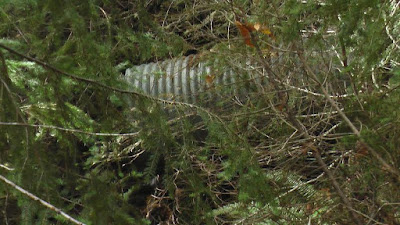 Up the hill from the culverts was an old cat skinner road they took to the film site. On that road they found a "lair." They climbed up 45 degrees and then there was an open level flat area with a waterfall in it and a deer carcass with the bones broken and marrow sucked out. They found fresh tracks in there that measured 15-16 inches. 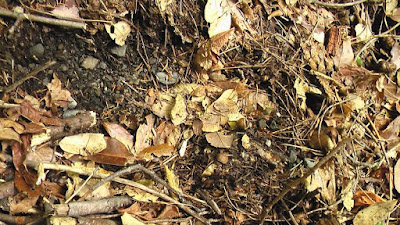 The lair was amazingly well hidden with an ability to peek out and see below. 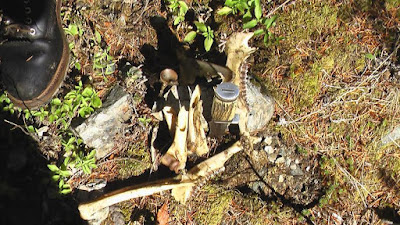 MK came down and crossed to other side and when he got near vehicles, he dropped back into the creek and then he filmed up and down the stream. At the time, MK did not see anything odd. He was a far distance from it. He then walked downstream, on the other side of the creek, and passed by it while it was in the shadows.

This is what he had filmed -

At 3:39 Don and Ken came down in the sunshine area further downstream from the figure one minute later after it was filmed with the white cloth it was working with. The figure was in the shadows of the creek at 3:38. Don was a bit distracted by something over in the shadows in the area the creature was hiding. He is peeling an apple at 3:39. 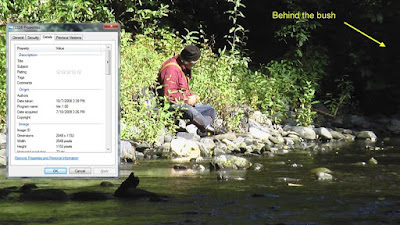 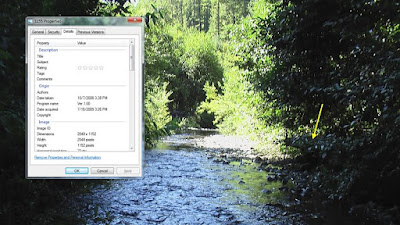 While MK was filming, he did not know the figure was down there from his distance. He came home and he loaned the video to a friend who wanted stock footage. He let him use the Northern California footage for stock footage of the area. It was 2012 by the time the man gave it back to him.

MK rendered it from tape onto the computer and then a busy schedule and family commitments kept him from looking at it.

He sat down recently and he had lost some things on a power outage on the computer and he found the video on an external drive and he loaded it up and looked at it finally. His eye was caught by the cloth it is working with and the contrast had him see the movement, so he started brightening it to see the figure.

MK started moving downstream down the middle of the creek. When he stopped filming, he took some still shots of the creek with the still mode. He got a corner of an elbow showing hair in one shot, another shot didn't have it, the third one (last one) he got it crouched.

The crouched position was intriguing. One knee (right) is tucked in tightly and the left leg is splayed in yoga style and the foot can be seen. The right arm is grasping the tree limb and pulled it down. So, the figure had grabbed the limb, pulled it down as he crouched as a blinder. If this is to be believed to be a Bigfoot, this is perhaps one of the best captures of a Bigfoot utilizing a crouch with plant screen that has been captured.

MK is still going through his stored videos now to see what else he might have incidentally filmed during that trip.

Life is ironic, in that MK Davis was the first to handle and stabilize the Patterson-Gimlin film and has become an expert on the video and its details. That he also spends a great deal of time in the field, as well, makes him a true researcher who examines the context in which phenomena happens. He has been to the Bluff Creek site numerous times and works to understand how it all came together in that moment in time that was filmed in 1967. This trip was an otherwise great hike, interesting finds, and signs of Bigfoot around, but MK had no idea at the time that 7 years later he'd be finding something more from that trek.

Postscript:  In August, a couple months earlier, MK Davis and Don Monroe had gone to the film site at Bluff Creek and found these torn up trees and structures of limbs - 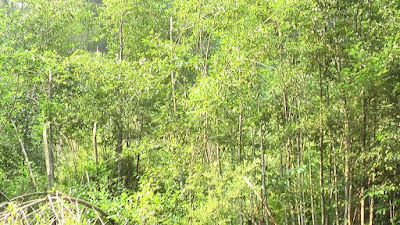 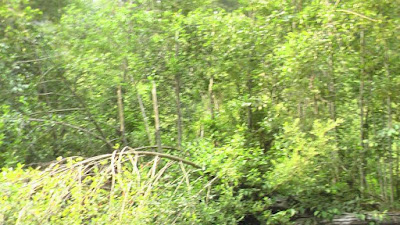 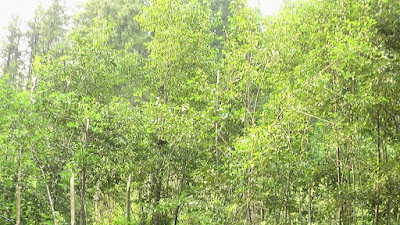 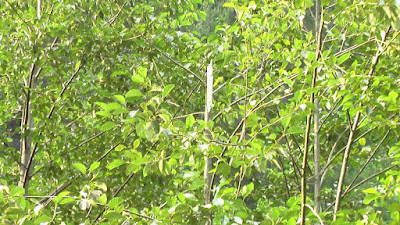 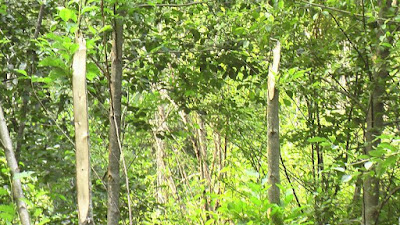 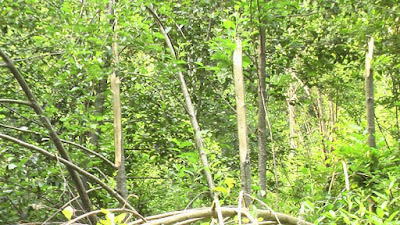 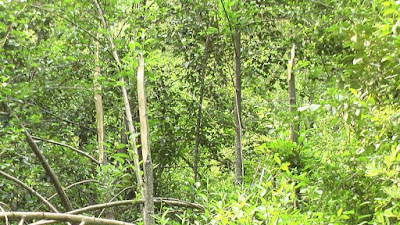 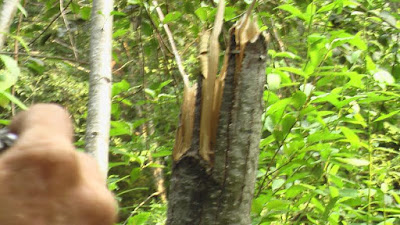 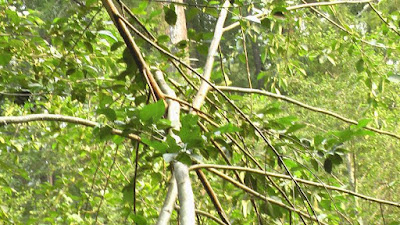 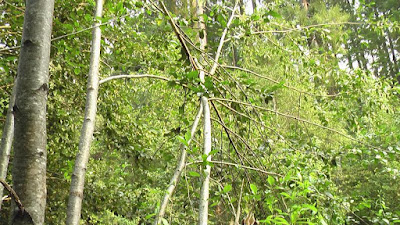 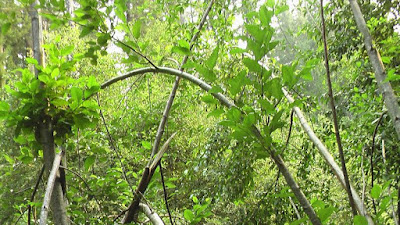 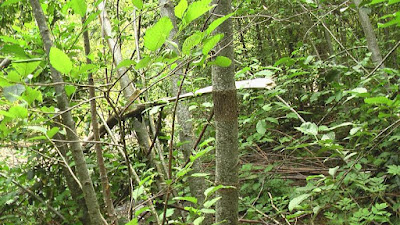 In the middle of the broken work (above) there was a bare place where nothing grew at all - very alkaline, perhaps lime tossed over something. 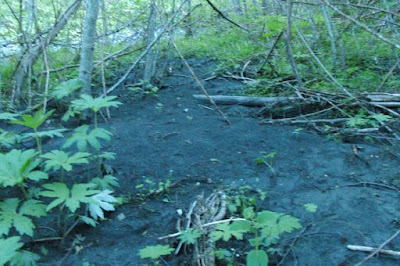 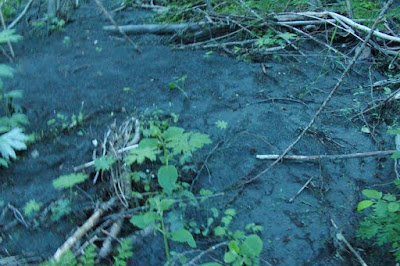 Here was one tree exploded from weight - MK and Don will be on the Bigfoot Central Radio show on Tuesday, September 2, 2015