The Lost Continent of Mu: Home of the Giants? 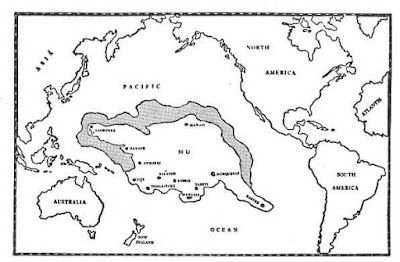 Lemuria or "Mu" is often referred to as a lost continent in the Pacific. Interestingly, we have long pondered how many managed to find his way across. We know that Patagonia tribes were related to the Australia aboriginal people and the Denisovans managed to impart their DNA on South Pacificers, but how? Should this legend of a lost continent be true, it might explain the "wide ocean" treks in ancient times.

Let's begin with the legend of Lemuria. In fact, the Denisovans might be evidence of this. Here's why -

The South Pacificers have legends of their ancestors coming from a continent in the Pacific. Evidence of Denisovans were found in a cave in Siberia. The assumption is that Denisovans, who lived there in the cave where their finger bone and molar were found, lived alongside Neanderthal and Homo sapiens (40,000 years ago), but what if they were from another region and had traveled there? What if the reasons South Pacific people believe their ancestors came from a now missing continent is that they did! Denisovan DNA shows up in people of the South Pacific and Australian aboriginal people and very likely the Patagonian tribes believed to be related to and influenced by the Australian aborigines.

The legend says that these people of the continent of Lemuria were psychic. It was said to be thriving 14,000 years ago which is interesting, as well, because of older and older findings in the Americas of man being there long before the last ice age.

The Lemurians, it was said, realized a great cataclysm or flood was coming. It was said they had thousands of years of warning and were to spread their vast knowledge around the world so that it would remembered in the very cells of the humans. They were also said to have stored information in crystals. These recording crystals were placed in caves deep in the earth. These people began to go underground and live there in protection from the cataclysm. When the floods ended, they emerged.

This reminds me a lot of the Hopi legend of the ant people who emerged from the ground and helped them from a cataclysm. It also reminds me of the legend of the supposed giants tombs in the Grand Canyon that showed they were storing seeds and more as if cataloging their existence. The same was said of the supposed Death Valley giants cave supposedly discovered in the first half of the 20th Century in which supposedly animals were stored to archive, as well.

It was said that holy people around the earth went underground during that time. This is really intriguing to me because we speak often of very purposeful sites of stone megalith monuments and their purpose. What if their purpose was to mark the entry point at which these holy people entered the earth in their hiding. Perhaps this would have been a way to mark the site of their ancient civilization and perhaps if we latter humans figured it out, understand these are entry points, not necessarily some ancient astronaut construct.

Source: Many believe that Easter Island was part of Lemuria. Its hundreds of colossal stone statues and written language point to an advanced culture, yet it appeared on the world’s most remote spot. The legends of Easter Island speak of Hiva which sank beneath the waves as people fled.

Source:  The Lemurians were said to be between 10-15 feet tall, had skins resembling alligator hides, faces with protuberant mandibles, small eyes, and sides of the skulls were elongated, double-jointed limbs. (*I am reminded of the witness reports of Bigfoot dropping to hands and feet and making leaping quadrupedal locomotion a lot like a rabbit)

There is an ongoing legend of Mt. Shasta that it is a portal that the Lemurians emerge from.  In Northern California, just about 45 miles from Oregon, is Mt. Shasta. To many legends and mystics, it is considered the single most sacred place on earth and a sort of portal to many worlds. People believe that, even today, the Lemurian ancestors live under Mt. Shasta in vast tunnels. There many beings attributed to both the caverns and the outside of Mt. Shasta including the Bigfoot and the "little ones."

Source:  Wondrous little people, often referred to as “The Little People of Mount Shasta”, are also kind of physical, but not quite, and they are very often seen visually around the mountain. They are third dimensional beings like humans, but they live on a slightly higher level of the third dimension, such as third and one half level, and they have the ability to make themselves visible and invisible at will. The reason they are not showing themselves physically to many people is because they have a collective fear of humans. At one time, when they were as physical as we are, and could not make themselves invisible at will, humans living at that time viciously maligned them. They became so fearful of humans, that they collectively asked the spiritual hierarchy of this planet for the dispensation to be elevated in their frequency, so that they could make themselves invisible at will, in order to be able to continue their evolution unharmed and in peace. (*this reminds me of shadow people - little figures who think they are not seen, but when they are, they disappear)

What can we make of the Lemurian continent often referred to as "Mu"? Well, the legends are spread throughout Polynesian culture and even Native American culture of this continent and these advanced people. As well, many stone megaliths and even creatures are shared by this area from places considered as not having access to each other. If man was in the Americas long before the last ice age, how did they arrive? Were they brought over on Lemurian boats from the big continent to ours? Was our continent connected to Lemuria by a land bridge that was more navigable than the far north?

Researchers have recently discussed how ancient man traveled east west or north south depending on the continent's mountain ranges to avoid the high climbs. Wouldn't he also do so to avoid icy inhospitable locations if he had another land/sea option?

If you're curious and want to learn more, here are some interesting videos to whet your appetite for this intriguing subject. I had never given this lost continent much thought but it seems to in many ways to answer some very unusual questions about our world, things that have not added up. I hope to cover more on this in the future including whether or not the Bigfoot People are descendants.

(go to 13:45 to hear about Lemurian description, eye on back of head - Cyclops?)