The Horror Novel I've Waited For! 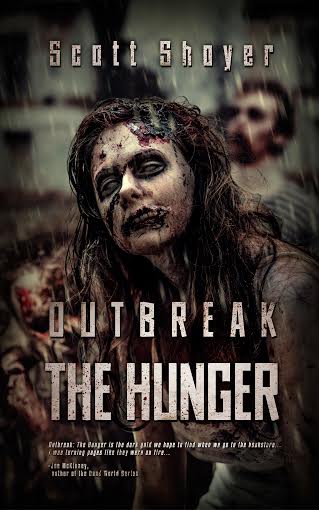 I got to be friends with a blogger whose blog I adored, Anything Horror Central. Scott was not just a lover of horror and a really great movie reviewer, but he was also an author. We encouraged each other in our writing endeavors back then. He even won a short story contest on my blog.

He let me read a novel he had written. I could not put it down and it haunted me for years. I bothered him to get it published and he was smart enough to be picky about who was going to publish it. When he found Severed Press, he was ready.

I am thrilled to announce Outbreak: The Hunger is out now for purchase and it is a stunning read. If you love horror, this has to be in your collection. Scott is not just talented with words, but characterization, setting, mood, and he is not afraid in the least to take horror to great levels of action and terror, and places some authors are too scared to even consider in their darkest recesses.


Austin, TX, April 14, 2015 – Scott Shoyer, a local Austin, Texas author with a wicked mind for horror, has just had his debut zombie novel, OUTBREAK: THE HUNGER, published by Severed Press. Shoyer’s novel was released on April 14, 2015 and is now available in paperback and eBook formats.

OUTBREAK: THE HUNGER is a fast-paced, gory look at events leading up to the outbreak of a zombie virus. This virus, Shoyer promises, is one you haven’t seen before. The story unfolds from the perspective of two separate groups of people: An elite group of soldiers acting “Above Top Secret” that try to identify and stop the outbreak, and a group of families visiting the Austin Zoo, where the outbreak begins to spread. Trapped at the zoo, the small group of visitors must band together to try and survive the deadly outbreak. Survival, though, won’t be easy especially since they are at ground zero!

Joe McKinney, the author of the DEAD WORLD series, had the following to say about Scott Shoyer’s debut novel:

“Not only is [OUTBREAK: THE HUNGER] the kind of wild ride you expect from good old fashioned horror, but it is a zombie novel with a truly original take on the genre. I guarantee you, the story has not been told this way before. I envy you getting to read it for the first time.”

Being a lifetime fan of horror films and novels (especially zombies), Shoyer was able to avoid the clichés that have become standard fare in this sub-genre and managed to pump some fresh blood and brains into the genre.

Shoyer is hard at work completing his follow up to OUTBREAK: THE HUNGER, which will be a direct sequel that takes place two years after the events of the first novel. He promises even more craziness, blood, brains, and gore.