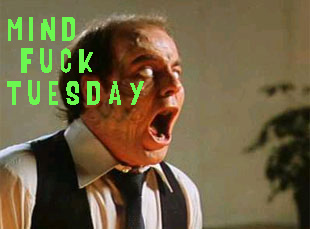 This month, I'm picking up my popular series, "Mind Fuck Tuesday" where I toss out an interesting an unusual theory for you to mull over.

Today's concept involves alpha brain waves and if they are the key to encounters with the dead and with aliens.

Alpha is a brain wave state in which we obtain great creativity and is also that floaty feeling we have when we are falling asleep and first waking up. In other words, it is an open-minded and receptive mind state. This brain activity is centered in the occipital lobe which is also the part of the brain most associated with seizures. We also use alpha waves during our REM sleep, aka dream sleep. It is associated with a wakeful period during sleep. These waves originate, however, in the frontal central area of the brain. Alpha waves are utilized in the purpose of biofeedback, being able to maintain your body in a relaxed and comfortable state and your mind relaxing and being more adrift. When we are daydreaming, we are often producing alpha waves.

I find this above statement interesting because alpha brain wave state, as you are drifting in and out of sleep, when you get those amazing ideas you just must write down, that floaty feeling, is when you get visitations from both aliens and the dead. And, creative people most often report these encounters. Is it because they are creative, or because they have powerful alpha state?

In fact, people who were faced with dysfunctional upbringings often adjusted to the dramatics by learning escapism in daydreaming and fantasies of what will be different when they have control of their lives as adults. Those who learned these escape techniques were essentially learning to create big bursts of alpha waves in their brains. They are problem solvers, adaptable, creative, and intuitive. I have yet to meet any true intuitive who did not grow up in chaos or go through immense life trials.

Alpha waves can be taken a step further in the incidence of psychokinesis or poltergeist activity. The parapsychologist, Barry Taff, mentioned at a lecture that poltergeist activity happens more often with people with occipital lobe epilepsy. But, what of people who put out more alpha waves in that region of the brain?

Now lets look at what we do on ghost investigations: We sit or walk in the dark, studying the building, keeping our senses open, but with lack of light, creating an abundance of alpha wave activity as our minds seek to coordinate senses with one of them very diminished. We see an apparition, we hear a voice, we feel a tug at our hem - these are all perhaps facilitated by the increase in our alpha wave bursts. Our very perceptive seat or psychic sensitivity may depend upon alpha waves.

You lose a loved one and you finally manage to get yourself to bed to try and get a decent sleep after all the loss and grief. You lay there, your body beginning to sink into the mattress, your eyes close, you give in to the sleep state when you open your eyes and at the end of your bed in the filtered light from the blinds, you see the shape of your deceased loved one standing there. She communicates a message of love and comfort to you and then melts into the hazy darkness. You just experienced a visitation from the dead.

The majority of people who experience encounters with dead loved ones and with aliens, do so in the bedroom. Although we can produce alpha waves all the time, we produce more in the resting state and it begs the question - do we have hallucinatory encounters in that drowsy state or are we more receptive to communication in that state?

Here's yet another interesting combination - darkness and alpha waves. When it gets dark, our pineal gland (referred to as our "third eye") is in charge of releasing melatonin, a sleep-inducing hormone. You combine a ghost investigation in the dark with a creative mind state or a person in bed preparing for sleep and BINGO!  You have a dynamic duo of hormones and alpha state, perhaps working together to make us in that perfect state to communicate with from other realms.

I discussed in one of my vlogs about how to know there are spirits around you and one of the things I discuss is how you turn your head in the middle of something and drift off like you are daydreaming. It is in that alpha state that you are being pulled to attention by the dead. You turn your head to disengage from your usual analytic mind, and probe the alpha waves to make this connection. You may not know you are connecting or have a sense of it, but a very intuitive part of you recognizes and interacts with the dead and you are not even aware of it. It's like they touch you and you touch them back.


More info:
Psychics and alpha waves
Why the dead visit us at night