Archaeological Finds - Out of Place: Out of Time

There are items dug up from around the world that baffle and confuse the experts and are referred to as Ooparts (out of place artifacts). When these items do not fit into researcher's belief systems and their school training, they find ways to explain them away and negate any evidence of extraordinary find.

The Klecksdorp spheres are often referred to as an out of place/out of time item. These spheres have been found in mining areas in South Africa in 3-million-year-old deposits. Many believed them to be metallic man-made items of extremely ancient construction. Scientists, however, came to the conclusion that these were made naturally and were formed in volcanic sediments over millions of years and the grooves created by fine grains over time and growth.

Disputes about extraordinary claims made online have been active and vehement. It would seem that the case for Klecksdorp spheres being man made has been closed. 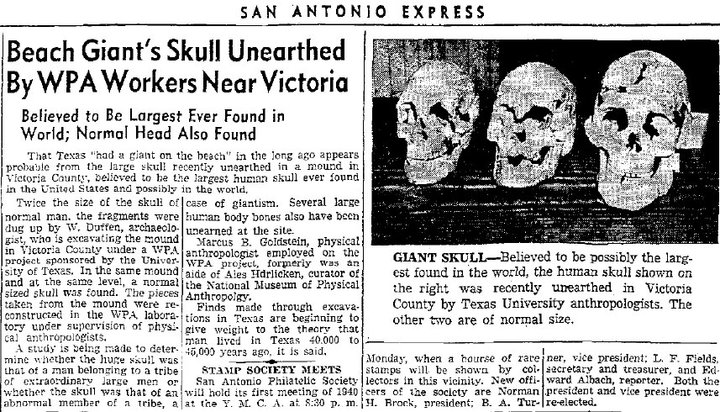 The skull (above) found in Texas in 1939 was reported in the paper in 1940. This was located in the Morhiss Mound, Victoria, Texas.  When the university was asked about the skull, they found papers about it, but could not locate the skull, it apparently went missing.

Source:  A physical anthropologist Marcus S. Goldstein says in his manuscript; "A couple of unusual crania were unearthed at Morhiss Mound in Victoria County. One of these, although much mended and its base quite warped, is nevertheless obviously a skull of extraordinary size, in many respects larger than any yet reported."And it was not only one for he added: "Moreover, other crania from the same site approximate the skull in question. Hence, it is my opinion that this exceptionally large skull was not the result of endocrine pathology." 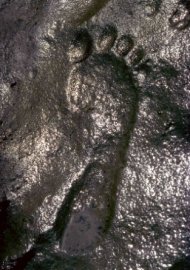 Source:  The Image (right) is from the Zapata track, found in Permian limestone in New Mexico. In 1987, not far from the Zapata track site, paleontologist Jerry MacDonald discovered a variety of beautifully preserved fossil footprints in Permian strata. The Robledo Mountain site contains thousands of footprints and invertebrate trails that represent dozens of different kinds of animals. Because of the quality of preservation and sheer multitude of different kinds of footprints, this tracksite has been called the most important Early Permian sites ever discovered. Some that have visited the site remark that it contains what appears to be a barefoot human print. "The fossil tracks that MacDonald has collected include a number of what paleontologists like to call ‘problematica.’ On one trackway, for example, a three-toed creature apparently took a few steps, then disappeared--as though it took off and flew. 'We don't know of any three-toed animals in the Permian,' MacDonald pointed out. ‘And there aren't supposed to be any birds.’ He's got several tracks where creatures appear to be walking on their hind legs, others that look almost simian. On one pair of siltstone tablets, I notice some unusually large, deep and scary-looking footprints, each with five arched toe marks, like nails. I comment that they look just like bear tracks. ‘Yeah,’ MacDonald says reluctantly, ‘they sure do.’ Mammals evolved long after the Permian period, scientists agree, yet these tracks are clearly Permian." 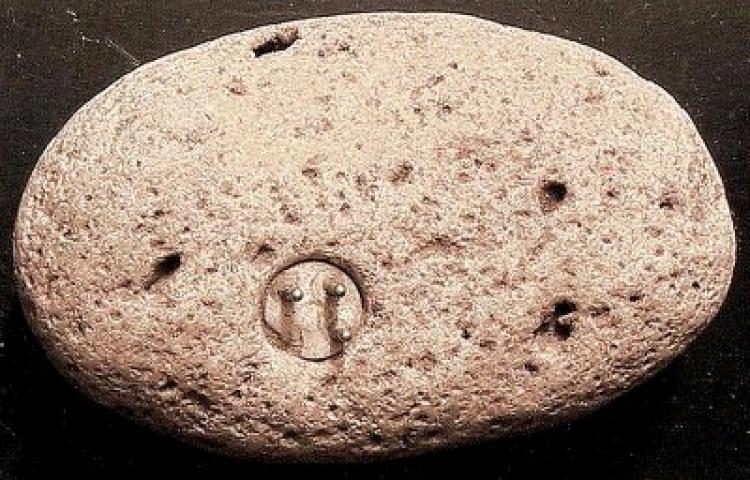 In 1998, an electrical engineer, named John Williams, was walking along and saw what looked like a piece of electronic trash on the ground. He tried to pick it up, but it wouldn't budge. When he dug around to get to it, he found it embedded in a rock. The finder would only say it was in a rural area in America. He worried others might come and dig up the area and make off with other artifacts.

Analysis of the rock aged it at 100,000 years and when examined closely, it showed that this was truly embedded in the rock and not somehow chiseled into place or lodged into it from outside.

Source:  After the stone was found, geological analysis found it to be about 100,000 years old—a technical impossibility according to conventional understanding of mankind’s technological development.  The instrument caught in the Petradox has been compared by some investigators to an electronic XLR connector or similar component. It presents a weak magnetic attraction, and ohm meter readings reveal that it has a strength approaching that of an open circuit. The three-pronged plug is held by a matrix of a thus-far indeterminable origin. The 0.3-inch diameter piece does not appear to be manufactured out of wood, plastic, rubber, metal, or some other recognizable material. While Williams forbids the specimen from being broken open, he has employed a powerful X-ray, revealing that the matrix component extends into an opaque internal structure within the stone.