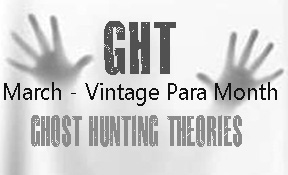 Urban legends - tales that gather more and more steam with the telling, are cautionary tales that are passed around in hushed tones and voices that swear that they are truth, they really happened!

The 1950s really launched a decade of car-driving youths with a certain degree of anxiety of making adult decisions and too much time on their hands. Urban legends were born from this atmosphere, much like Native tales of the past that admonished children to beware the giant that would eat those who wandered.

"The Hook" is perhaps the most repeated legend from the 1950s. The story has been reshaped many times but the basic gist is this -

A teen boy asks a girl out, they drive off to Lover's Lane and park. Over the radio, a newscaster warns that there is an escaped mental patient with a hook for his right hand.

The girls starts hearing a scratching sound and gets scared and begs the boy to drive her home. He wants to make out. Finally, she begs and he relents and drives her home. When the arrive, he comes around to open her door, she climbs out and they find a bloody hook in the roof of the car.


Killer in the Back Seat

The legend of the "Killer in the Back Seat" begins with a woman driving in her car when someone flashes their lights at her, perhaps drives up beside her and gestures wildly, scaring her as they try to make her pull over. The woman eventually loses them and gets to a gas station where the attendant goes to fill the tank. The attendant tells her there is a problem with her card and could she come inside and clear it up. When she goes inside, he tells here there is a man with a knife in her back seat.

If you are noting a car-themed bunch of vintage urban legends, there is a reason. Post WWII children were getting cars and driving during a prosperous time in our history.  Admonishing the youth to be safe on the scary open road came in the form of cautionary tales. Children were leaving neighborhood safety and people they know, and running into all kinds of crazies out there.

The vanishing hitchhiker is a story that passes through all states and all have the same theme; a person stops for a hitchhiker on a stormy night to help out a fellow citizen. They carry on a conversation, drive along to the destination, and along the way, the passenger goes missing - poof! Vanished! This leaves the driver to wonder if they had just imagined the entire encounter.