In 1928, a man named Atlas Almon Mathis was a miner working in Oklahoma looking for coal. Here's his story of his find -

“In the year 1928, I, Atlas Almon Mathis, was working in coal mine No. 5., located two miles north of Heavener, Oklahoma. This was a shaft mine, and they told us it was two miles deep. The mine was so deep that they let us down into it on an elevator. . . . They pumped air down to us, it was so deep…

“…the next morning there were several concrete blocks laying in the room. These blocks were 12-inch cubes and were so smooth and polished on the outside that all six sides could serve as mirrors. Yet they were full of gravel, because I chipped one of them open with my pick, and it was plain concrete inside. As I started to timber the room up, it caved in; and I barely escaped. When I came back after the cave-in, a solid wall of these polished blocks was left exposed. About 100 to 150 yards farther down our air core, another miner struck this same wall, or one very similar.

“The coal in the mine was probably Carboniferous, which would mean the wall was at least 286 million years old.”

According to Mathis, the mining company officers immediately pulled the men out of the mine and forbade them to speak about what they had seen. Mathis said the Wilburton miners also told of finding “a solid block of silver in the shape of a barrel… with the prints of the staves on it,” in an area of coal dating between 280 and 320 million years ago. What advance civilization built this wall?… Why was the truth, as is so many of these cases protected and hidden?… What is the real truth about time travelers, modern humans, and modern technology in our past?”

Are there any other cases of ancient finds in Oklahoma to support this supposed find?

Source: Iron Cup from Oklahoma Coal Mine, 312 million years old. On November 27, 1948 the following statement was made by Frank J. Kenwood in Sulphur Springs, Arkansas. "While I was working in the Municipal Electric Plant in Thomas, Oklahoma in 1912, I came upon a solid chunk of coal which was too large to use. I broke it with a sledge hammer. This iron pot fell from the center leaving the impression mould of the pot in the piece of coal.
Jim Stall (an employee of the company) witnessed the breaking of the coal, and saw the pot fall out. I traced the source of the coal, and found that it came from the Wilburton, Oklahoma, Mines. According to Robert O. Fay of the Oklahoma Geological Survey, the Wilburton mine coal is about 312 million years old. 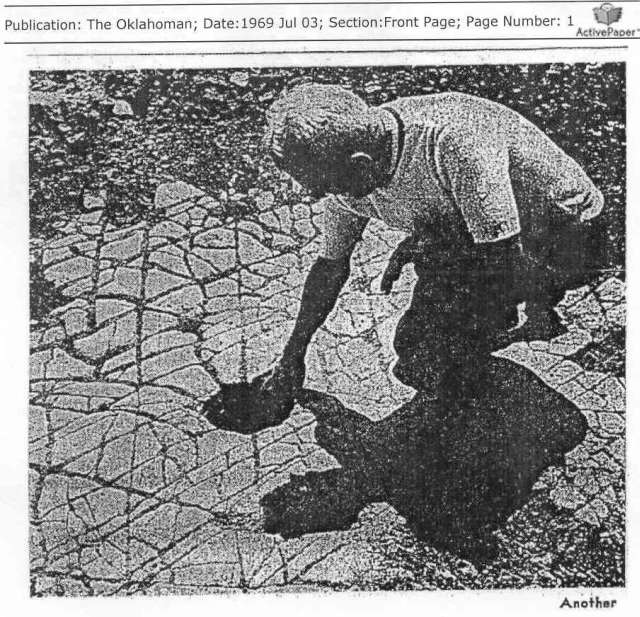 Source:  "On June 27, 1969, workmen leveling a rock shelf at 122nd Street on the Broadway Extension between Edmond (population 68,315) and Oklahoma City uncovered a rock formation that caused a great deal of controversy among investigating authorities."

"To the layman, the site looked like an inlaid mosaic floor. It apparently looked very much like someone's floor to some of the experts, as well."

"'I am sure this was man-made because the stones are placed in perfect sets of parallel lines which intersect to form a diamond shape, all pointing to the east,' said Durwood Pate, an Oklahoma City geologist who studied the site. 'We found post holes which measure a perfect two rods from the other two. The top of the stone is very smooth, and if you lift one of them, you will find it is very jagged, which indicates wear on the surface. Everything is too well-placed to be a natural formation.'"

"Dr. Robert Bell, an archaeologist from the University of Oklahoma, expressed his opinion that the find was a natural formation. Dr. Bell said that he could see no evidence of any mortaring substance. But Pate, on the other hand, was able to distinguish some kind of mud between each stone."

"Delbert Smith, a geologist, president of the Oklahoma Seismograph Company, said the formation, which was discovered about three feet (0.9 meters) beneath the surface, appeared to cover several thousand square feet."

"The Tulsa World quoted Smith as saying: 'There is no question about it. It has been laid there, but I have no idea by whom.'"

A mosaic floor covering "several thousand square feet." Obviously, it was the remains of some prehistoric palace. Did an ancient city once stand on the site of what is now Edmond, Okla.? And who could have built it? Travelers from prehistoric Lemuria? Settlers from the lost continent of Atlantis? Or maybe a wandering tribe from the weird Lamanite civilization mentioned in The Book of Mormon.

Thirty-six years after its discovery, there are still no definite answers about the "mosaic floor" found in Edmond, Okla.

It seems that Oklahoma has some stories of exceedingly ancient man-made structures, but it also is not very forthcoming with actual proof, only anecdotal stories and a photo from a newspaper article. Without any real observation of the actual structures and items, we can't come to any conclusions. What we do know is that Oklahoma has an extraordinary geology which also means that man has spent a lot of time digging in mines and drilling for oil in this region and it goes kind of like this: Before man did recreational swimming, there were almost zero shark attacks, but once man started jumping in the water and swimming in droves, he became a target. When man realized that Oklahoma had extraordinary resources, he tapped it and the more he dug up the land and into the hills, he was bound to make ancient discoveries. I suspect in coming decades, as we continue to tap resources, we will find more and hopefully this time it will be handled properly to learn its true archaeological or geological worth.

Books:  Forbidden Archaeology, The Hidden History of the Human Race by Michael A. Cremo and Richard L. Thompson
Worlds Before Our Own by Brad Steiger