The Era of the Ancient Giants In America

Source:  In the summers of 1992 and 1993, Overstreet and Joyce conducted digs at Schaefer. Within three days, they found what they were looking for. Their discovery was spread across the pages of the Chicago Tribune. "All of a sudden, this poor farmer has people driving through to look at this mammoth," says Overstreet. "... He was very close to throwing us off the property."

As the digging continued, John Hebior, a farmer across the road, walked to the site with something to show the scientists. "Here, this is from my field," and he handed the team more mammoth bones. They returned to the Hebior site in 1994 and discovered that this mammoth also had been butchered, bringing the tally to four known butchering sites in Kenosha County.

The bones found were well preserved and the cut marks were easy to identify. Joyce reasoned this in the fact that, "More than 12,000 years ago, Kenosha County was 30 percent marshes, lakes and rivers. Virtually all the animals found were associated with water in some way. Because marshes allow very little oxygen to penetrate the soil, the layers of sediment that can preserve animals and plants remain much longer." Joyce and Overstreet were able to take spruce twigs from the Kenosha sites that were more than 12,000 years old, cut them open and look at the wood inside; they looked as if they had fallen from the tree just days ago.

To analyze the markings on the bones, Overstreet and Joyce called in expert Eileen Johnson, curator of anthropology at Texas Tech University. Johnson concluded that two different human tools were used to butcher the prehistoric animals, one for cutting and the other for shaving the meat from the bone.

According to Overstreet, the number of human remains in the Americas, dating back 9,000 years or longer can be counted on one hand.

The era of the ancient giants in America take us back tens of thousands of years ago and more and more site are being found that push dates of humans in America back more and more. The question becomes, how do we segregate what was giants and what was Amerind people? Even today, the Native People are handed over ancient finds in America that involve human remains, assuming that these tribes, who shifted territories and many who were here not that long ago, are somehow related. Some cases are blatantly unfair to make an assumption today's tribes have any relation to these people. 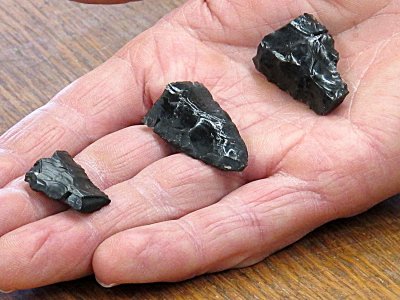 Discovered in Paisley Caves in Oregon were stemmed points and human excrement of ancient origin. What they found, however, was something puzzling that, once again, leads back to the concept that there was another culture here when Homo sapiens from Asia arrived in the Americas long ago.

Source:  "From our dating, it appears to be impossible to derive Western Stemmed points from a proto- Clovis tradition," Jenkins said. "It suggests that we may have here in the Western United States a tradition that is at least as old as Clovis, and quite possibly older. We seem to have two different traditions co-existing in the United States that did not blend for a period of hundreds of years."

Regarding the oldest known burial in America, once again I hear the interesting use of the word "human" which is entirely unnecessary to say. (I have previously seen another researcher mention human repeatedly when comparing "second migration" to America versus the "unknown species" that was first migration).

The skeleton of the Clovis child—which experts determined belonged to a young boy about one to one-and-a-half years old—was discovered in 1968 in the Anzick burial site in western Montana. Dozens of ochre-covered stone tools found at the site were consistent with Clovis technology, and radiocarbon dating revealed that the skeleton was approximately 12,600 years old.

The Anzick skeleton "is the oldest burial in North America, and the only known human burial associated with the Clovis culture," Waters said.

In Fallon, Nevada in 1940, in a cave called Spirit Cave, a husband and wife archaeological team discovered the oldest mummy in America. They were wrapped in tule fabric. The relics found with them were put on display at the Nevada State fair, but then stored away in a facility from viewing eyes for over 50 years now. The mummies were said to be 9400 years old by radiocarbon mass spectrometry.
Regarding a find of a skull at Spirit Cave in Nevada, it was handed over to the Paiutes, even though they readily admitted that it pre-dated them. There have been legal issues back and forth.

The BLM (Bureau of Land Management) wrote up a paper about why they believe the Pauite-Shoshone Tribe should not have the remains: Based on a review of the evidence from the tribe, as well as the evidence gathered from other sources, the BLM has concluded that the preponderance of the available evidence demonstrates that the human remains from Spirit Cave are appropriately considered to be unaffiliated with the Northern Paiute, i.e., the remains predate contemporary Northern Paiute tribes and cannot reasonably be culturally affiliated with any of them. Thus, the BLM has determined that the
remains from Spirit Cave are unaffiliated with any modern individual, tribe, or other group and
are therefore culturally unidentified.

Source:  Interestingly, D.Gentry Steele's (Dept of Anthropology, Texas A and M) analysis said the skull was consistent with other earlier American occupants, but not modern Indians (vague about these other earlier Americans, but it's obvious the scientific community is extremely aware of them and afraid to say that the Amerind people are second migration). And MORE tantalizing, he added, "the grave associations tied to the ancient dates do not show any demonstrable relationships to the historic material culture of any living Native Americans...as far as the scientific data reveal so far, there are no direct descendants of the early Americans living today."

The mummy found in Spirit Cave dated at 9270 BC and the Paiute arrived around 1000 AD.

Glyphs: ("National Geographic" link) The carbonate ages, combined with an analysis of sediment cores taken from neighboring Pyramid Lake, suggest that the boulders were exposed to air—and thus accessible for carving by humans—between about 14,800 to 13,100 years ago, and again from about 11,300 to 10,500 years ago. In between the two time periods, the boulders were submerged, the scientists say. Scientists say they have found genetic evidence that a first wave of migrants (*interestingly chosen term "migrants") crossed into the Americas from Asia about 15,000 to 18,000 years ago by slowly creeping down the continent's coasts. A few thousand years later, according to the study, a second wave of humans (*now they differentiate with the term "humans") entered North America, this time by slipping across the Bering Strait into Alaska and then crossing through an ice-free corridor into Canada.

Another great example of the varied people living in America comes from the bog people of Windover, Florida. As many as 168 burials were found of ancient origin in peat bogs in Florida. Amazingly, half of these skeletal remains had brain matter still within, giving us a window into these mysterious people dating back 7000 to 8000 years ago.

The skull was immediately European-like; long, narrow, very constricted behind eyes with a very prominent nose. I immediately got the impression I was dealing with a European—probably an early Kennewick pioneer. I had no idea where this story was going at that point. The skull, the bridge of the nose is very prominent, the skull very narrow, recedes to the back—the kind I had only seen among the people of western Eurasia. Very long limbs, his lower limb segments quite long compared to the upper; and American Indians tend to be quite the opposite. They’re short limbed. We’ve got this paradox—Stone-Age object in European man [sic], after the carbon dating reports were in.

On studying the DNA - “Since the haplogroup frequency distribution of the prehistoric Windover population is unlike that of any known surviving or prehistoric group, they may represent the only demonstrated instance of the recent extinction of a group of Native Americans with no close surviving relatives.”  In fact, the DNA had European characteristics.

It would appear that there were people from all over in America who may have had no relationship. The Yaghan people of the remote Cape Horn tip of Argentina were found to have a different origin than other American tribes. We can make no assumptions that ancient people here were related, but that many types of ancients lived in the Americas.

It shouldn't be any wonder that this melting pot has always been such. The first innovative people to trek to this region did so with great bravery. Were the European-like people of the Florida bogs evidence of European people going across the straits with the Asians who would become the Native American tribes, or were they brought here as slaves by a giant people? No matter how we look at this mystery of ancient remains in America, we must come to the conclusion that the lands have been claimed by many for many eras and not necessarily genetically associated.