(Copper mining around the world - above)

Peruvians tell of giants arriving and building water wells, eating their men, raping their women and sodomizing each other until God killed them with a mighty sword.

Today, we find the remains of amazingly built water wells of ancient times, elongated skulls with red hair. As well, in Arizona/California/Nevada, red-haired giants reported, giants found in caves and in the ground in copper mining areas. The moundbuilders of the Upper Midwest mined copper in Michigan, traded up and down the Mississippi with the people of the Gulf area. Remains of giants have been found extensively in that region.

When 1500s Spanish explorers went from Florida to the west along the Gulf, they encountered the Karankawa Indians in Texas who told them they got their copper implements from trading with the north. The northern copper mines were no doubt mined by Native American tribes who had claimed what was begun by the giants long ago and taught to them.

Let's look at copper mining around the world:

Wales:  Great Orme Mines were found to not only be ancient mines, but to have ancient hammers inside that were of enormous proportions, much too heavy for a person to swing.  It has put out tons of copper since the Bronze Age which began around 4000 BC.

Michigan:  Around 5000 BC time period, apparently Natives were mining copper in Michigan, according to the popular stories passed about in our history books. Yet, the remains of ancient giants have been found here and many of the large populations of giants uncovered were in the surrounding Great Lakes area. By the time the first European explorers arrived, the area was the home of the Chippewa people, who did not mine copper. According to Chippewa traditions, they had much earlier supplanted the original miners (Wikipedia).

Wisconsin:  Prospectors of the l850s recalled finding overgrown pits they attributed to earlier mining attempts. William Howenstein, prospecting west of the Brule River in l853, discovered evidence of indigenous mining at the site of the later Percival Mine. There he found, "considerable masses of virgin metal...partly removed from the parent rock with a stone maul." In l865 August Zachau made a similar discovery of "Indian diggings" on his Douglas Range property a few miles south of Superior. The pits were found 30 yards apart on a "vein" alleged to contain good "mineral indications." Zachau reported stone hammers "large and small" around these pits. He brought one such stone hammer to Superior and put it on display for the curious to see.  Farther west at Copper Creek indications of indigenous mining was noted in l873 by state geologist Edmund Sweet. Examining bedrock along the stream, Sweet discovered a pit he ascribed to prehistoric miners. Under the soil in the pit's bottom he found several small boulders, some of which apparently had been used as hammer stones. From George Stuntz, who first surveyed much of the region, Sweet learned of similar old pits near Little Manitou Falls, today located inside Pattison State Park. In the debris surrounding these pits Stuntz had found a broken stone hammer. In his report Sweet wrote, "there is...little doubt that this district was 'prospected' by that strange pre-historic people, whose greatest efforts at mining were apparently upon Isle Royale." In l899 and l900 Northwestern University professor Ulysses Sherman Grant inspected and reported upon the copper-bearing rocks of northwest Wisconsin. In his notes Grant recorded some "very ancient" attempts at mining west of the Bois Brule River. Gerald Stowe, a former curator of the Douglas County Historical Museum, also referred to prehistoric mining pits near the Brule. Another historian, Charles Emerson, spoke of ancient pits on the Minong Range. None of these reports, unfortunately, were specific as to exact location nor did they provide further details.. 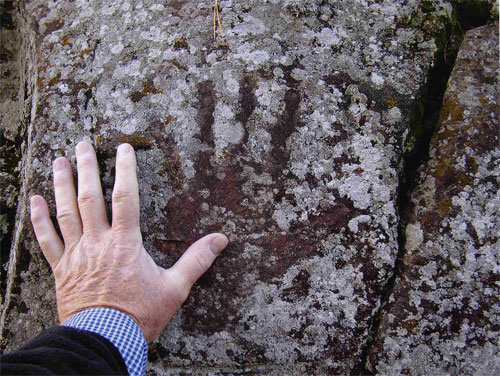 COPPER:  The Bronze age was based on the making of bronze, the main ingredient being copper - Europe had a “Bronze Age”, archaeologists have accepted that much more copper was used than what they have been able to attribute to European mines. So where did an extremely large part of the copper come from? The answer, as bizarre as it may sound, could be America.  In the State of Michigan, the largest mine was on Isle Royale, an island in Lake Superior, near the Canadian border. Here, there are thousands of prehistoric copper pits, dug thousands of years ago by ancient peoples unknown. The Minong Belt on Isle Royale has a distance of one and three quarter miles in length and is nearly four hundred feet wide. The copper pits range ten tot thirty feet deep with connecting tunnels; one archaeologist estimated that their digging would take the equivalent of 10,000 men working for 1000 years.

The Menomonie Indians of north Wisconsin possess a legend that speaks about the ancient mines. They described the mines as being worked by “light skinned men”, who were able to identify the mines by throwing magical stones on the ground, which made the ores that contained copper ring like a bell. This practice closely resembles a similar practice that was used in Europe during the Bronze Age. Bronze with a high concentration of tin indeed resonates when a stone is thrown against it. The legend might have confused the start of the process with the result of the process. Even so, S.A. Barnett, the first archaeologist who studied Aztalan, a site near the mines, believed that the miners originated from Europe. His conclusion was largely based on the type of tools that had been used, tools which were not used by the local people.

Apparently, one instance of identification by silver inclusion has occurred overseas: In this letter of December 1st, 1995, Palden Jenkins, a historian from Glastonbury, writes, “I met the farmer who owns the land on which a megalithic stone circle is, called Merry Maidens, in far west Cornwall. While clearing hedges, he discovered an arrowhead, which was sent to the British Museum for identification. The answer returned: ‘5,000 years old; source, Michigan, USA’.” (Ref.76).

Peru and Chile also popular copper mining areas had lots of red-haired giants in their archaeology finds. A mummy dated at about 550 A.D. which was found trapped in an ancient mine shaft by a fall of rock.

Other popular mining areas of the west from Arizona to California to Nevada have also coincidentally been the locations of lots of ancient giant finds. In fact, truth be told, there are probably many more giants in the ground now than have been found, but the most untapped region is the west because in the time since the Bronze Age, the lakes and waterways have dried out. Lake Lohontan (Lovelock Cave area in Nevada - below map) was at its peak 12,700 years ago but largely dried out around 7000 BC. That would make the giant red-haired finds and the lake culture people to have been on the far end of what was referred to as the "bronze age" though likely the desirability of bronze came from the giants mining copper and utilizing it and then discovering the smelting process and it catching on around other giant cultures around the world and becoming a sought after tool. (Incidentally, that Humboldt Sink in the middle of the map above was the area of the most ancient giant finds. Pyramid Lake is the last remnant today of the giant lake.)

Seafaring, copper-mining ancient giants could take copper back and forth (notice the map at the top of this post).  Many copper locations were near huge bodies of water, making world trade of copper an easier prospect. We're talking about a culture that did global trading long before ever thought possible!

People around the world noted to be "natives" have legends of the giants and being alongside them. They were an accepted part of their history and showed up in many of their stories including ones of rising up against them.

These supposed "leaps in man's technology" all at once were not attributed to man as we know him (of Mitochondrial Eve), but of the first man out Africa - the giant ones.  Without their vast brain power and almost 200,000 years ahead of us in the trek through the world and developing technology, we would not be where we are today. We simply picked up on what they had been using way ahead of us. It's long past time that we recognize these people and give them the place in history they deserve as the first explorers, first inventors, and first civilizations of the world.

This does not belittle the fact we, homo sapiens, caught on and took technology to where it is today, but we should give proper credit to the originators of the "leap in technology" that helped us grow up a lot faster than our evolutionary years should have proposed.

And, to the fact that we survived and thrived in comparison to our predecessors.