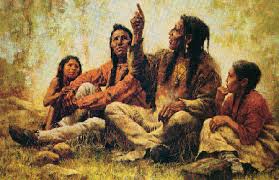 Let us begin this voyage into the subject matter of Sasquatch and the Native legends by talking about the ancient giants whose remains have been found around the world.


Why would the government want to put the ancient giants underground and forgotten by not recognizing them, perhaps working to hide the evidence?

If you consider America in the latter half of the 1800s and early 1900s, Christian agenda was important to uphold and any evidence to disprove the Bible would be shunned. Not only that, but it would validate Native American legends that incorporate their encounters with the giants, making their beliefs justifiable and valid, not "heathen nonsense." Then, there's the whole popular Darwin Theory backing of the time and "science" as the new force driving politics and culture. How would they possibly explain a giant civilization of other beings when man was supposed to have superbly and singularly evolved from primates as the soul "intelligent" winner?

The concept that these beings interacted with Natives is probably beyond the thinking of the times. If even one Native legend has truth (Paiutes and red-haired giants, for example), then the Natives' faith was based on truth and their record-keeping was meticulous. That would make them on "even ground" intellectually with the Europeans arriving in elaborate boats with guns and books and other "modern devices." They were not a superstitious heathen bunch as was assumed by the arrogant newcomers, but a cautious people who lived alongside beings with exceptional skills and ruthless carnivorous tendencies. The Native People had this isolated relationship with the Tall Ones and the newcomers had not learned from the past as their people had. These Native People were keenly more aware of the country and its history.

The Paiute Tribe - a classic example of a humble tribe giving detailed legends of their origins and their trials and victories in which the stories prove over time their accuracy in history keeping.

Numa Titucca - "Man Eaters" were described in their legends. A tribe of unknown origins that was very tall, with red hair all over their bodies, and carnivorous cannibals. This horrifying tribe of tall cannibals came from somewhere in the California territory, as best as could be assumed, and came into the lands of the Paiute around Lake Lohantan. The Paiutes fought them off, finally trapping the last Man Eaters (who had constructed a reed boat and were living on the lake) inside of a cave where they burned the last of them and won the war with these outsiders.

Who were these red-haired giants? They were a people who likely fled a Mt. Shasta eruption. In the day, Pyramid Lake and Lake Lohantan were joined. The journey would likely be water, these giants all over the world being water-oriented from their first launch into the South Pacific and onward to Peru's coast.

In the early 1900s, guano farmers found these giants' remains inside Lovelock Cave, verifying the legends so meticulously carried by the proud Paiute people.

In the journal, Noticias de Nutka: An Account of Nutka Sound in 1792, there was reference to what locals reported by Natives of the Pacific Coast of America. Reportedly, the creature encountered by the Natives was referred to as Matlog. They were reported to be massively large, covered in black bristly hair, strong fangs, upright, and creating a loud screech.

(Lenni-Lenape legend) The Mississippi River Valley was lush and fertile, and was looked upon by the Lenni-Lenape as a good place to establish a permanent settlement. They followed it downstream to its junction with the Missouri River where they came face to face with the mighty *Talega; The Moundbuilders. Highly sophisticated and intellectual, the center of Talega land was the walled city of Cahokia located near our present East St. Louis. Cahokia was the commercial, political and religious center of the Moundbuilder culture, and has been described as “a cross between New York, Washington, D.C. and the Vatican”.

A message was sent to the Talega leader asking permission for the Lenni-Lenape to settle in their area as friends and allies. Permission for a settlement was denied, but safe passage across their territory was granted. A peaceful crossing was begun, but trouble soon reared its head. Over the generations, the numbers of the Lenni-Lenape had swelled greatly. When the Talega leader saw the thousands of people preparing to cross his land, he panicked. Fearing an invasion, the Talega warriors were ordered to attack, killing those who had already crossed the river. Enraged by this deception, the Lenni-Lenape swore to “Conquer or die”, and called upon the Iroquois (with whom they had established a strong bond) for help. Help was granted.

What followed has been described as one of the largest wars ever fought on the ancient continent. One stronghold, called Fort Ancient, had pallisaded walls 13 feet high and 5 miles long, and could shelter 10,000 people. The war raged over the lifetimes of 4 Lenni-Lenape chiefs before they were finally victorious, driving the Talegas south forever (down the Mississippi by accounts). The Natchez are the descendants of the final remnants of the defeated Talega.

Interestingly, one of the most active regions Bigfoot regions of America is down the Mississippi. 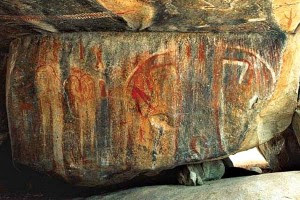 The Yokuts call him "Hairy Man," a being standing upright, arms out wide, long hair, and large haunting eyes. The hairy man painting is 8-1/2 feet tall.

In the book, "Myths and Legends of Washington," Lynn E. Bragg wrote about the Cascade and coastal tribes describing what sounded like ape-like beings who lived in the caves within the Cascades.

Source:  Sharp-Elbows is a malevolent humanoid monster of the Chiwere and Winnebago tribes. He resembles a human but with long bone spikes protruding from his elbows, which he uses to stab people to death. In some stories he also has a second face on the back of his head, like the Sioux Doubleface. In some stories Two-Face is a predator who eats humans, but in most he is an evil being who kills simply for the sake of killing, frequently targeting women and children.

The sad thing is that Native stories were brushed off as spiritual nonsense or cautionary tales for the young and superstition. But, the Native People revered the land and nature and reported of the places they lived upon, the crops, the seasons, and the animals they encountered quite vividly.

My hat is off to North American tribes that kept meticulous records that Europeans tried to belittle and defame. My advice is to look to Native legends. These caretakers of the Americas know it and pass it on with great reverence and responsibility. They have the only original history of our country, not the pasteurized one by the Europeans.