Giants Who Eat the Locals

A Lakota tale of "Iya the Camp Eater" describes the tribe finding a screaming baby in the wild and bringing in it to be raised by one of the tribal women. The elder, however, notices something strange and warns that they must escape, as Iya the Camp Eater is in disguise and as soon as he shifts to his tall form with spindly legs, he will eat the entire camp's occupants. This is just one of many examples of native tales of people-eating giants.

From the Seneca, we have the legend of "Skagedi and the Man Eater.  "  This legend tells of a Native Man who lived on a hill. Below the hill lived a man-eater who tried to fool him by making a pot of chestnut pudding and saying that he would protect the man from any people eaters. The man came and ate with him, even gave the man-eater advice, not realizing what he was. Skagedi begs the man-eater to stop eating people, but the man eater says it is his people's way. Eventually, the man-eater learned to stop eating people.

Giwakwas (or Kee-wakw) are the evil man-eating ice giants of southern Wabanaki legends. According to most legends, a Giwakwa was once a human being who either became possessed by an evil spirit or committed a terrible crime (especially cannibalism or withholding food from a starving person), causing his heart to turn to ice. In some Abenaki legends, the stone giants (Asinikiwakw) were not transformed humans but primordial man-eating monsters, defeated by the culture hero Gluskabe.

The Zuni Nation has a legend of "Atahsaia, the Cannibal Demon."  This man-eating giant lived inside a cave on a mesa.  His body was as big as the biggest elk. His breast was shaggy with hair as stiff as porcupine quills. His legs and arms were long and brawny all covered with scales of speckled black and white. His hair was coarse and snarly as a buffalo's mane. His eyes were big and glaring, popping out of his head like skinned onions.  His mouth stretched from one cheek to another and filled with yellowed crooked fangs. His lips were red and puffy as peppers and his face as wrinkled and rough as burnt buckskin. He devoured men and women and children as sweetbread. His fingernails were long like the claws on a bear. He had an oak bow and arrows, and a flint knife as broad as man's thigh and twice as long. 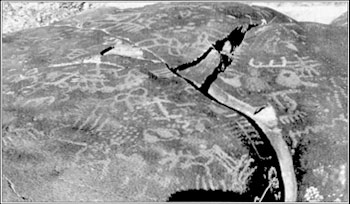 Source:  The Bruneau River was named after a French fur-trader in the mid-17th Century. Near its headwaters stretches the legendary land of the giants who terrorized Shoshone forefathers, frightening them from their ancestral hunting grounds.

These were found in the Pine Nut Mountains, along the Jarbridge River. Here, the [sic] huge Tsawhawbitts, evil spirits in superhuman form, ravaged the Indians. Their old stories tell that these giants possessed an appetite for human flesh, and could cross creeks with a single step, or scale mountains in few strides. They chased and captured people, putting hapless victims in huge baskets, which they carried to the mountaintop for cannibal feasts.

Southeastern US Native Tribes have many legends of the Big Man-Eater. They are described different ways by the tribes, but all have the same running theme, that this huge beastly being on two legs was eating their people.

The Iroquois speak of the stone coats: Stone Coat is the name of a mythological rock giant of the Iroquois-speaking tribes. In some tribal traditions there is only one Stone Coat, while in others, there is a whole race of them. Stone Coats are descibed as being about twice as tall as humans, with their bodies covered in rock-hard scales that repel all normal weapons. They are associated with winter and ice, and they hunt and eat humans. In some legends Stonecoats were once human, and became cannibal monsters as a curse punishing them for evil deeds, like the Windigos of Chippewa mythology. In other legends Stonecoats were never human, but were a tribe of primordial man-eating monsters created by Flint.

I am only sharing some of the types of giants mentioned in America. These legends go around the world and are included in religious texts as well as myths and legends. When similar figures and scenarios go across lands around the globe for thousands of years, one has to wonder what great influence they had to have "running themes."

What can we assume from these legends? That they are the musings of people who faced very real deadly conflicts daily in the wilds? Then, why are the stories not about mountain lions and bear? They are rather specific in their desire to reason with a large people who liked to eat their kind.

Here's the interesting thing about carnivorous beings - they are built for and preoccupied by eating flesh and aggression. They do not forage for nuts or seeds, roots or berries. Their very lives depend, not on nibbling on grass hillsides like deer or hunting and gathering like Homo sapiens, but being finely-honed predators, like mountain lions and tigers in the wild. The very logic, focus and prime directive of a carnivorous form of man would be on eating anything that is flesh, including the smaller native people around them.

It would appear from these legends that at some point in time, Native People around the world had to deal with a race of very powerful predators. Who they were and where they went is up for discussion (future posts no doubt).