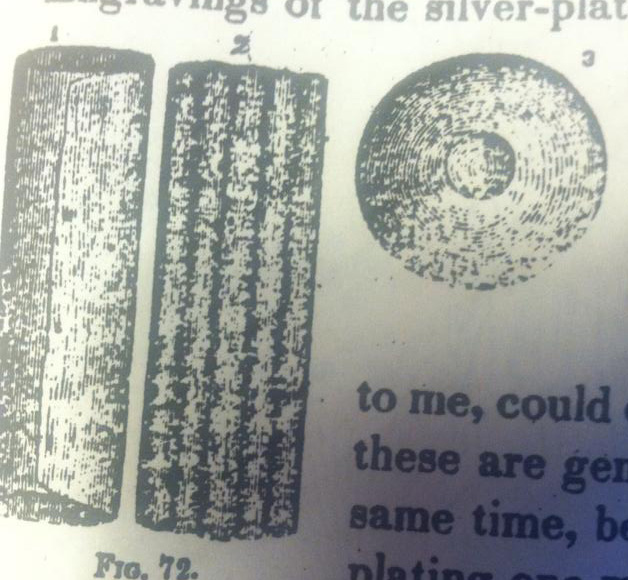 From the book "Aboriginal Monuments of the State of New York" by EG Squier.

Page 188:  Engravings of the silver-plated discs and also of the embossed silver plate supposed by Dr. Hildreth to have been a sword ornament, are herewith presented. These articles hae been critically examined and it is beyond doubt that the copper "bosses" are absolutely plated, not simply overlaid, with silver. Between the copper and the silver exists a connection, such as, it seems to me, could only be produced by heat; and if it is admitted that these are genuine remains of the mound-builders, it must, as the same time, be admitted that they possessed the difficult art of plating one metal upon another. There is, but one alternative, that they had occasional or constant intercourse with a people advanced in the arts, from whom these articles were obtained.

Studying ancient objects from 2000 years ago, researchers found..."They discovered that gold- and silversmiths 2,000 years ago developed a variety of techniques, including using mercury like a glue to apply thin films of metals to statues and other objects. Sometimes, the technology was used to apply real gold and silver. It also was used fraudulently, to make cheap metal statues that look like solid gold or silver. The scientists say that their findings confirm “the high level of competence reached by the artists and craftsmen of these ancient periods who produced objects of an artistic quality that could not be bettered in ancient times and has not yet been reached in modern ones.”

Source:  The oldest archaeological evidence of copper mining and working was the discovery of a copper pendant in northern Iraq from 8,700 BC. The earliest substantiated and dated evidence of metalworking in North America was the processing of copper in Wisconsin, near Lake Michigan. Copper was hammered until brittle then heated so it could be worked some more. This technology is dated to about 4000-5000 BC. The oldest gold artifacts in the world come from the Bulgarian Varna Necropolis and date from 4450 BC.

The Bronze age was based on the making of bronze, the main ingredient being copper - Europe had a “Bronze Age”, archaeologists have accepted that much more copper was used than what they have been able to attribute to European mines. So where did an extremely large part of the copper come from? The answer, as bizarre as it may sound, could be America.

In the State of Michigan, the largest mine was on Isle Royale, an island in Lake Superior, near the Canadian border. Here, there are thousands of prehistoric copper pits, dug thousands of years ago by ancient peoples unknown. The Minong Belt on Isle Royale has a distance of one and three quarter miles in length and is nearly four hundred feet wide. The copper pits range ten tot thirty feet deep with connecting tunnels; one archaeologist estimated that their digging would take the equivalent of 10,000 men working for 1000 years.

The Menomonie Indians of North Wisconsin possess a legend that speaks about the ancient mines. They described the mines as being worked by “light skinned men”, who were able to identify the mines by throwing magical stones on the ground, which made the ores that contained copper ring like a bell. This practice closely resembles a similar practice that was used in Europe during the Bronze Age. Bronze with a high concentration of tin indeed resonates when a stone is thrown against it. The legend might have confused the start of the process with the result of the process. Even so, S.A. Barnett, the first archaeologist who studied Aztalan, a site near the mines, believed that the miners originated from Europe. His conclusion was largely based on the type of tools that had been used, tools which were not used by the local people.

In our modern day attempts to recreate some of the sophisticated ancient metal working, we seem to have lost a certain knowledge these originators had. Sure, we eventually learned to mine and make metals from this original race, but we did not know some of their more amazing techniques. We were learning how to dance by watching someone dance on a stage and then went home to try some of the things we recalled from the show.