Amazing Earth Evidence of Ancient Giants Around the World!


Repeatedly, there are association with volcanic areas and ancient giants. Was there something to this? Perhaps they preferred the minerals or stones or the rich soils or cave systems.


One thing that is a running theme in ancient findings is that the giants often hunkered down in caves that were on mountain tops above water lines where there were ancient lakes that are today just dry basins. Lovelock Cave is such an example, as is the Grand Canyon Find, Death Valley, and more. 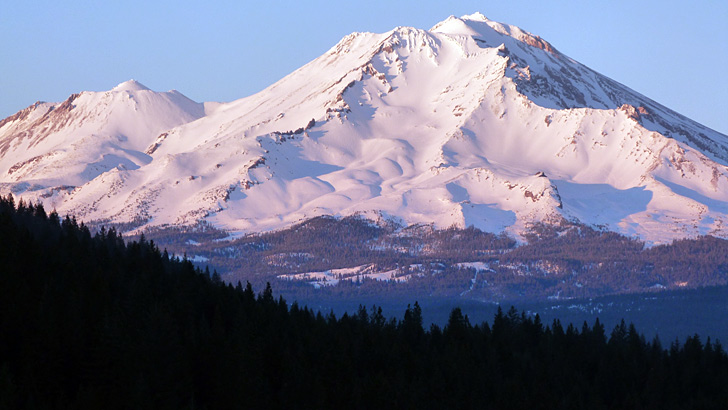 Mt. Shasta in California is a volcano that had human habitation estimated as early as 7000 BC.  The volcano, over many thousands of years has erupted many times, creating more and more lava surface and many cones. During the last 10,000 years Mount Shasta has erupted an average of every 800 years but in the past 4,500 years the volcano has erupted an average of every 600 years. The last significant eruption on Mount Shasta may have occurred about two centuries ago.

Source: The lore of some of the Klamath Tribes in the area held that Mount Shasta is inhabited by the Spirit of the Above-World, Skell, who descended from heaven to the mountain's summit at the request of a Klamath chief. Skell fought with Spirit of the Below-World, Llao, who resided at Mount Mazama by throwing hot rocks and lava, probably representing the volcanic eruptions at both mountains.

Paiute tale told by an elder -

(When asked about the ancients who flew ships)


"’We, the Paiute Nation, have known of these ships for untold generations. We also believe that we know something of the people who fly them. They are called The Hav-musuvs.’

Legend of the Hopi people -
One of the most intriguing Hopi legends involves the Ant People, who were crucial to the survival of the Hopi—not just once but twice. The so-called “First World” (or world-age) was apparently destroyed by fire—possibly some sort of volcanism, asteroid strike, or coronal mass ejection from the sun. The Second World was destroyed by ice—Ice Age glaciers or a pole shift. During these two global cataclysms, the virtuous members of the Hopi tribe were guided by an odd-shaped cloud during the day and a moving star at night that led them to the sky god named Sotuknang, who finally took them to the Ant People—in Hopi, Anu Sinom. The Ant People then escorted the Hopi into subterranean caves where they found refuge and sustenance. In this legend the Ant People are portrayed as generous and industrious, giving the Hopi food when supplies ran short and teaching them the merits of food storage. In fact, another legend says that the reason why the ants have such thin waists today is because they once deprived themselves of provisions in order to feed the Hopi. 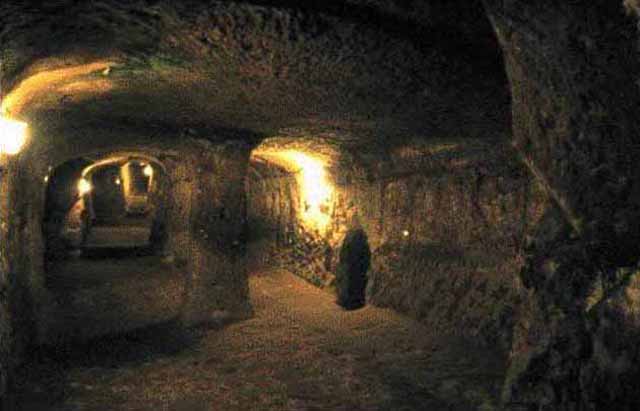 This ancient underground city in Turkey has 13 floors which could easily have sheltered thousands of people. 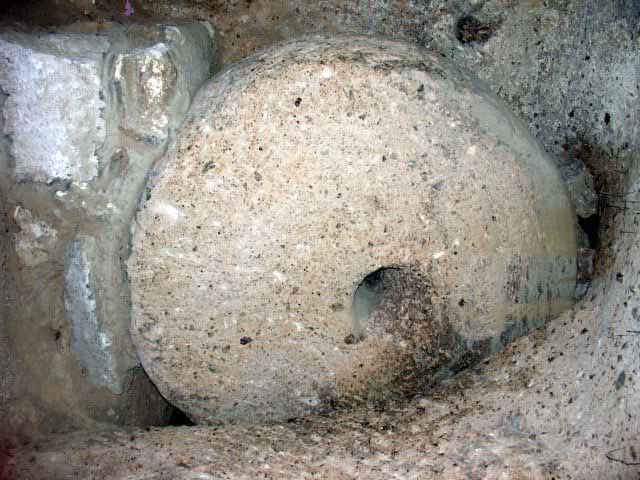 It had stone doors that moved on leverage. This is intriguing because in the book Death Valley Men, the accounts of finding an ancient giant city in caves high above Death Valley, the man from the early 1900s described stone doors that pivoted easily and wheelbarrows that weighed enormous amounts but were balanced to be easy to move. That detail could not have been stolen from the ancient site above because Derinkuyu was not found until 1963! 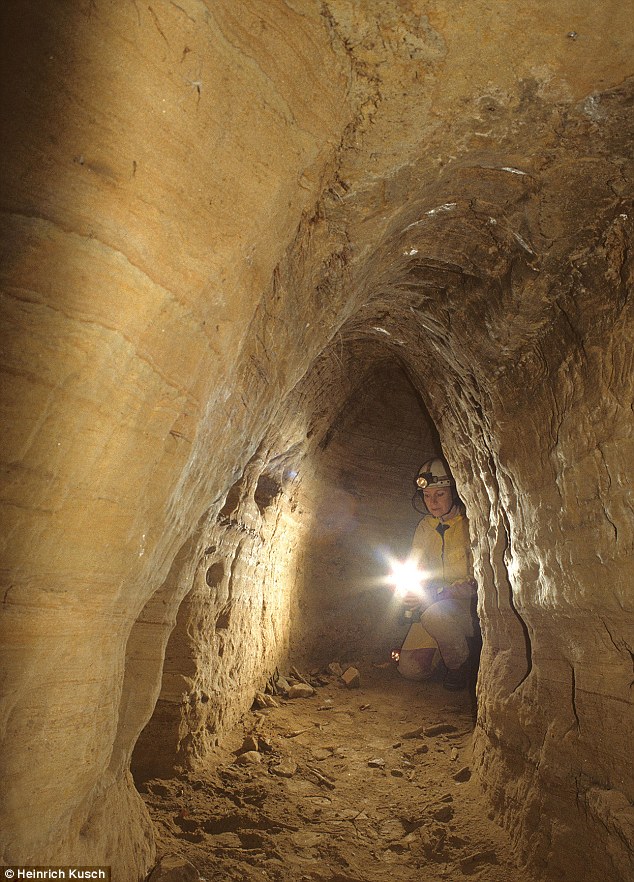 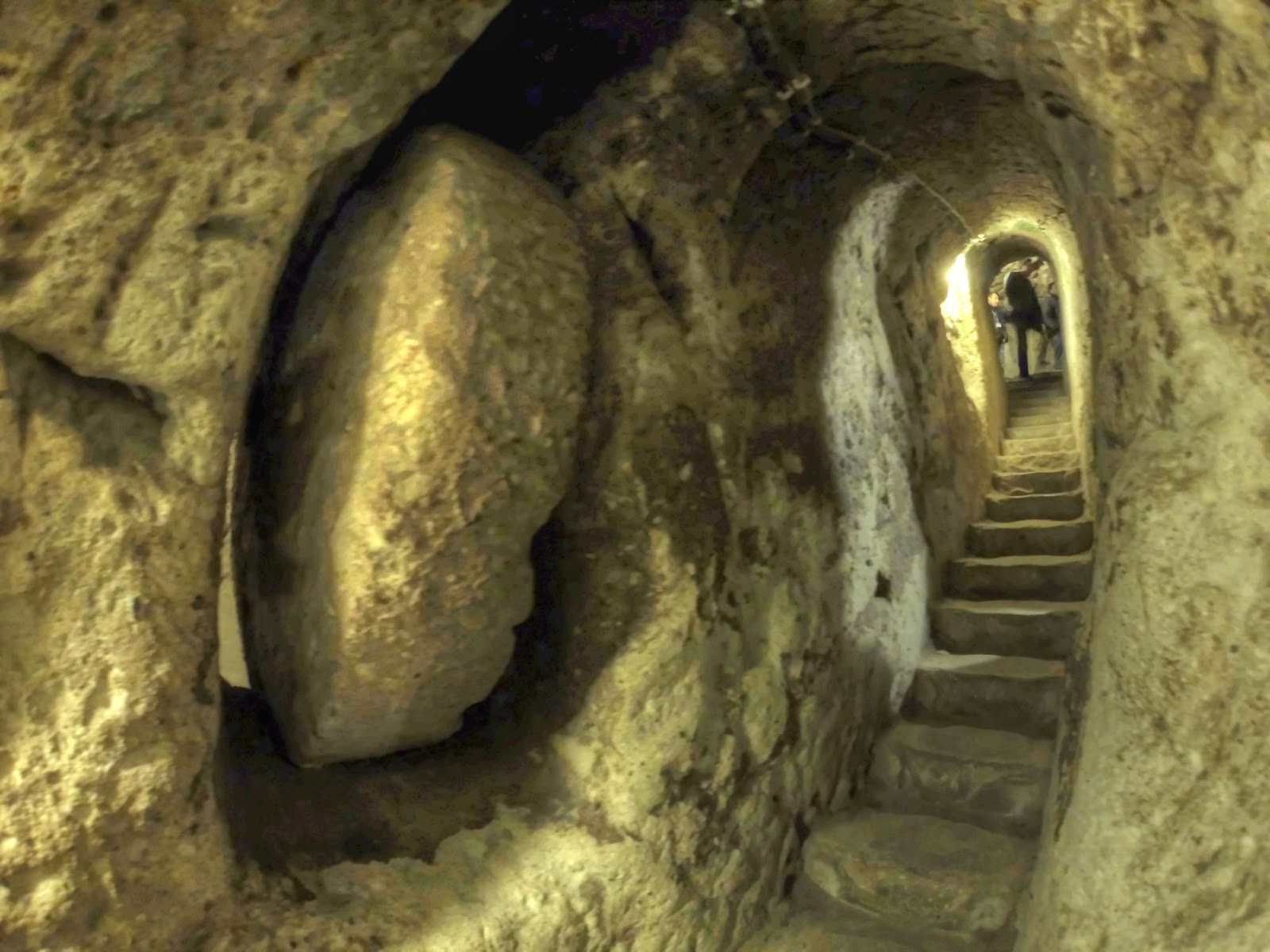 There are tunnels of ancient and curious origins throughout all of Europe and the UK. They go on for many hundreds of meters and are often whittled small enough to crawl through with some seating areas occasionally and storage areas. It would appear an ancient people throughout Europe were looking for ways to hide from someone big and bad. 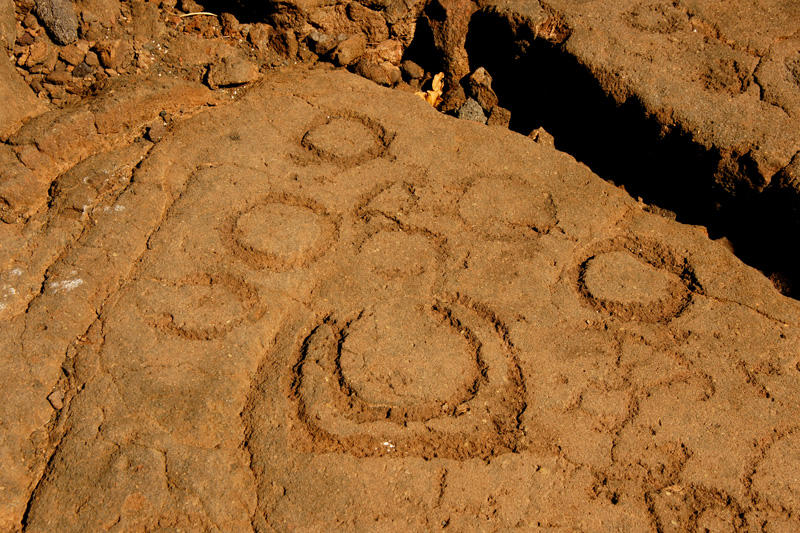 Circles: Evidence on the earth? What is it with circles? They seem to be a big part of the ancients' and their fixations from circles with crosses in the middle to spirals to circles with pie-like divisions. There are a lot of assumptions about these earth circles, but interestingly we may not look at glyphs the same way after seeing them from above because ancient petroglyphs often show these chains of circles tied together. Were they mapping their sites?

- the earth from above - 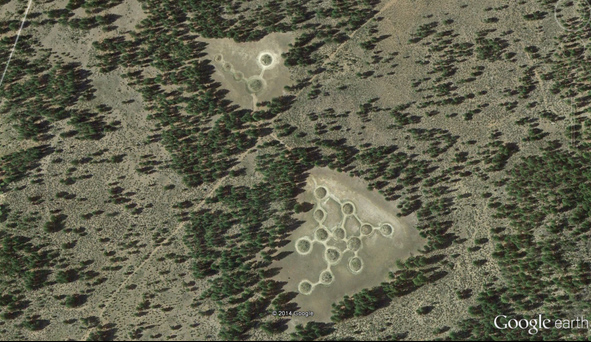 These circles with chains "mounds" are seen all over the earth and very ancient. This very nicely done article discusses these mounds with video of them. 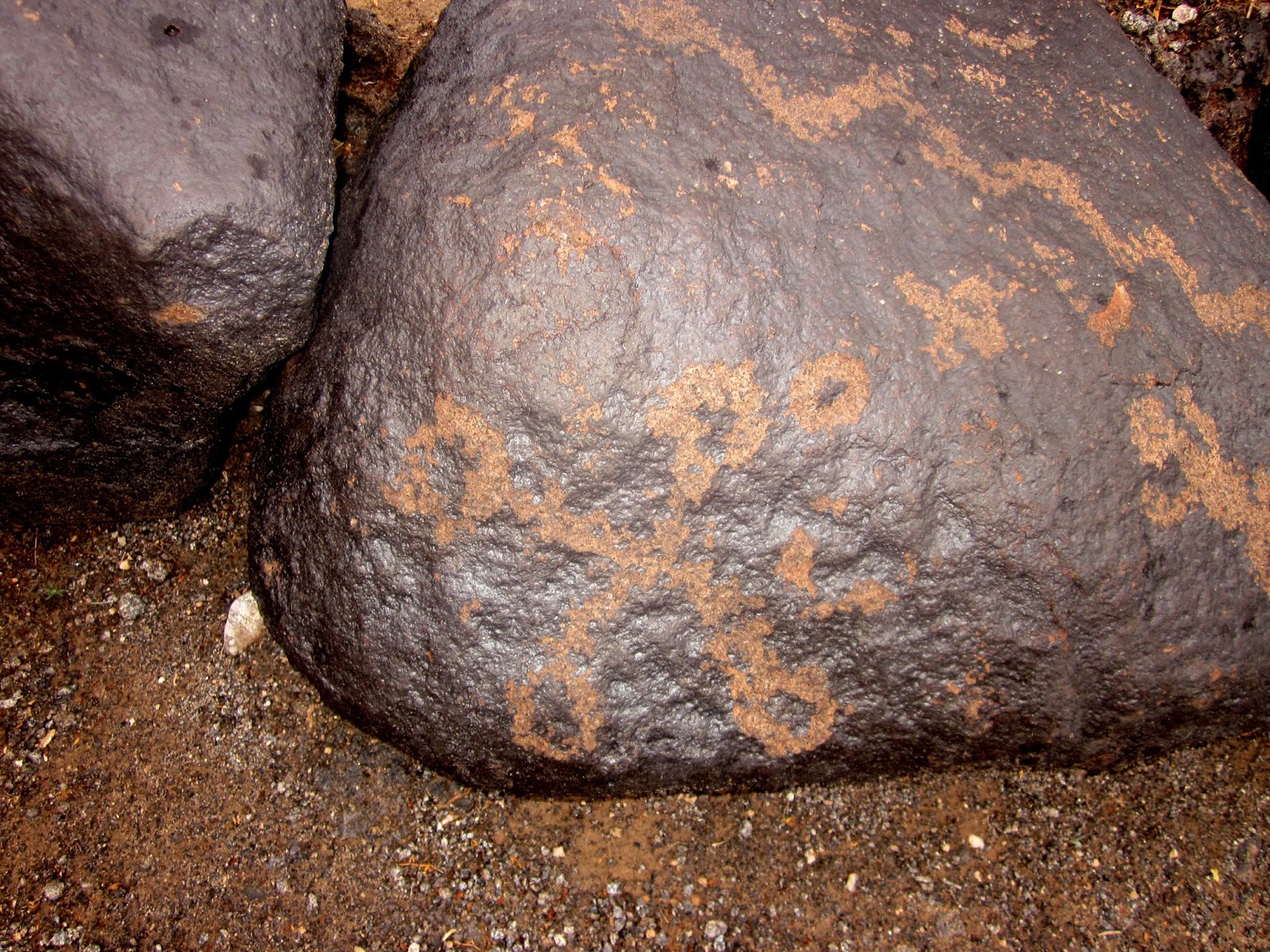 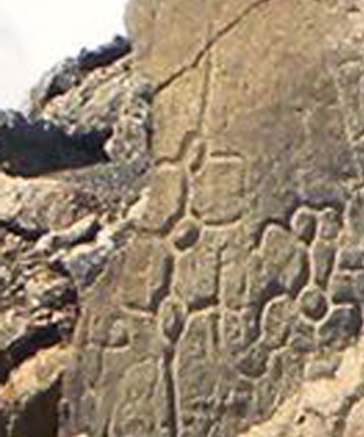 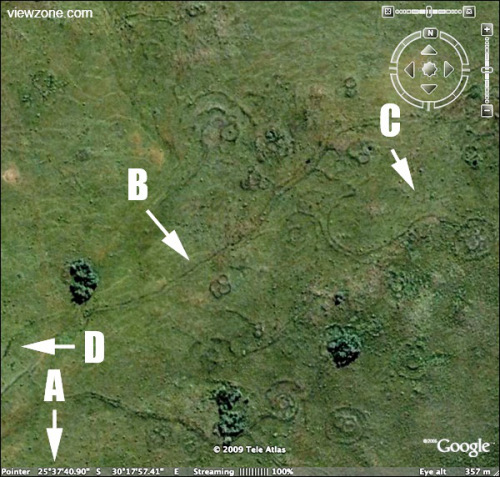 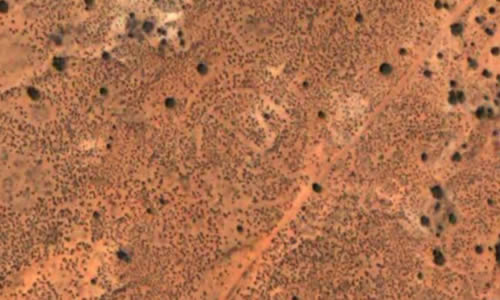 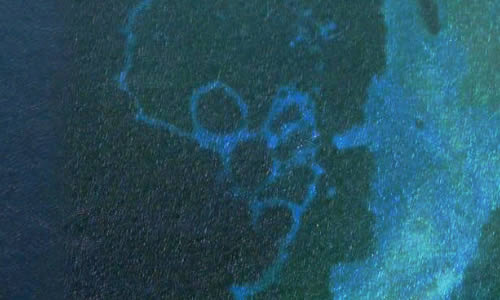 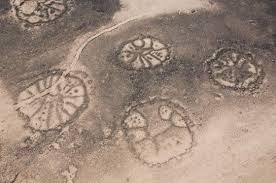 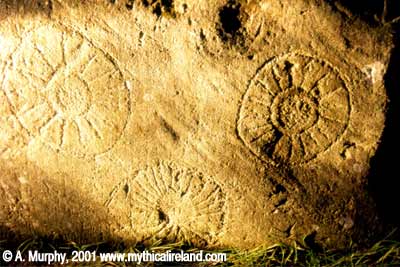 
Massive geoglyphs around the world show a strange perspective and amazing talent. Why? Who was doing these and why? 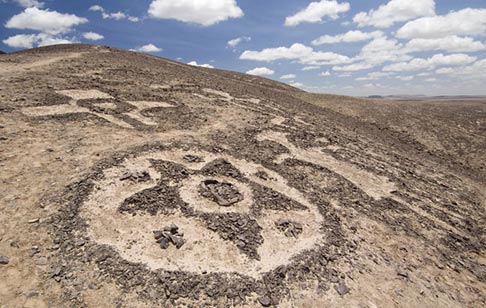 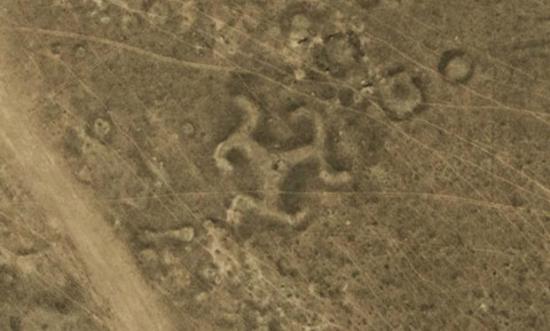 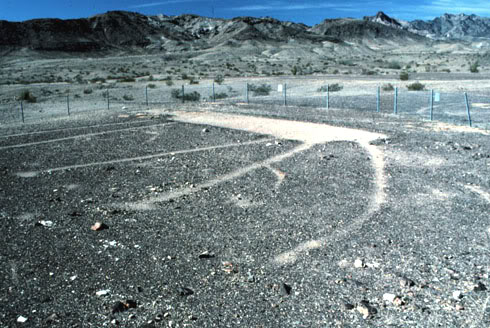 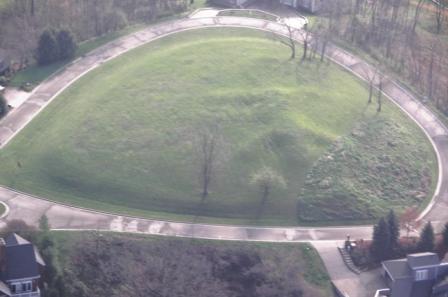 The greater question here might be - did the Homo sapiens have to make tunnels to escape the cannabalistic giants and did the Pueblo Indians of the Southwestern United States have to build in cliffsides to escape them? There is evidence of cannabilized bones in those cliff dwellings and tunnels weaving through all of Europe and the UK of ancient origin are very small to crawl into, like the tunnels built into the Pueblos by the natives. If you were trying to avoid the giants, would you burrow underground in tiny tunnels that lead to larger chambers so they couldn't get you?

There are also reports that in Death Valley and the Grand Canyon, the giants hid within the earth during a time of catastrophe and even brought all their belongings and seed samples and more as if preparing to emerge at some point and rebuild.

It appears that on rock drawings, in huge geoglyphs on the earth's surface and in the cave structures beneath, there are repeated messages of much more organization, culture, and escape routes than we ever assumed.