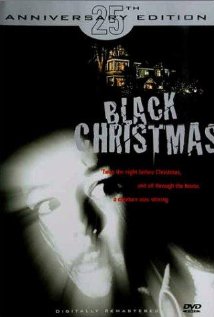 Black Christmas (1974): A sorority house is terrorized by a stranger who makes frightening phone calls and then murders the sorority sisters during Christmas break.

Silent Night, Deadly Night:  After his parents are murdered, a young tormented teenager goes on a murderous rampage dressed as Santa, due to his stay at an orphanage where he was abused by the Mother Superior.

Christmas Evil: A psycho in a Santa suit gets to decide who's been naughty and who's been nice.


Gremlins: A boy inadvertently breaks 3 important rules concerning his new pet and unleashes a horde of malevolently mischievous monsters on a small town.

Home For the Holidays:  An ailing man summons his four daughters home for Christmas and asks them to kill his new wife, whom he suspects is poisoning him.


Jack Frost:  A serial killer dies, comes back as a snowman, and wreaks havoc.

Santa's Slay:  Santa Claus is actually a demon who lost a bet with an Angel, so he becomes the giver of toys and happiness. But when the bet is off, he returns to his evil ways.

Santa Claws:  A B-horror movie actress is stalked by a deranged fan bent on claiming her for himself.

P2:  A businesswoman is pursued by a psychopath after being locked in a parking garage on Christmas Eve.


Don't Open Till Christmas:  Somebody with very little Christmas spirit is killing anyone in a Santa suit one London holiday season, and Scotland Yard has to stop him before he makes his exploits an annual tradition.


A Cadaver Christmas:  United by terrifying and bizarre circumstances, the janitor, the drunk, the bartender, the cop, his perp, and the student security guard must fight to undo the professor's work. A dark force is at work in the cadaver lab this Christmas and this unconventional band of heroes are the only hope the world has against an army of living corpses that are quickly recruiting new members. The undead have been given the gift of life and it's up to the janitor to take it back.

Bloody Christmas:  In a small town Police are in search for a child murderer. Meanwhile Rich Tague a has been 80's action movie star, is attempting to figure out the meaning of Christmas as he plays Santa on a Public Access T.V show. He fantasizes about murdering the people that do him wrong. Will he have the strength to not be on his own naughty list?


Rare Exports: A Christmas Tale: It's the eve of Christmas in northern Finland, and an 'archeological' dig has just unearthed the real Santa Claus. But this particular Santa isn't the one you want coming to town. When the local children begin mysteriously disappearing, young Pietari and his father Rauno, a reindeer hunter by trade, capture the mythological being and attempt to sell Santa to the misguided leader of the multinational corporation sponsoring the dig. Santa's elves, however, will stop at nothing to free their fearless leader from captivity. What ensues is a wildly humorous nightmare a fantastically bizarre polemic on modern day morality. Rare Exports: A Christmas Tale is a re-imagining of the most classic of all childhood fantasies, and is a darkly comic gem soon to be required perennial holiday viewing.


If you want to go thriller/suspense, go for this one -

Die Hard:  Bruce Willis stars in this adrenalin-high classic action movie in which a cop from New York visits his estranged wife in LA during her company business party in a high rise downtown. He ends up having to be the hero when the party is taken hostage.