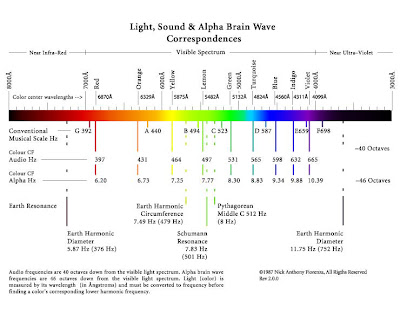 Synesthesia - a confusion of senses, so that one might see numbers as colors and sounds as smells. In the spectrum of light and colors, there are correlations with frequencies. The orange-red spectrum would be perhaps 410 Hertz.

In relation to Sasquatch and supposed use of infrasound, it had me wondering a bit -

I was just bopping around doing a little studying on color and its equivalency in frequency in Hertz. I was looking at it in relation to alpha brain waves - when we are receptive to communication, the orange-red lights when I saw the alien greys, and what frequency they might need to obtain that would create that color of light.

Alpha waves in our brains are neural oscillations in the frequency range of 7.5–12.5 Hz This is the state of mind we are in as we fall asleep and wake up - incidentally the time we are visited by the dead and by aliens. Not only that, but the infrasound might put us into a kind of "sleepwalking" state or what some might call "mesmerism." Can sasquatch mesmerize and make us forget encounters? If he can obtain infrasound, it's feasible and since a human can get infrasound (one lucky man with long vocal chords can), then voila!

I began to notice that upon times of astral projection, my body oscillates like a million butterflies within as I leave my body and as I reenter it. The closest I can compare it to is Star Trek's transport device.

Why do I include Sasquatch in talk of aliens? I believe Sasquatch to be the descendants of the ancient giants and and an earlier man form upon the earth before Homo sapiens moved on from the continent of Africa and moved on to other territories where giants were already well settled and way ahead of the game.

It is entirely possible we are speaking of many types of people upon this earth way prior to use who learned how to move on to the next realm. Our only vestiges that tie us together are our brain waves as we go into sleep state. It is there that perhaps we tap the other realms?

Of course, expect me to continue to follow this line of curiosity in the future.