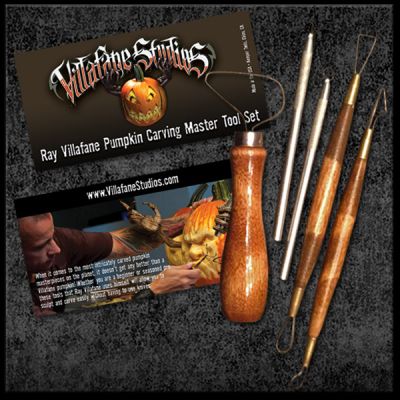 After years of seeing folks doing those awesome sculptures on pumpkins, I thought it was time to set down the super cheap and awful saw kit stores sell and get a real kit and see what it inspires.

I began by ordering the Villafane tool kit online. Since he's really the absolute hands-down world's best pumpkin carver, I figured his kit has to be up to his standards of holding up to any scenario. And, I was very very pleased! These tools will be heirlooms I will pass down. Seriously, this is for serious Halloweeners.

Just so you know, I've always been a miserable pumpkin carver and gift wrapper. These are two skills I never mastered. My pumpkins have been very rough and basic and sawed mementos of attempts at fear only inciting laughter.

I began by peeling away the surface with the huge loop in the kit. 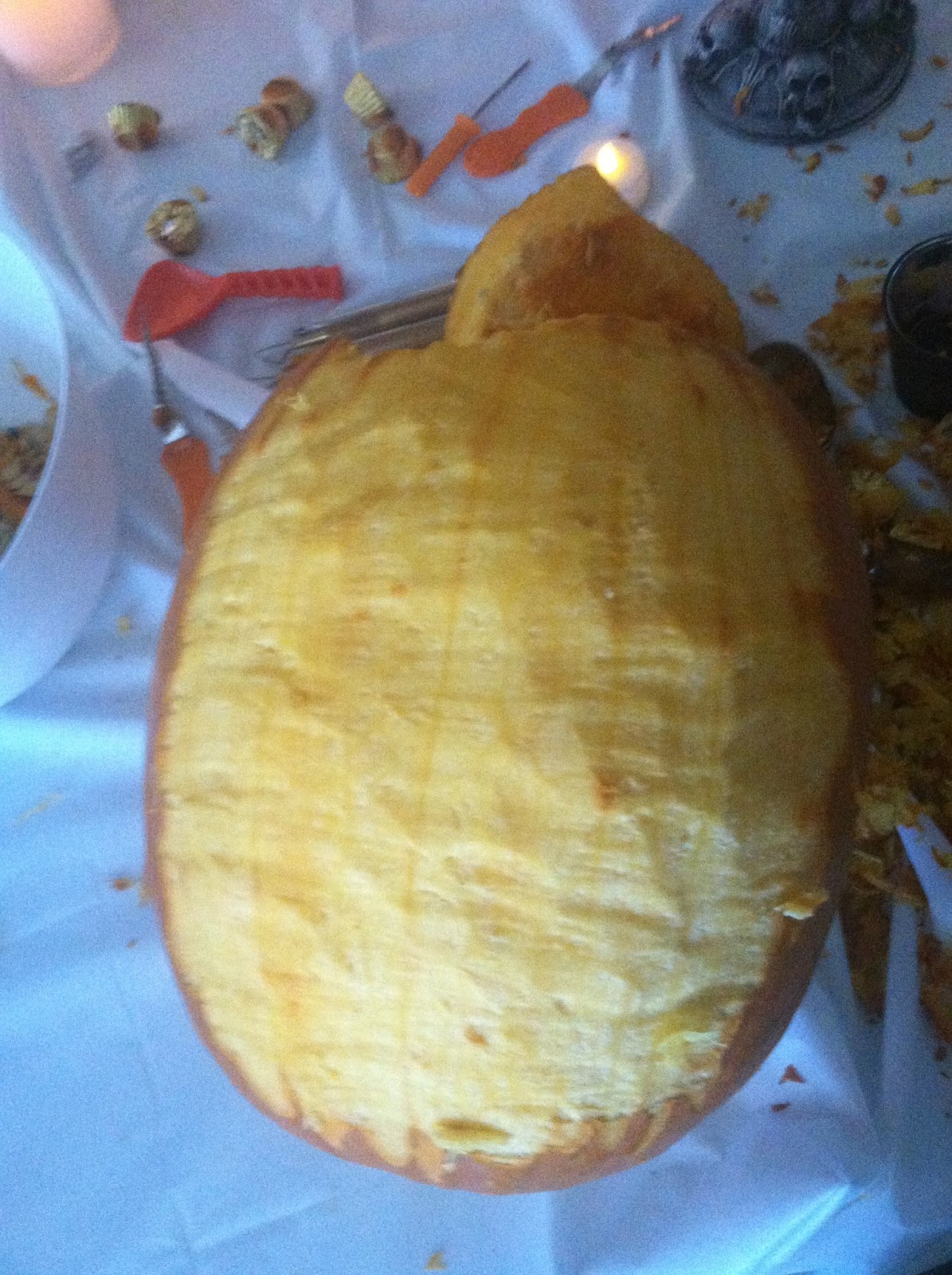 I decided I'd do a zombie that could eat a doll's head. 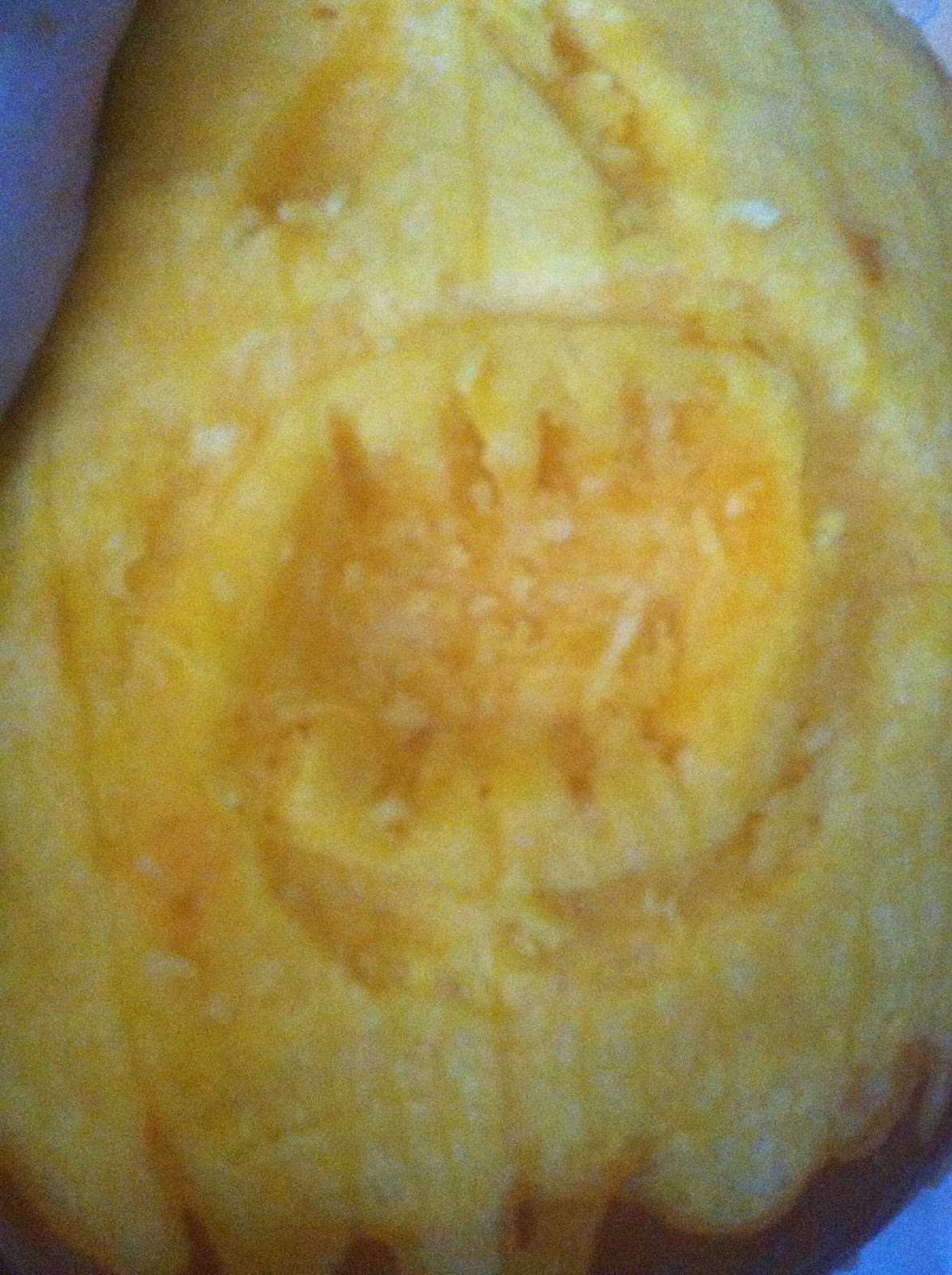 I started with his mouth, wide open, scooping in as deeply as I dared without going through the flesh fully then used the tiny squared loop to help carve the sharp edges of teeth. The kit included a large loop, a large squared loop, a small loop and a small squared loop that all make it possible to smooth away flesh in a graduated way with the rounded loop and use the squared one to make exacting cuts. 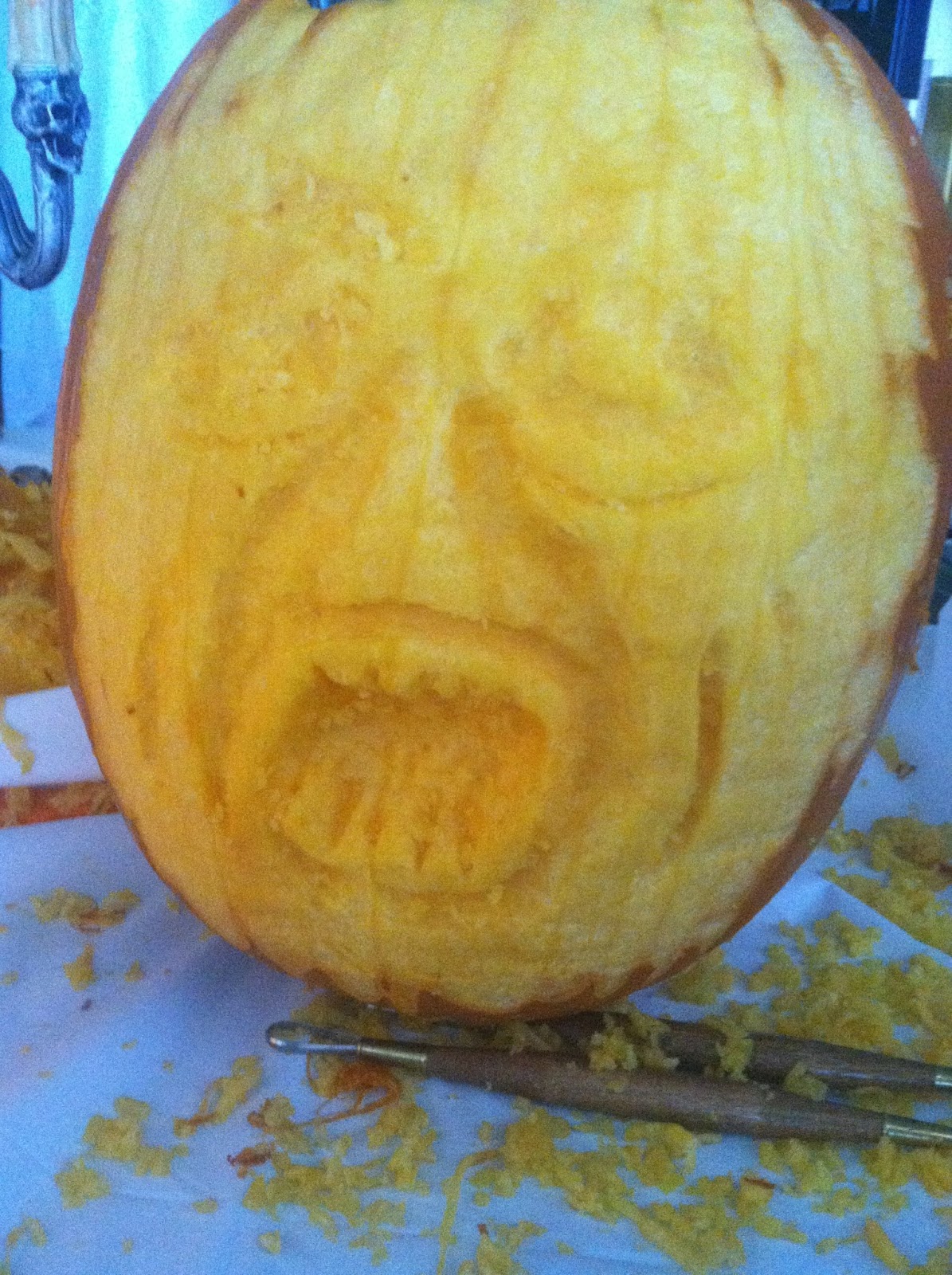 I had to remember to keep the tip of the nose as the tallest thing on the face and thought about the eye sockets and brow ridge and wrinkling on the agonized face. The flesh was soft and easy to scrape away and I found myself getting lost in the fun of detail work. 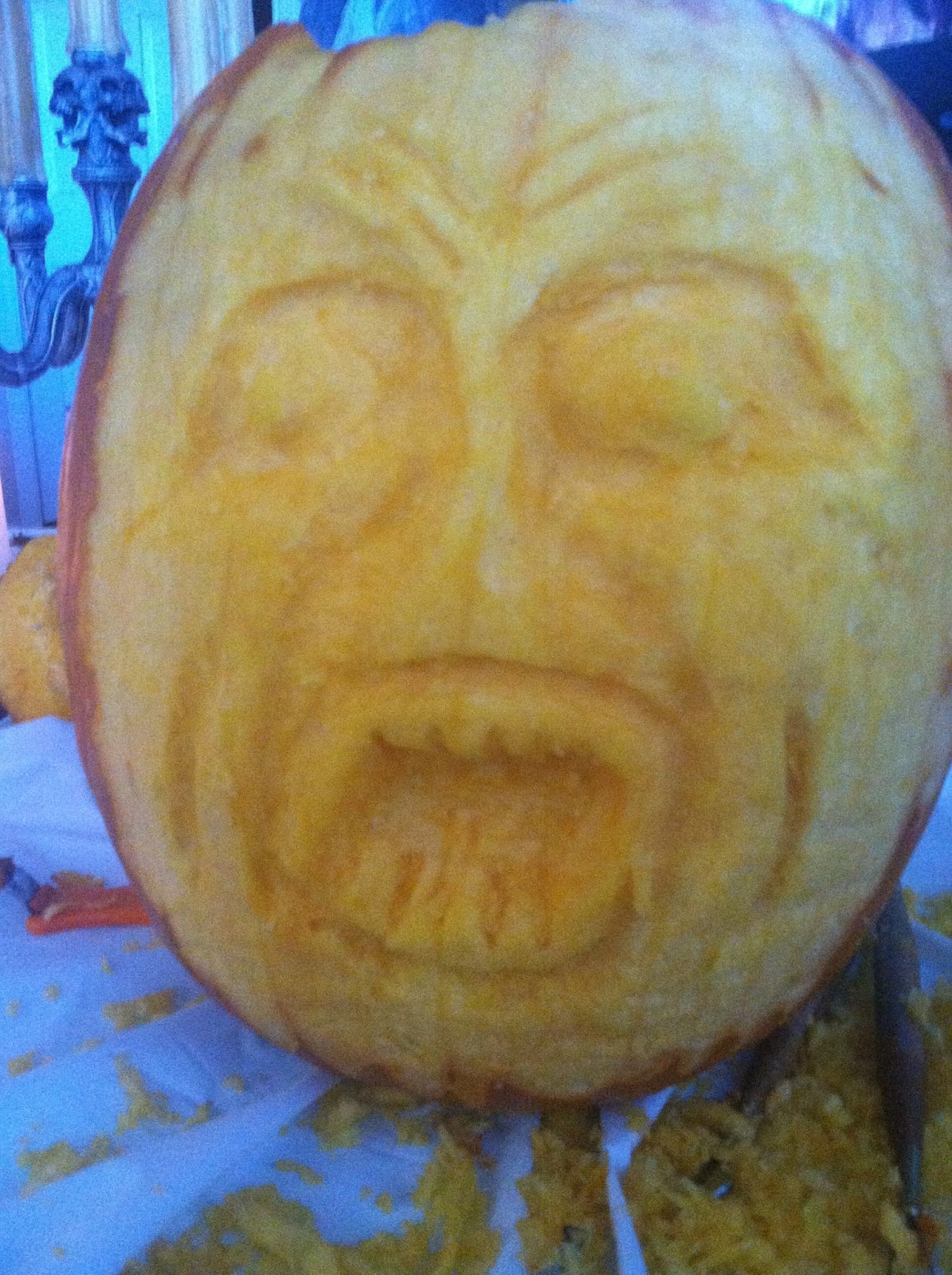 Now, I could start to see where the features were and it was just a matter of bringing them out, paring away. Before I knew it, the face was taking form and I was almost ready to light up a candle inside and see what I had produced, but first, I took the doll's head and put a corn cob stabber inside it to stab it into the mouth of the pumpkin's mouth so it would stay. 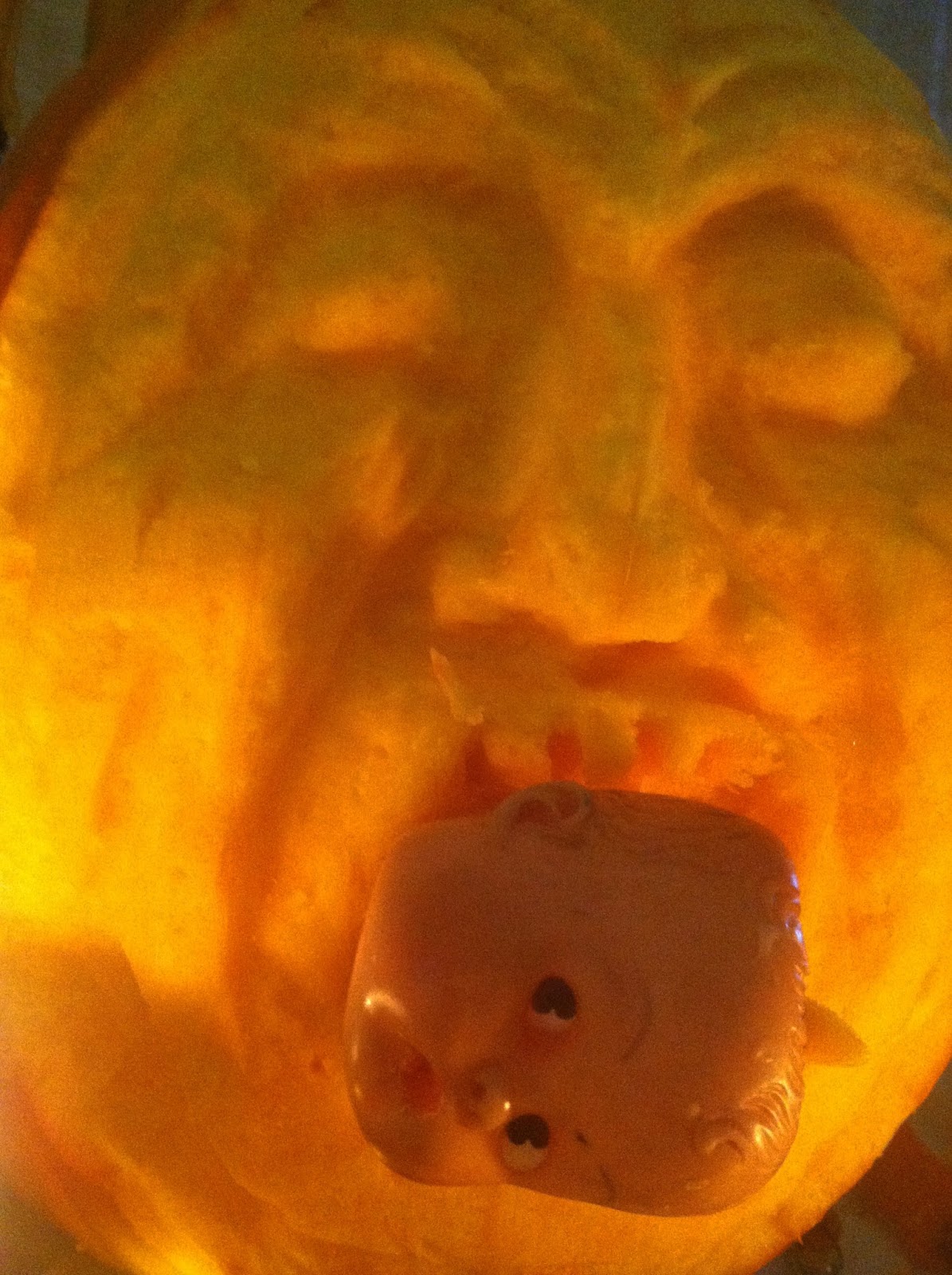 Thank you Villafane Studios for making a really great product that made me feel like an artist on Halloween and instead of sawing and groaning, I was able to do something I didn't know I had a skill to do!


**Tomorrow is another installment of "The Urban Sasquatch Journal"**