I arrived at the parking lot around 1 p.m. The temperature was 81 and cloudy. At 1:06 p.m., I started walking the area. I looked closely at the set-ups and the only thing that moved was a Frisbee or disc on a wood block. It was moved 3 to 4 inches from the center of the block. 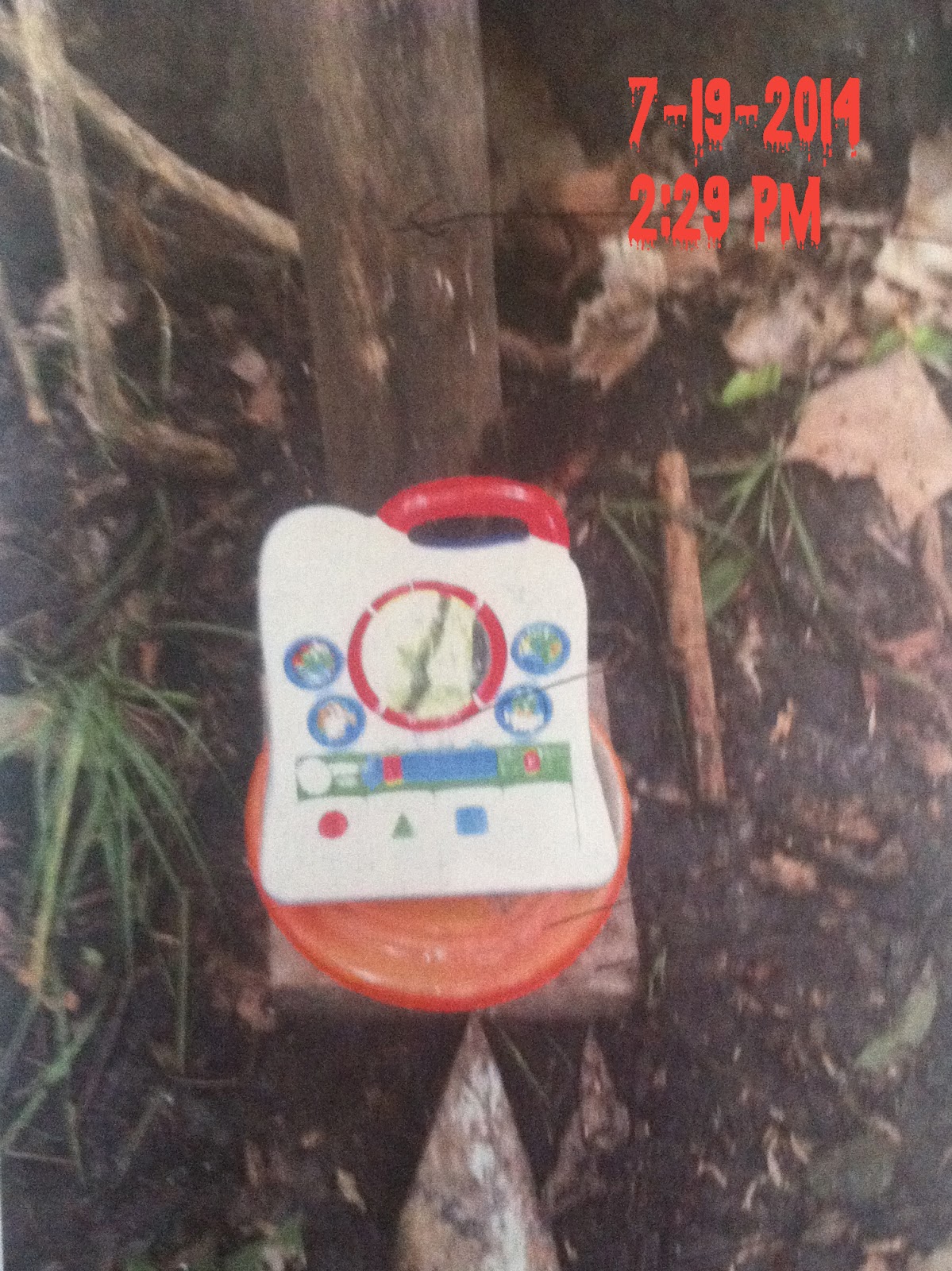 I continued to explore the area and found 9 more balls. These were in the junk/trash pockets scattered all over the immediate area. The junk/trash pockets seem to be oblong or circular in pattern. I have made additions to setups which I have photographed. I also found many types of plastic covers. 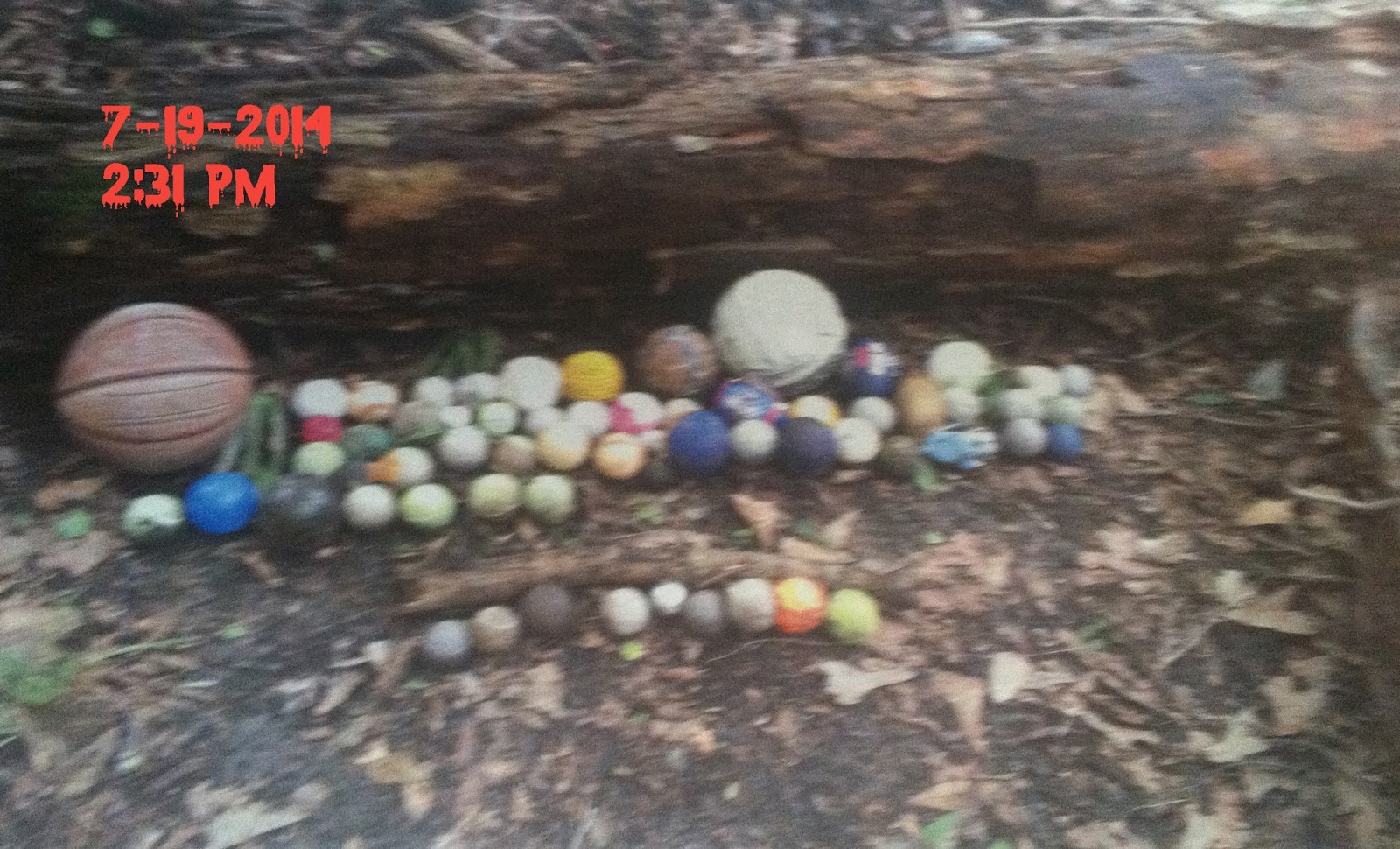 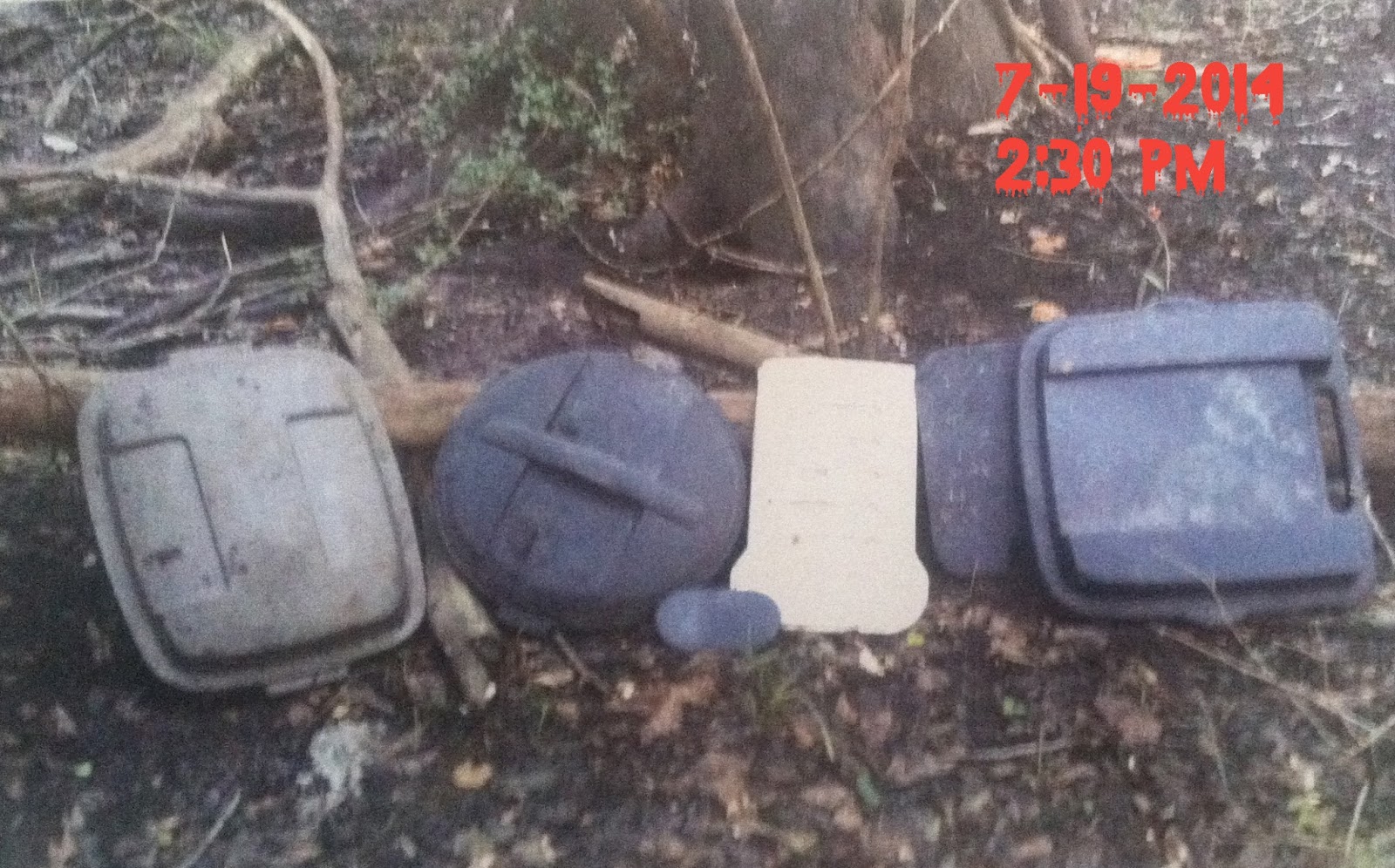 I also explored the west side of the ditch-creek area to see if there were pockets of trash/junk on the east side. I did not locate any large spots. I did find several small pockets maybe 10 feet square.  This is the area closer to the roadway. It looks very clean in comparison to what I'm used to seeing on the east side of the ditch in my set-up areas. I hiked back to the bike-hike trail through the woods west of the ditch. I made it back to my vehicle by 3:26 p.m.

I arrived at the parking lot area and began walking to the location at 7:25 a.m. It was a beautiful clear morning. When I cut south past the bike-hike trail bridge, I noticed several deer in the ditch west area feeding. After seeing me approach the area, they both crossed to the east side and moved through the tree line into the woods. 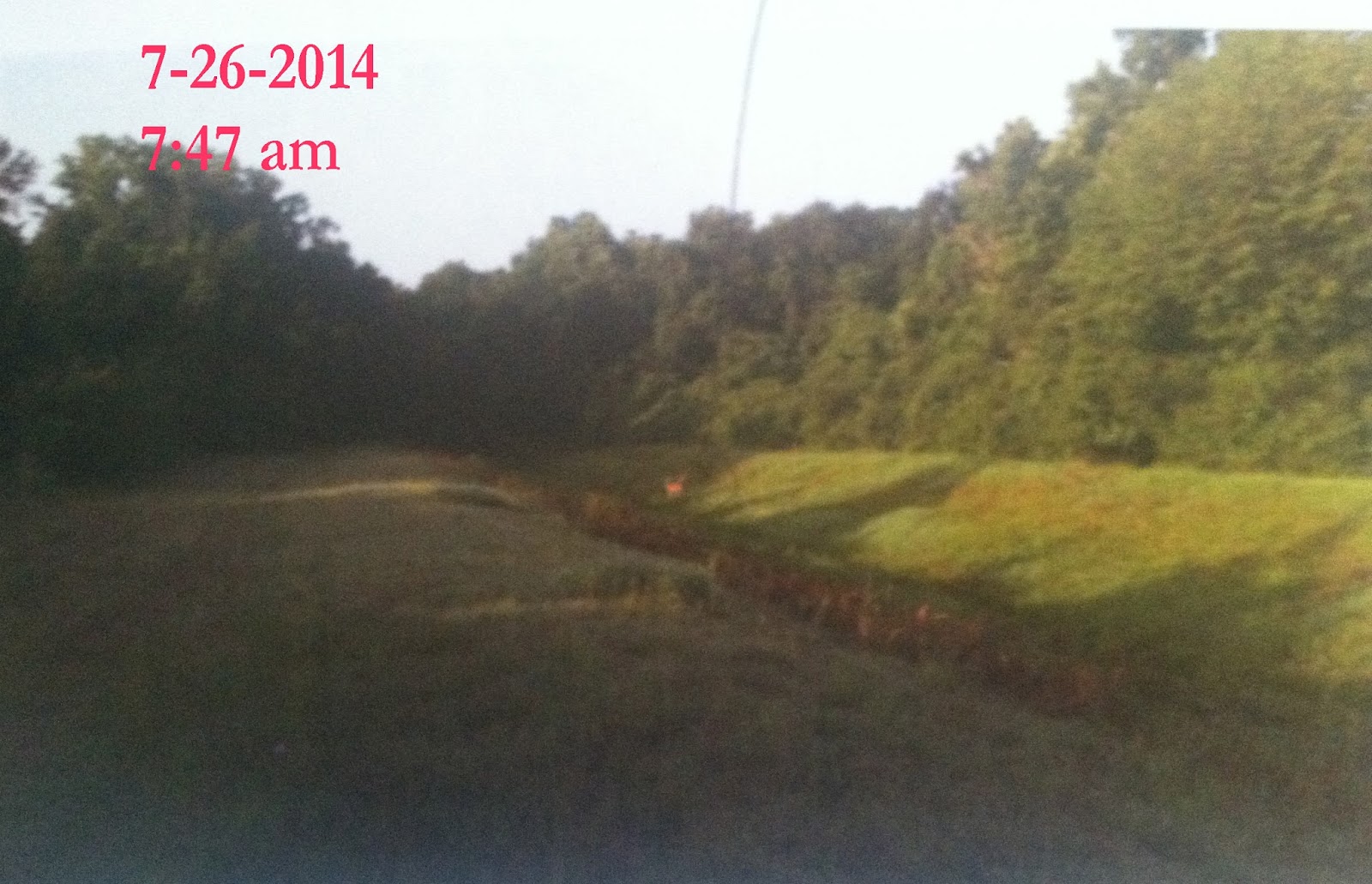 As I walked further south, I observed 2 more deer along the west tree line also feeding. One was a buck. These two saw me and then crossed through the ditch to the east side into the east woods at the interaction location. 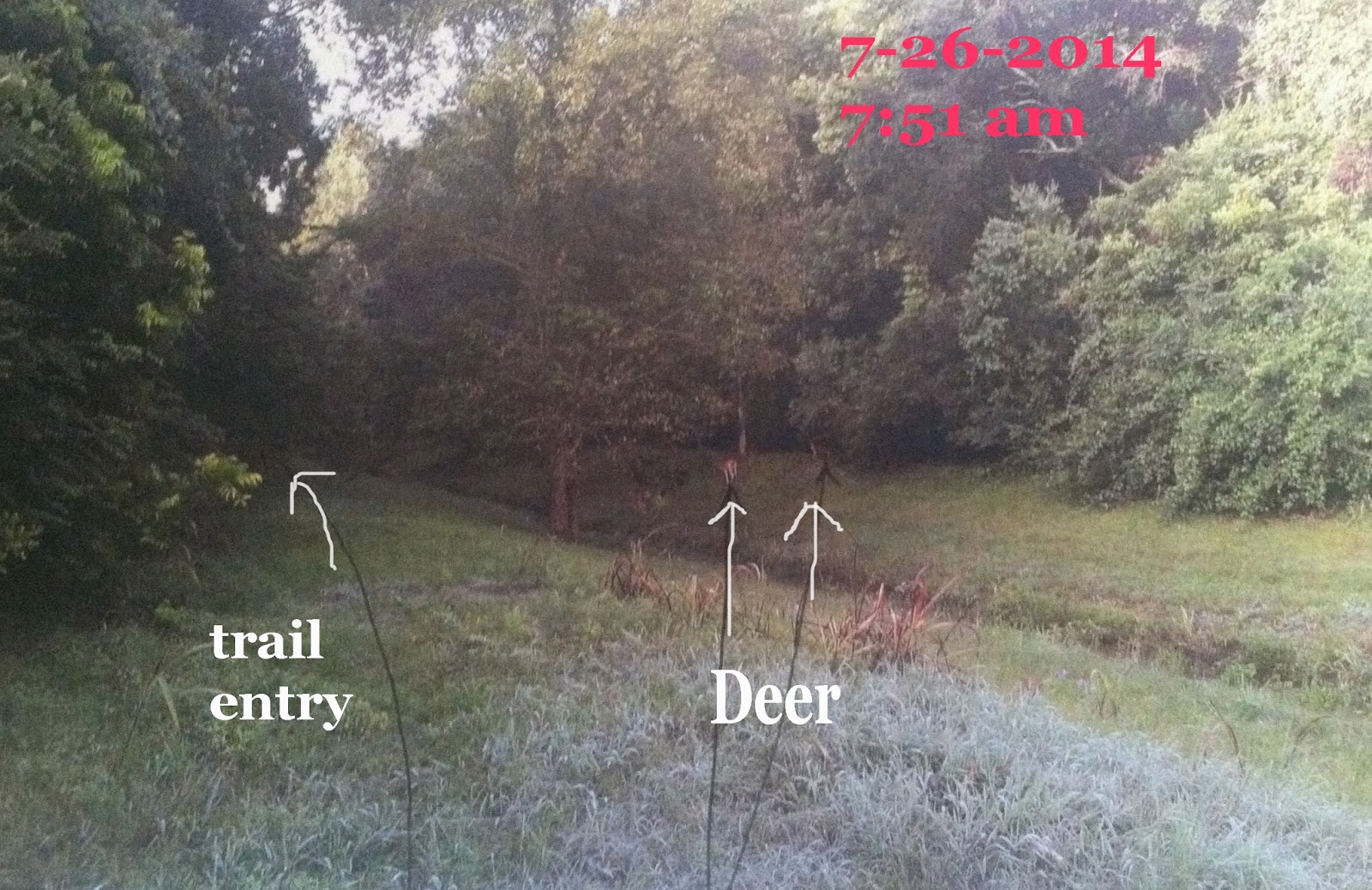 I entered into my investigation area and began to explore more of the junk/trash pockets. I was taking my time and looking things over closely when I noticed possible foot impressions in several spots. I pulled out my tape measure to measure one impression that was 15 inches long by 6-1/2 inches and 4-1/2 inches, it was moving west to east. I also put my cap next to it on the ground and photographed. 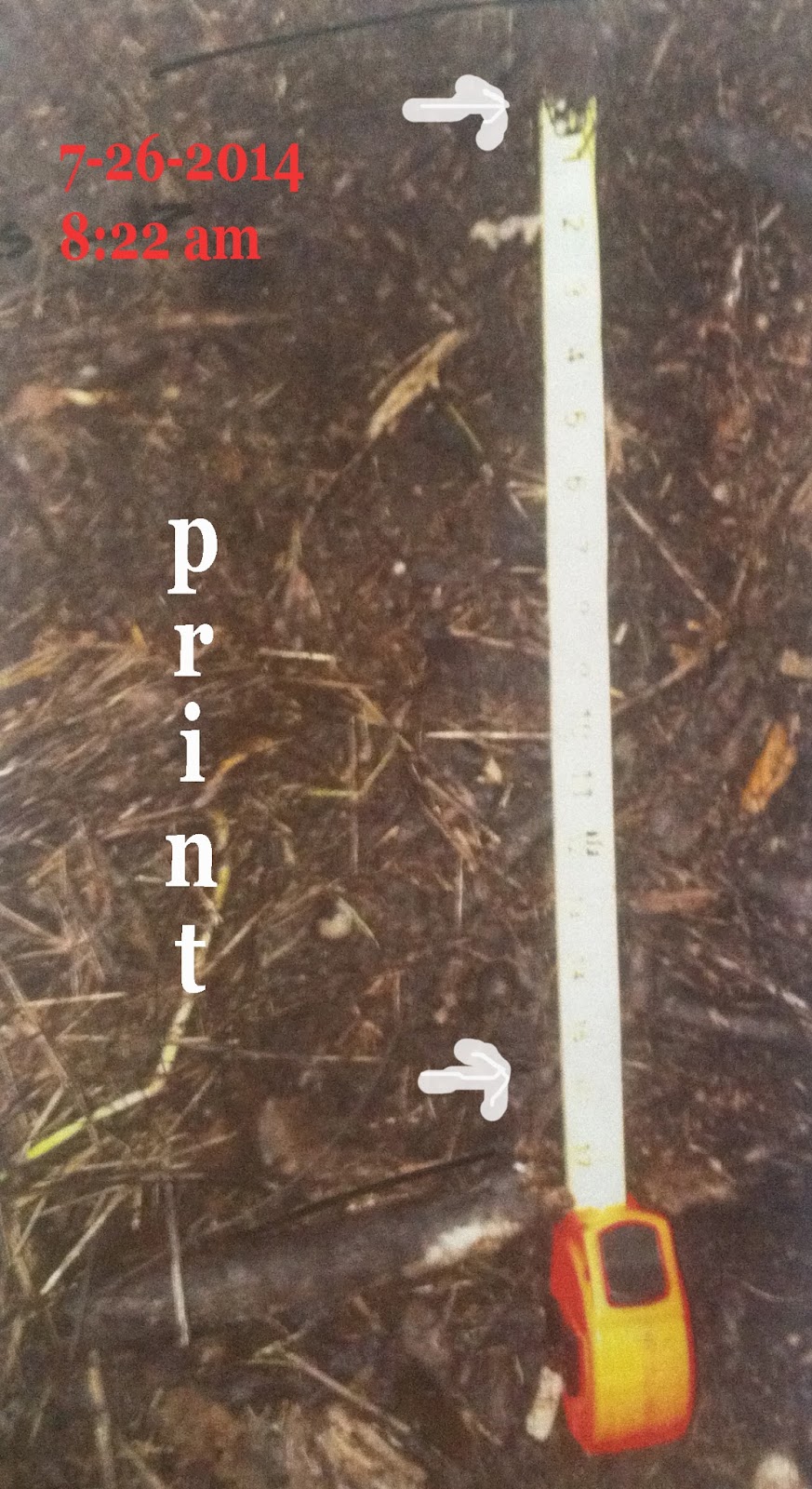 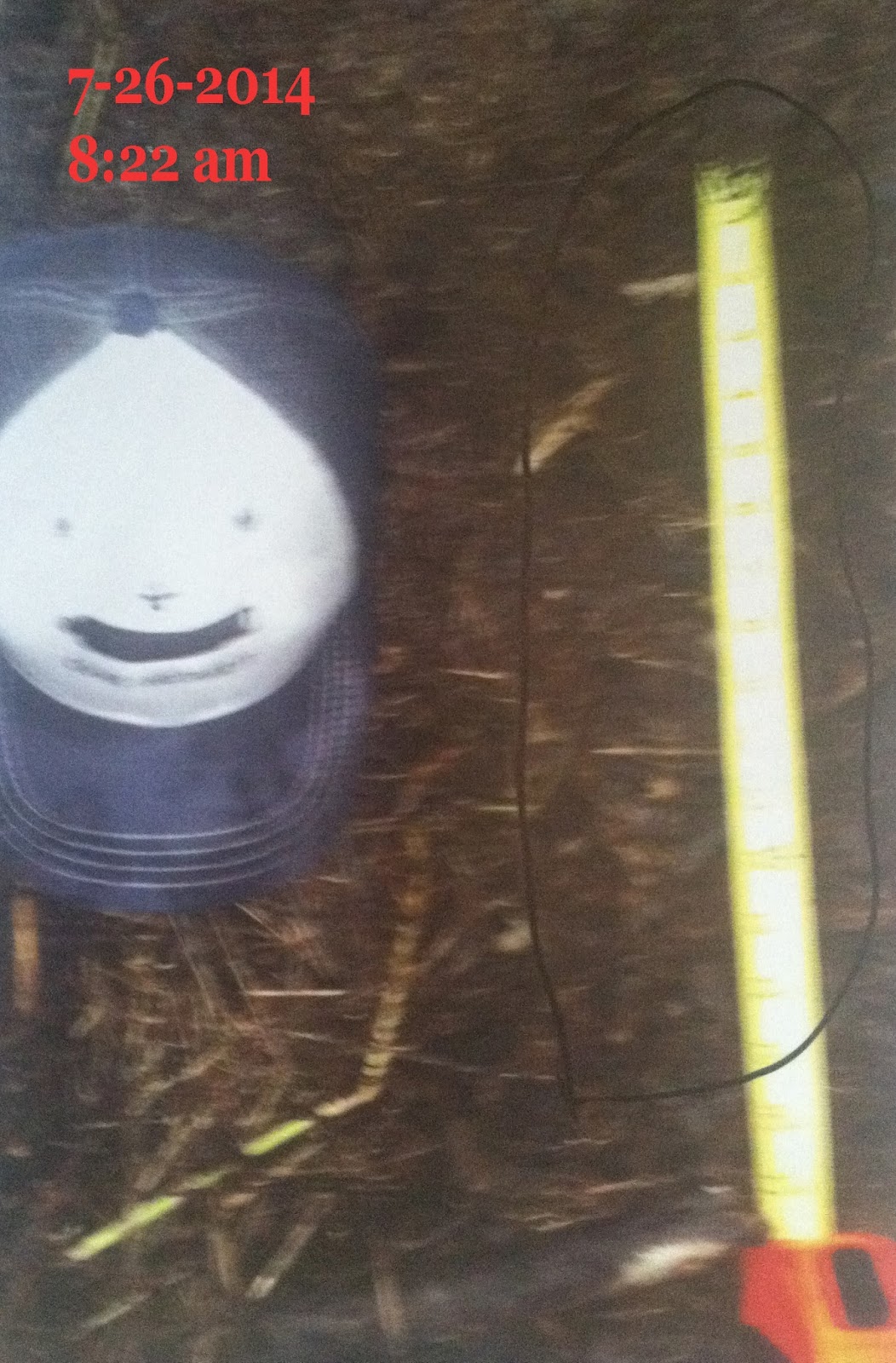 As I moved on, I came across a most unusual structure. It seemed rather unnatural and yet an ideal natural recliner to sit and view things. I took a photo because it just felt odd. 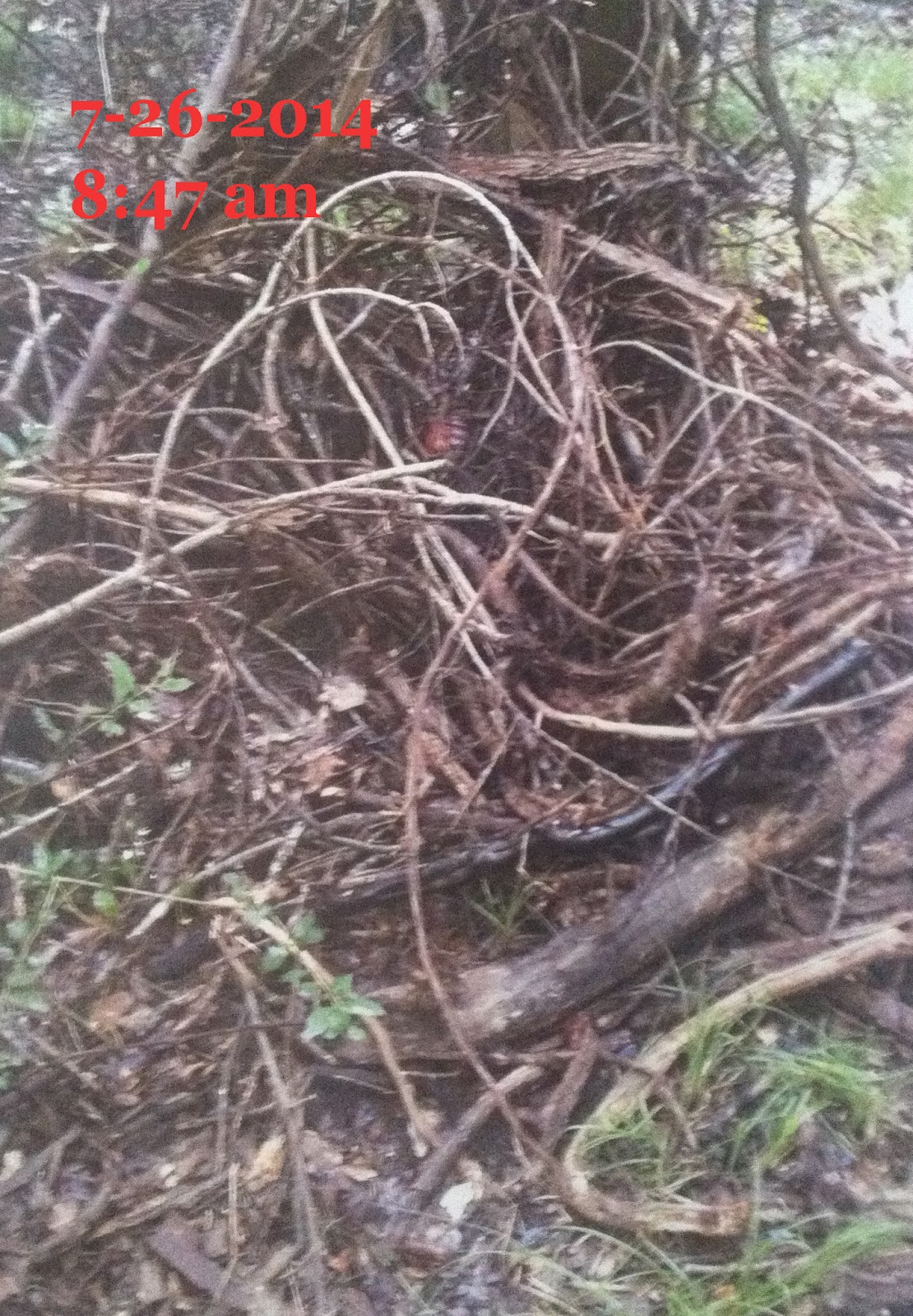 I explored the north edge of the area and found another good tire placed down flat at the base of a small tree. It also had several sticks that seemed to be put inside the tire opening.
I had walked this spot several times previous, but did not see this tire. I believe it had been put here recently. 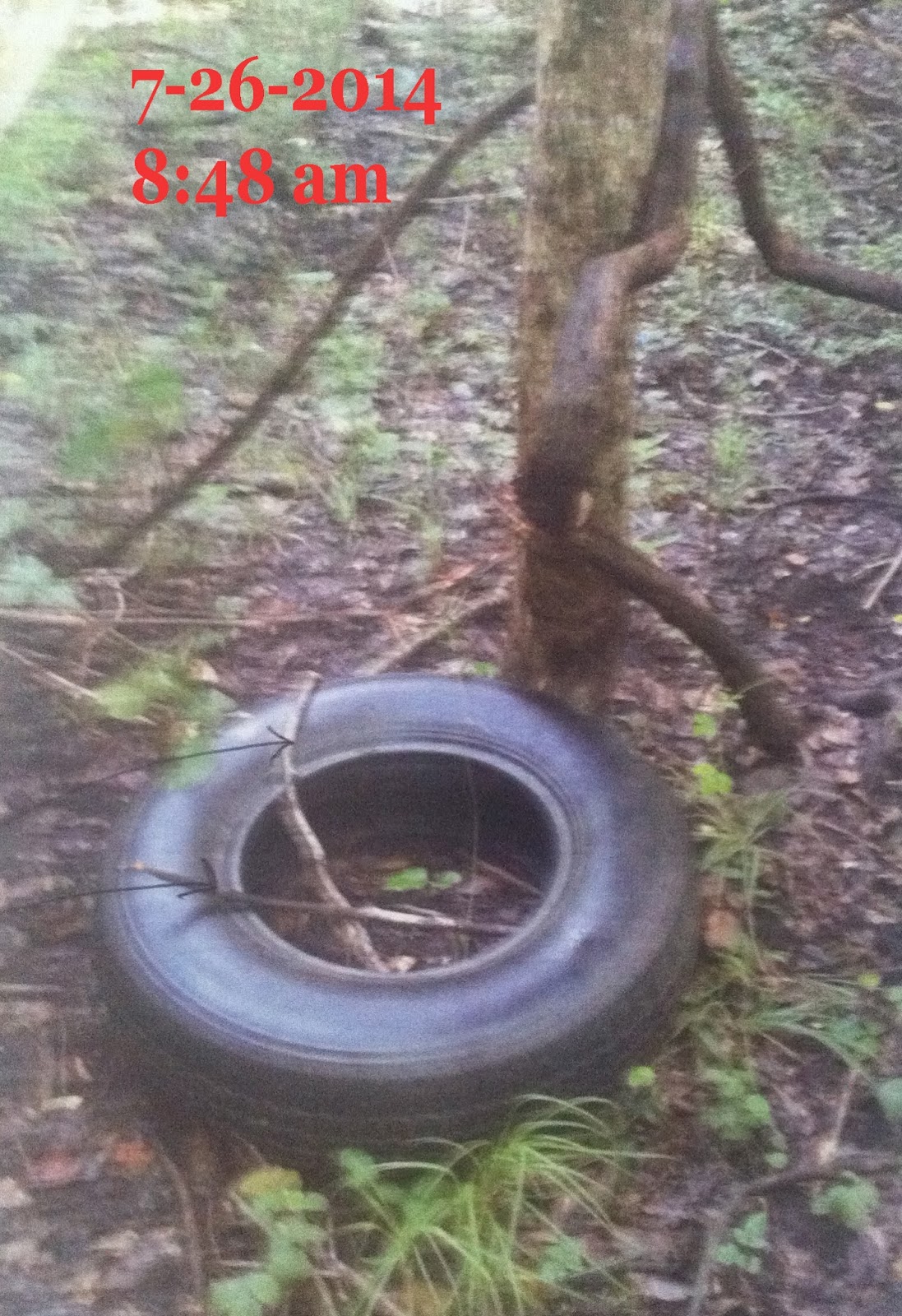 I took the tire and placed it upright on a thick vine that had grown at a weird angle and could be easily pulled off the ground at the tree. I also put the sticks on top of the tire and took a photograph. 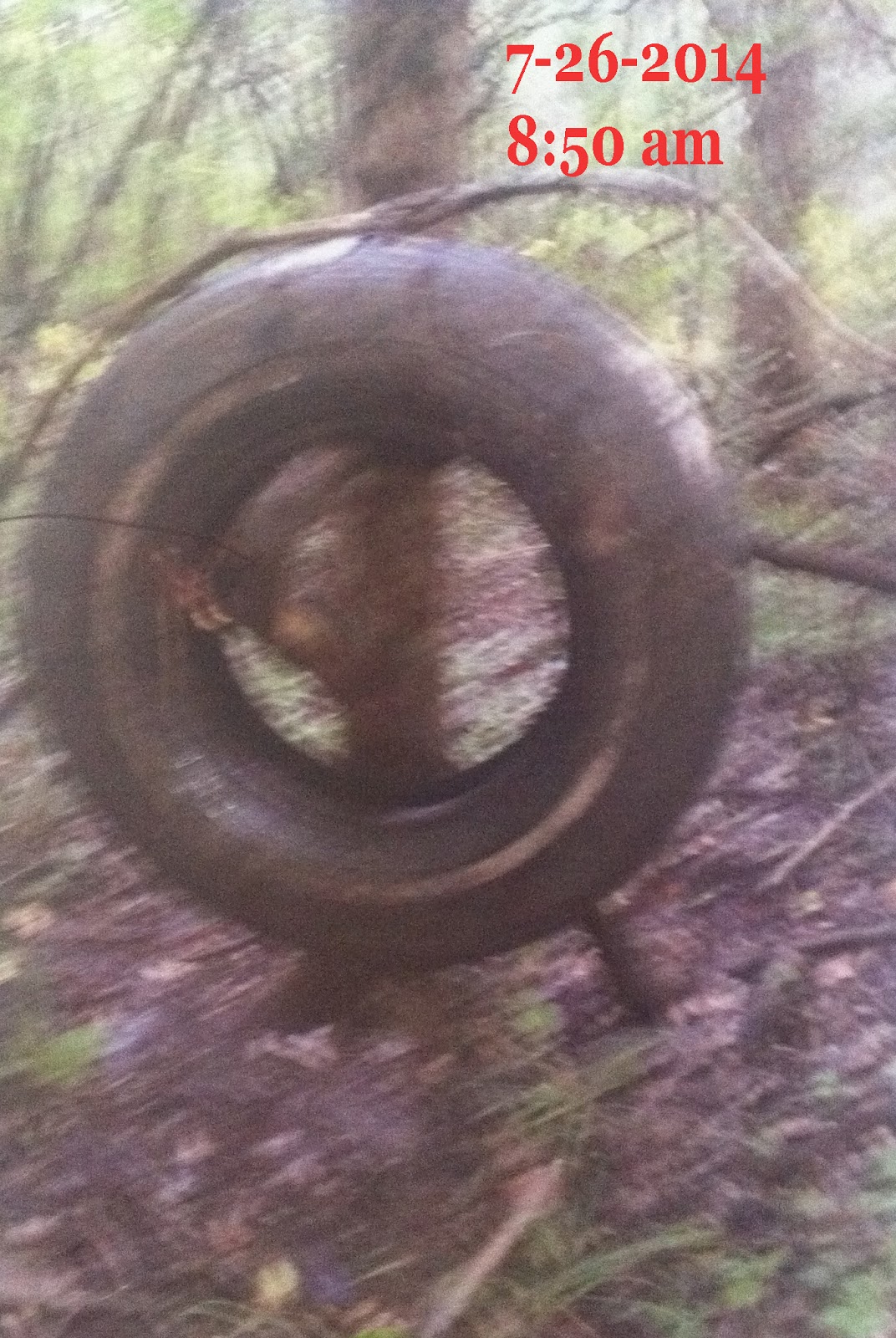 I then moved to another junk/trash pocket and took several photos to show what one looks like. These pockets consist of plastic and glass, etc.  This area has many of these pockets. It also looks like the hots root and wallow in these as the dirt in the pockets have been turned over a lot. 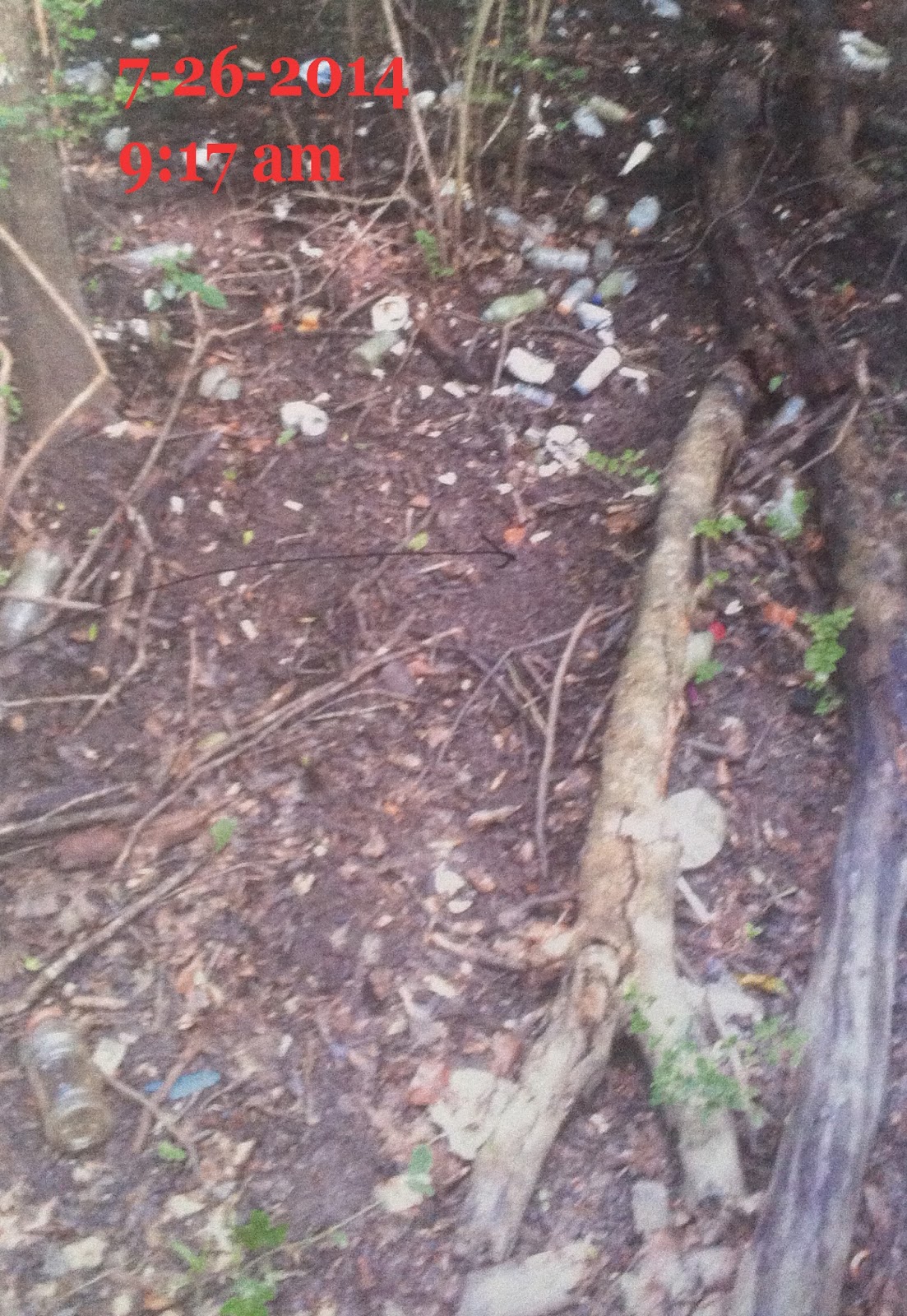 At this visit to the pockets, I have found 77 balls of all sizes and placed them close to a log and put them in an orderly formation.

Also, I found a blue sign and more plastic toys. I have taken a toy frog doll and stood it up on the tire formation. 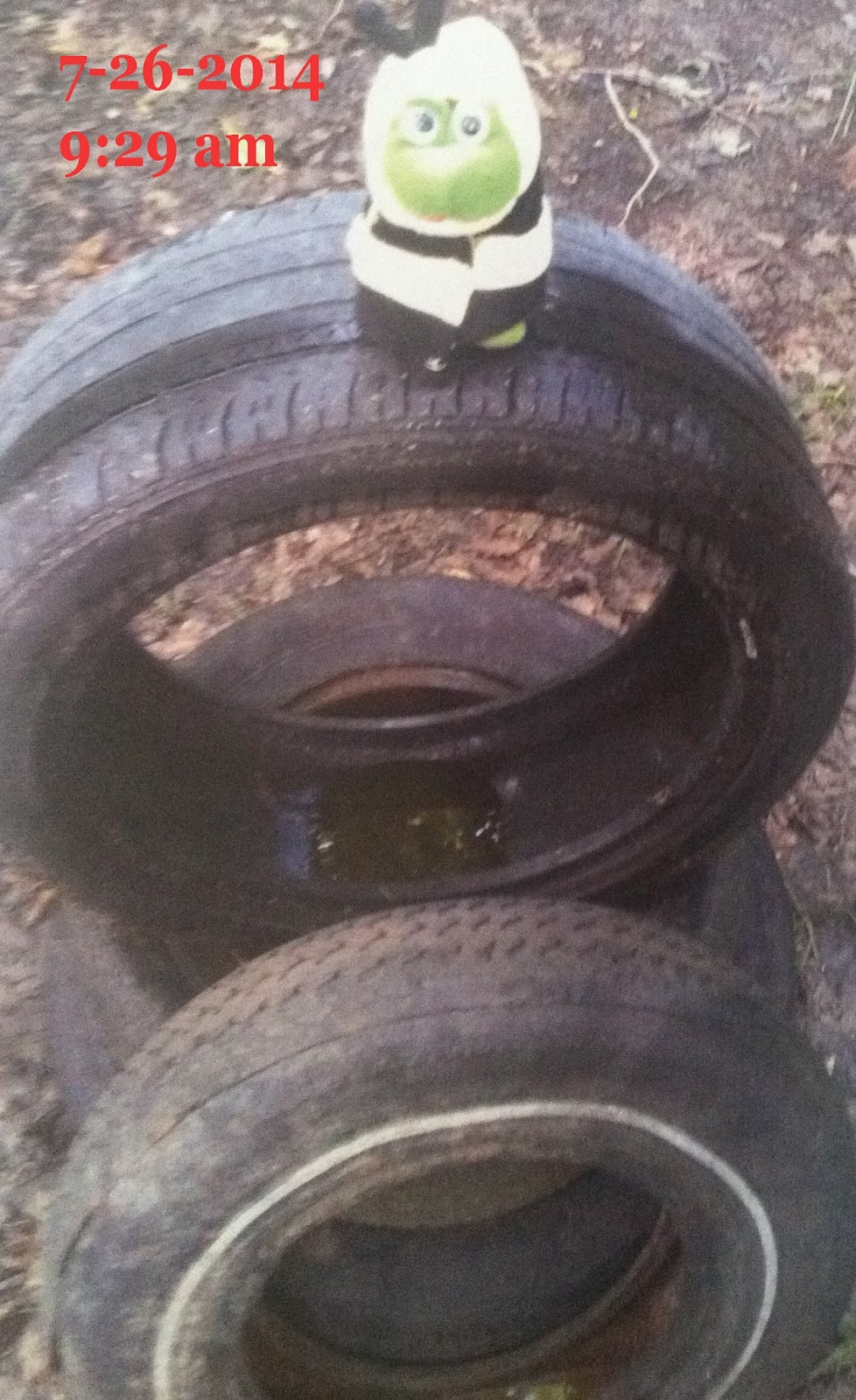 I made a rock circle in which some of the rocks have been moved. I put a large snail shell over a tooth brush in the center of the rock circle. I'm curious to see if this will be moved.

I brought 2 large rocks from the old fire pit to the north and placed them around the rock circle with limbs moving out from the circle to the large rocks.

I put 2 sweet treats behind the vines on the large tree.

I put an open bag of peanuts in a fabric hanging  grocery bag with carry handles.

I also put another bag in the crook of the smaller tree within the interaction area.

I added a long plastic 1/2 pipe section to the plastic covers area.

The main intention with all of this was to provided a response or interaction.  I wonder if items will continue to be moved? Will they trust me at some point and wish more interactions? And, ultimately, will they show themselves to me? I hope so.

After several hours there, I left.

This visit provided an exhilarating adrenalin high.  There was an awesome interaction, if my interpretation and realization is correct.

At 4:40 p.m. I started hiking to area #1.  My goal was just to see if any changes had taken place since the last visit. I made a decision not to do any new set-ups this visit.

At 5 p.m., I arrived at area #1.  The following items were noted in the grassy area near the trail opening: 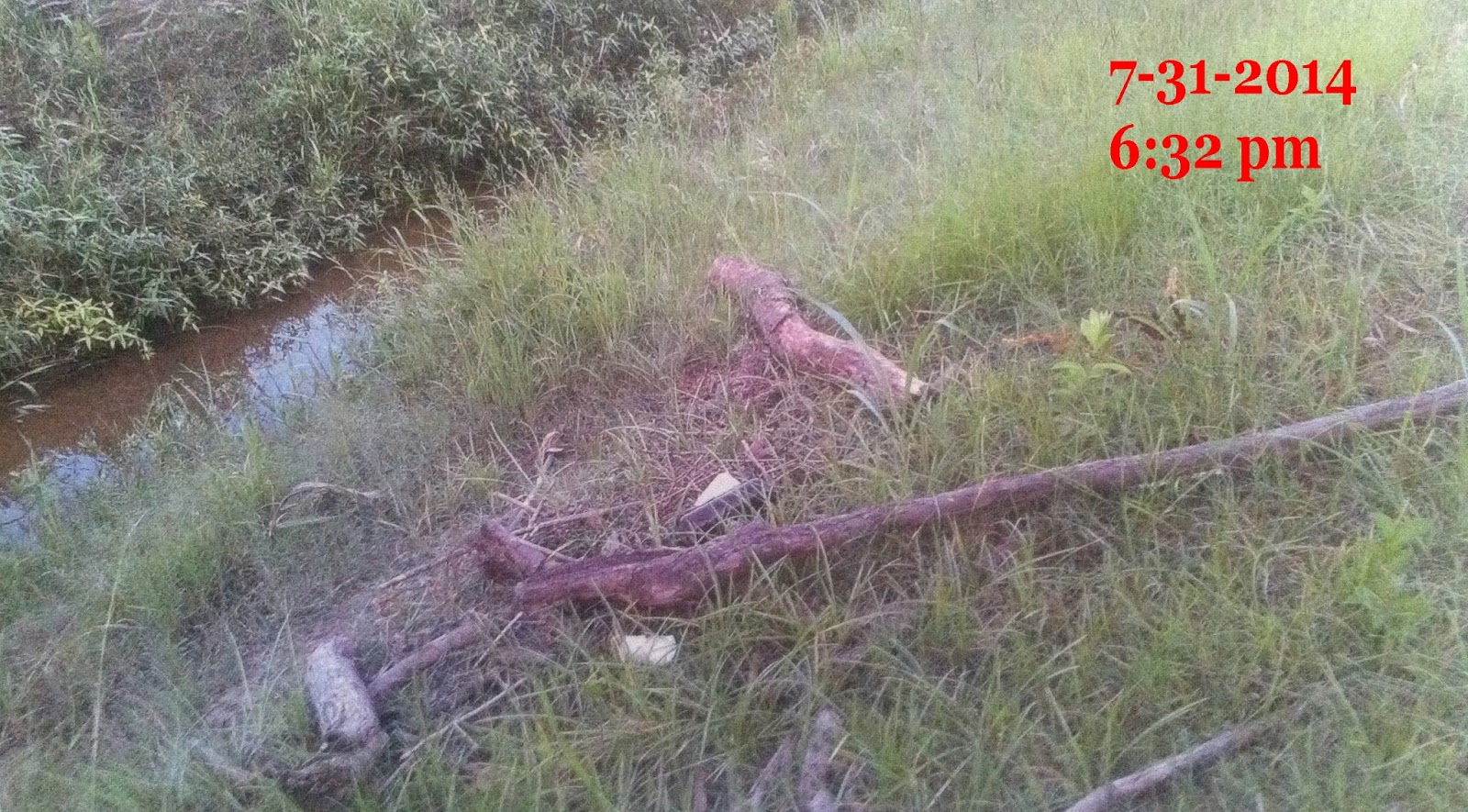 3.  At another tree just to the south along the ditch and grassy area had possible hog rooting activity. The ground around the tree was torn up pretty good; however, there were more foot impressions in the dirt. It looked like 3 possible impressions. I did take photos and measured the impressions.
a.  1 right and 2 left foot impressions approximately 12 inches x 5 inches x 4 inches. Could this be a juvenile? 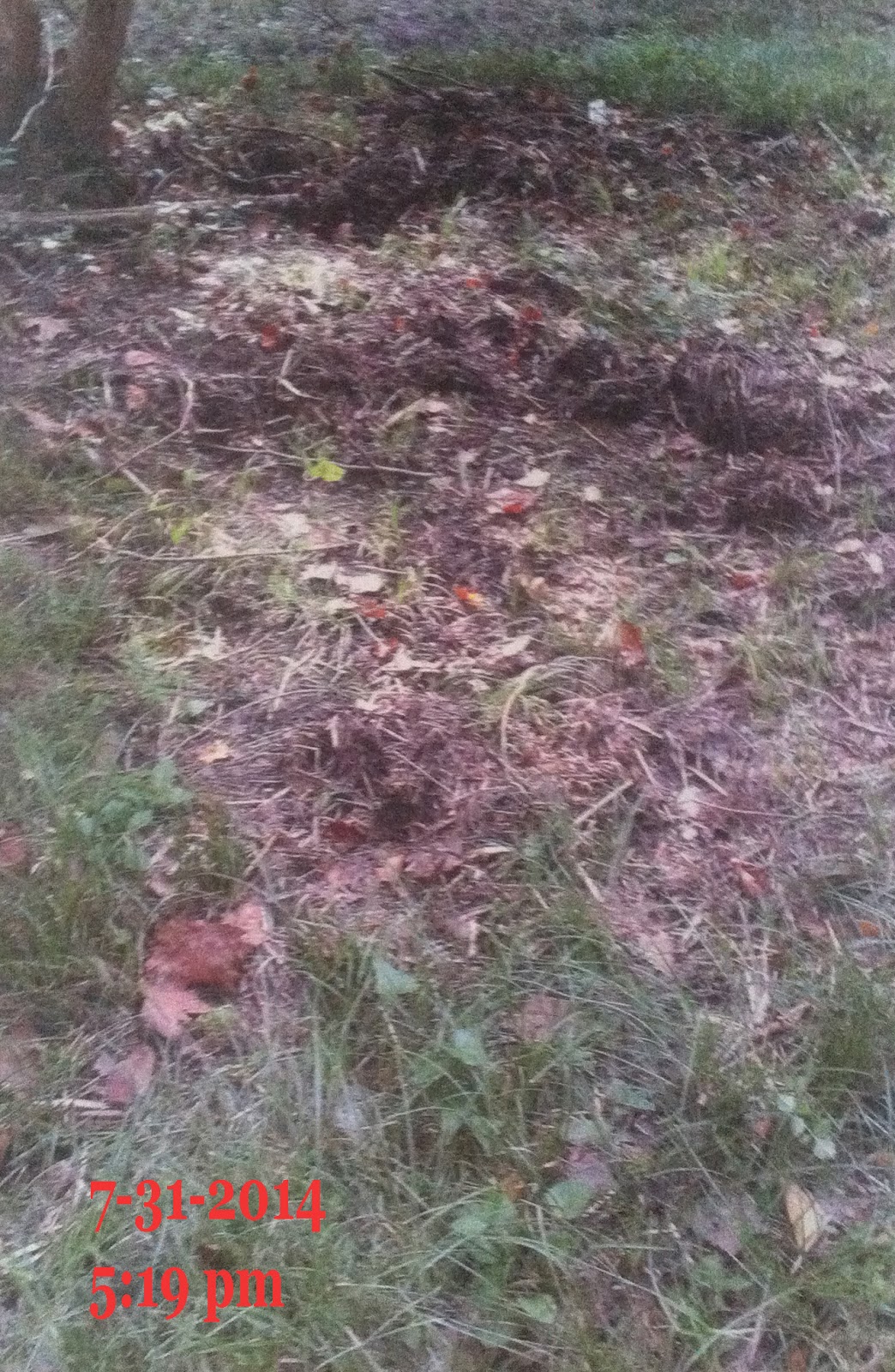 I moved into the set-up clearing area where I observed and noted the following:

1. Some of the balls had been moved and jostled at my collection near the 2 logs. 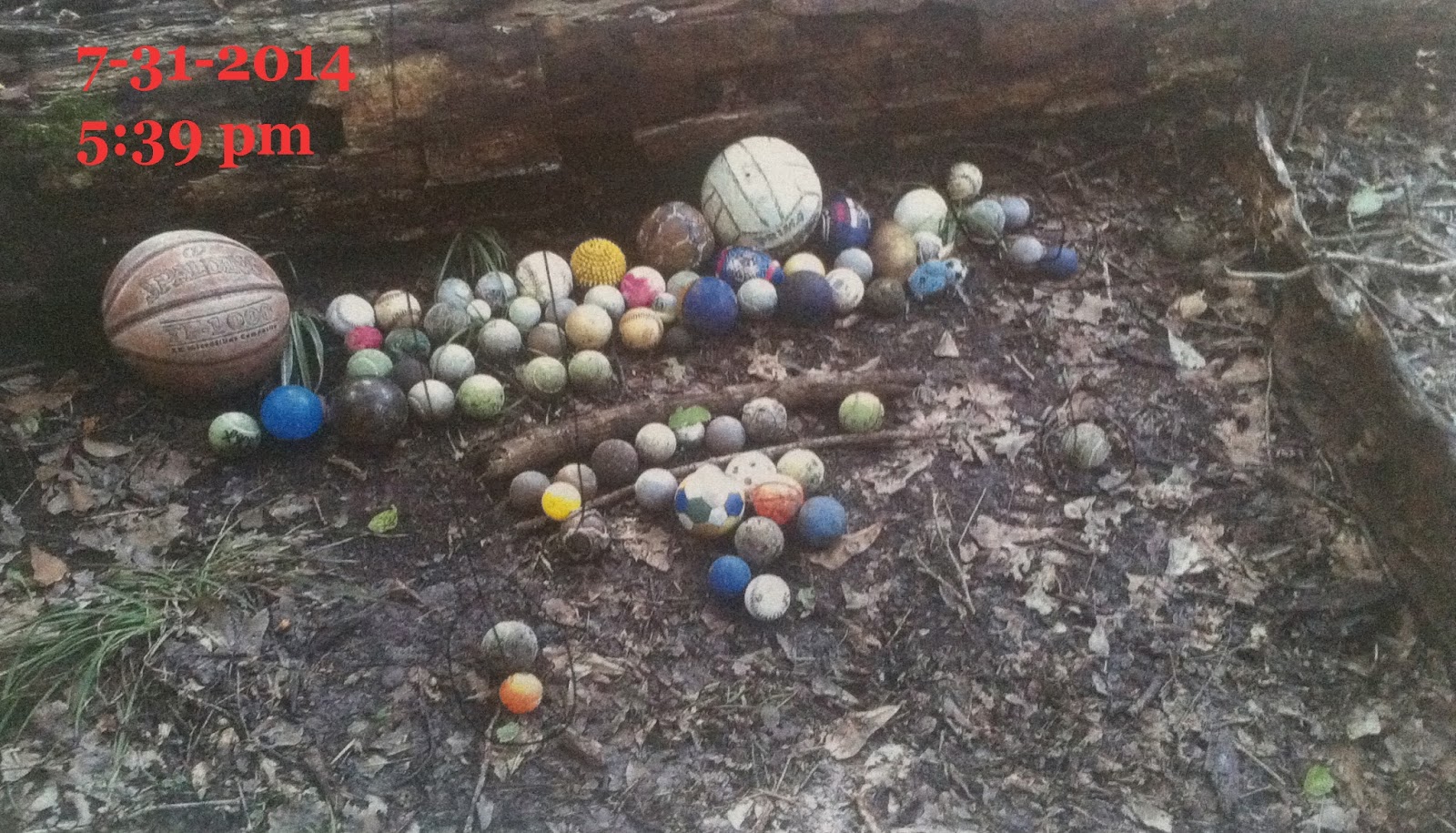 2.  A blue sign I found, I had stood against a tree and it was now leaning. 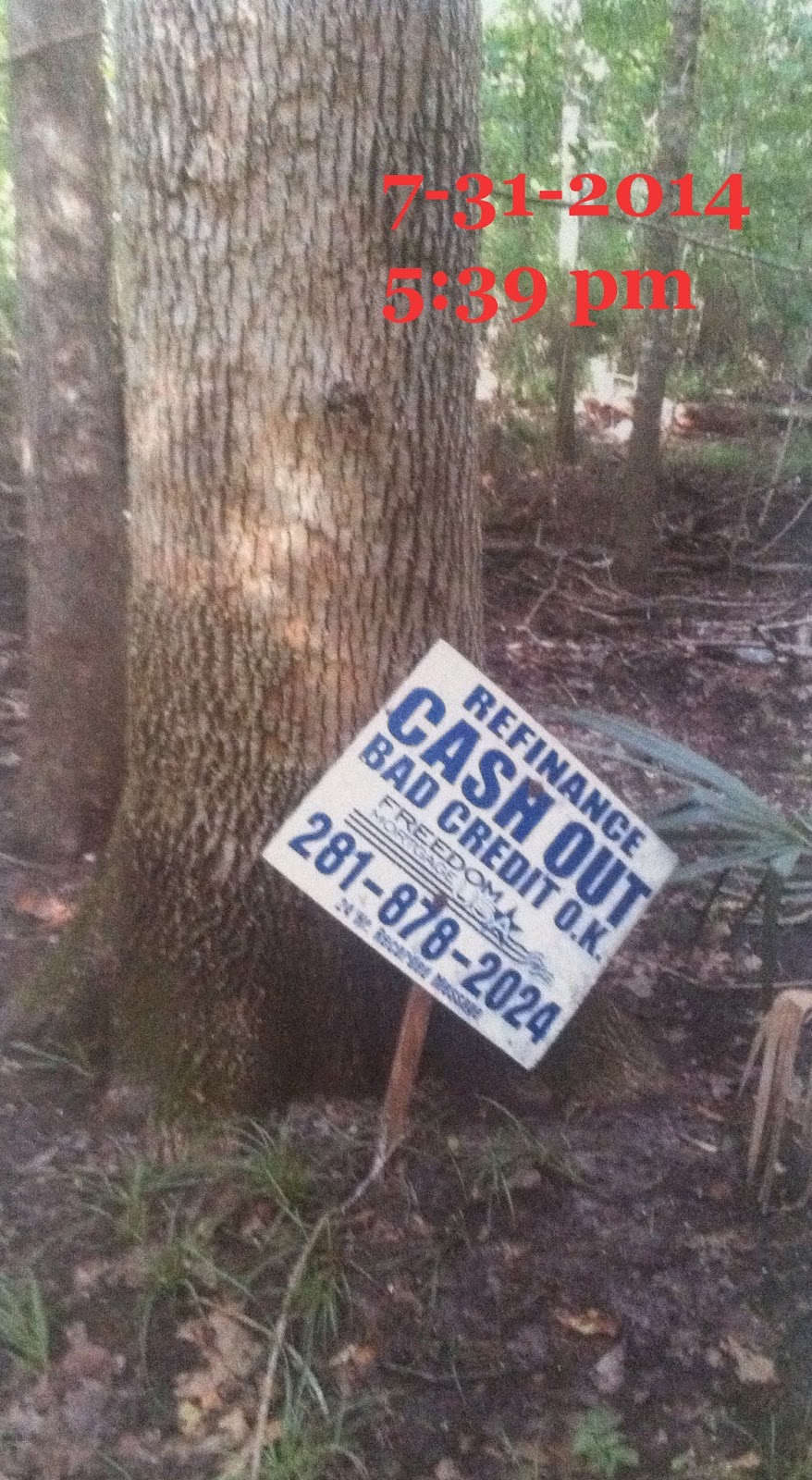 3.  The heavy duty plastic pipe with concrete around the inside, had 3 sticks laid out in front of it. The left side stick had a small limb like an offshoot pointing to the left. I took my time to observe this and wonder at whether this was intentional direction. I will write more about this in the next paragraph. 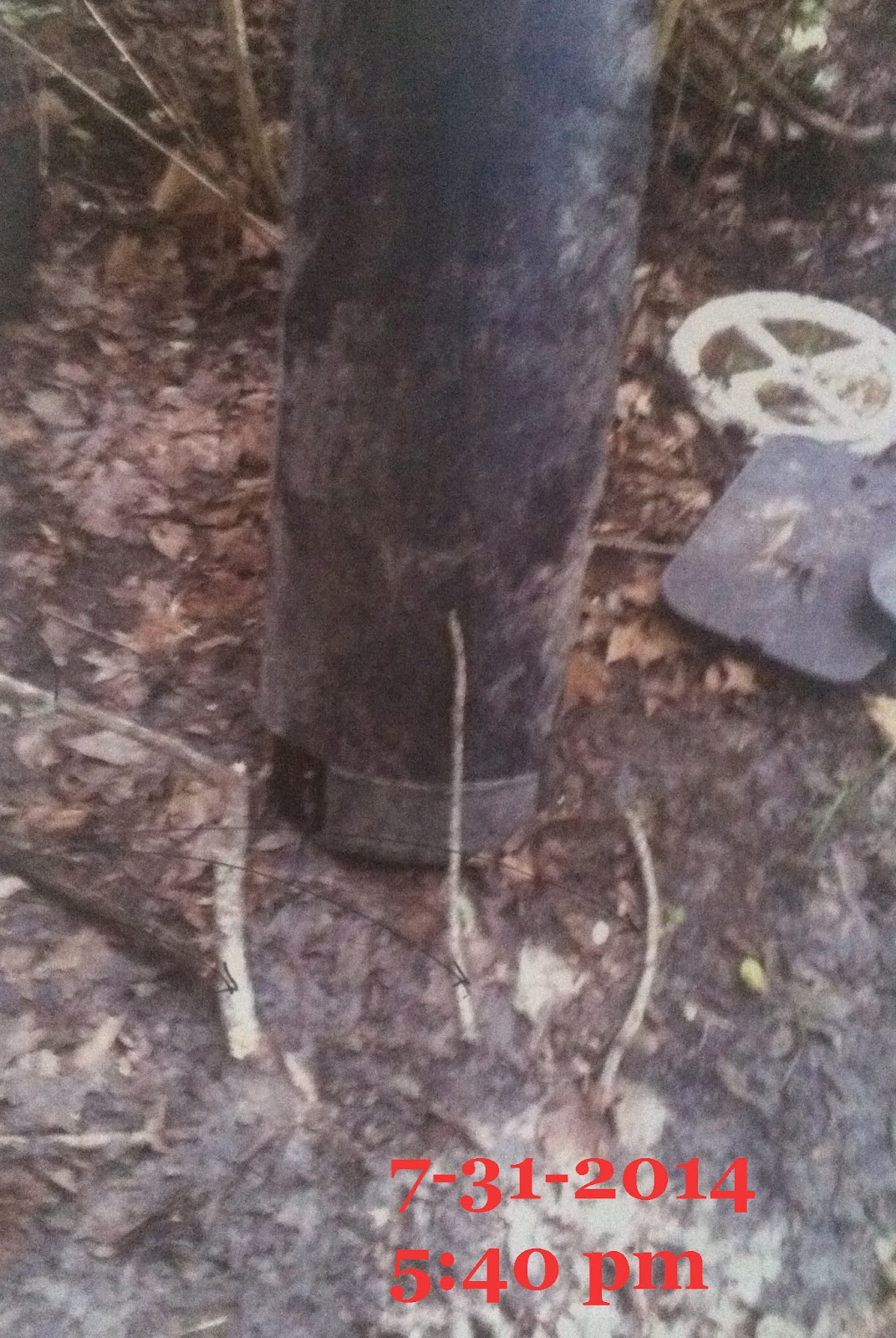 4.  The bag of opened unshelled peanuts and sweet treats from the gifting tree had been taken, the peanut bag was left behind. 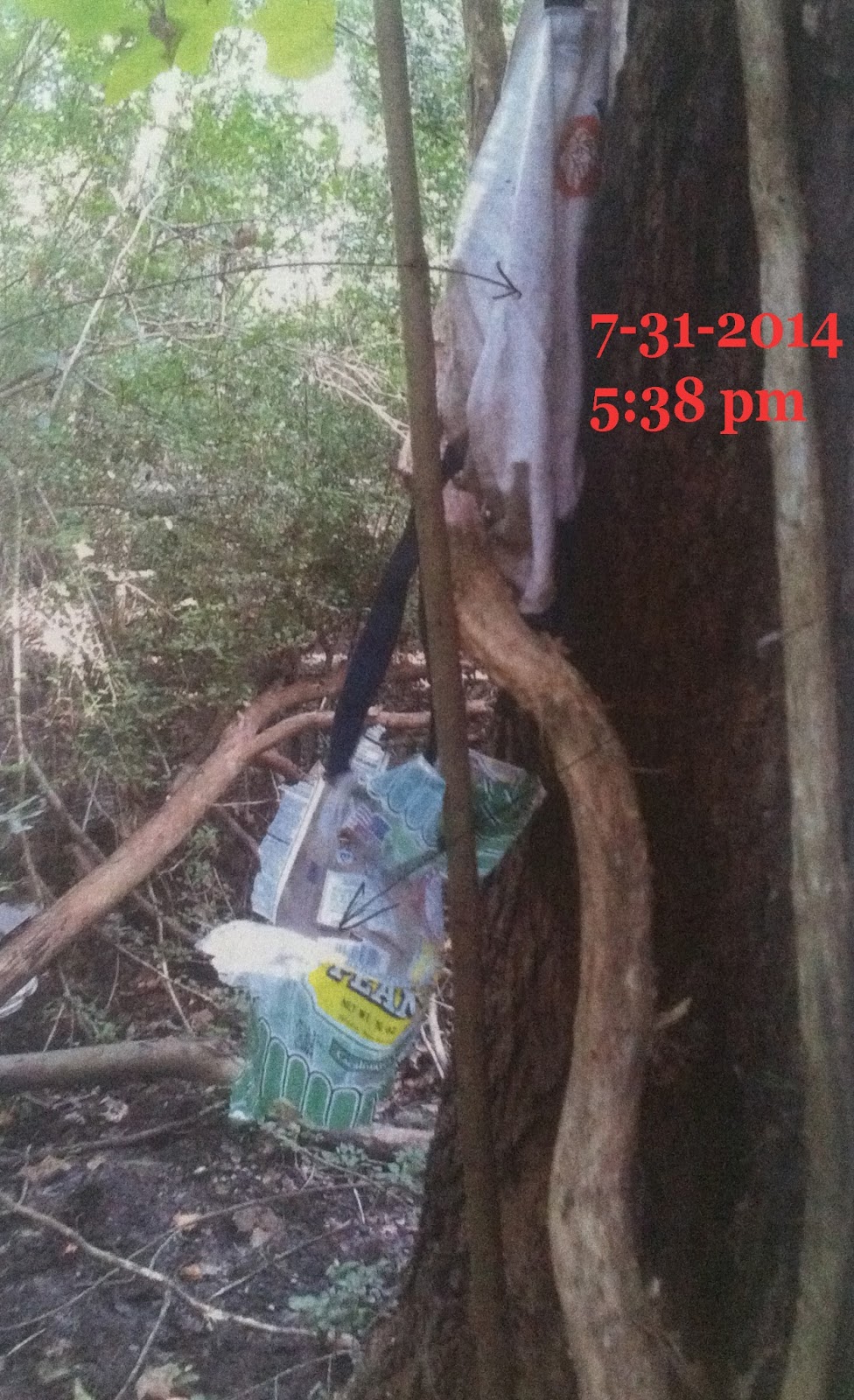 I followed the small limb offshoot that pointed to the left and headed left only a few feet when I found another v-arrow directional pointer. Was I reading this accurately? What were the odds that one pointer lead to another?

I considered the fact it was near the log that I had relocated for all the plastic garbage lids and plastic water meter cover lids. Perhaps these pointers were in response to my pointers I laid out recently? Had they picked up on the intent?

I stood at this second pointer, back to it and facing the direction it pointed. I took a few steps and glanced back and forth. To my left, I saw a ball approximately 10 feet away next to a small tree and possibly 2 foot impressions by the ball. I took photos and removed the ball. I said out loud, "Thank you for the ball." 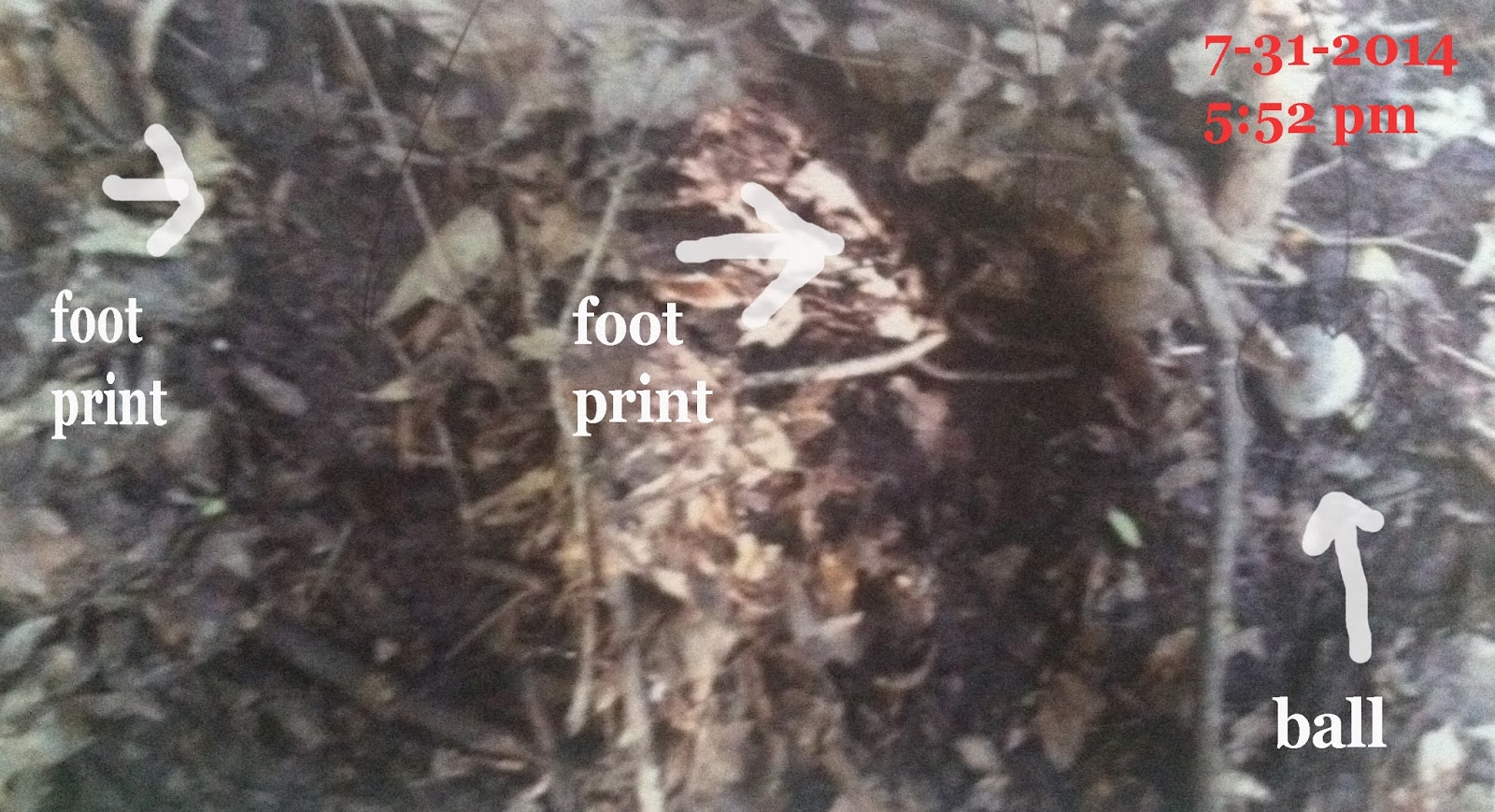 After some contemplation, I once again stood at the arrow facing where it was pointing and walked approximately 30 to 40 feet and there was an arch made of a small tree bowed over with the top under a log.  Under the arch was another ball. Again, I held the ball up and said, "thank you."  The visits earlier had produced other balls found in the same location. I thought I had picked them all up. It might have been that when the hogs rooted through the junk/trash pockets, more balls came up from the soil that were buried.

I do believe these were intentional arrows and intentional ball offerings from the Sasquatch and that they were copying my arrows.

I gathered the ball offerings and placed them inside the wood arrow that had led me to them to show that I had found the offerings. 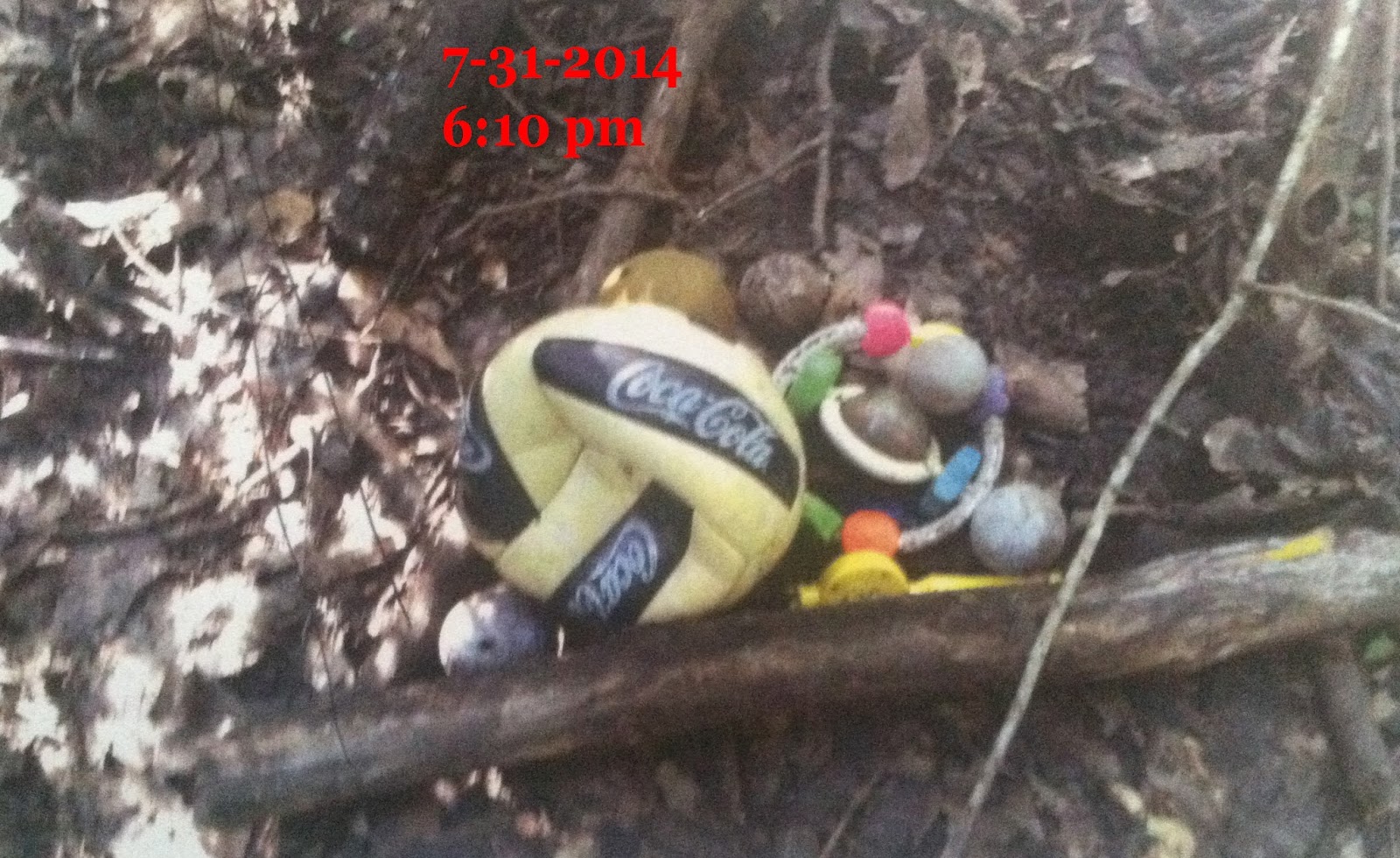 As if the woods recognized my realization, several crows began kawing aggressively and loudly for 20 minutes nearby. This is the lowest I've ever heard the crows. It was as if they were in the trees all around me. In fact, I got so unnerved by the loud sounds, I kawed back at them.

Just before moving out of the area to the grassy area, I heard a movement to the northwest of me. Was it a Sasquatch? Deer? Hog? I couldn't identify which, so I packed up after putting more sweet treats at the main tree.

I found a 'pocket' approx. 40'-50' into the west tree line.  At first, I saw no balls and asked 'what was I supposed to find here?' Then to my surprise about 3' away from where I was standing was a ball. I was floored. I picked up and held it up and said, "thank you."

From this spot I was in line with the tree at the ditch and limbs arrow pointer. I then walked straight towards the tree and arrow pointer and came across another 'pocket' I had missed. I again asked, "is there a ball here also?' And, there was. Amazing! I said another 'thank you.'

Both of these smaller, missed junk/trash pockets on the west side of the ditch, lined up with the limbs arrow pointer by the east side tree down in the ditch.

The 2 balls found on the west side, I left them inside the junction point of the 2 limbs. I left them there to show I had found what I had been directed to. I did the same with the other pointer in the site area location, leaving the other balls and other items found at that limbs junction point.

If this is what is happening, I'm impressed. What a visit this time!