How Long Have Humans Been In America? 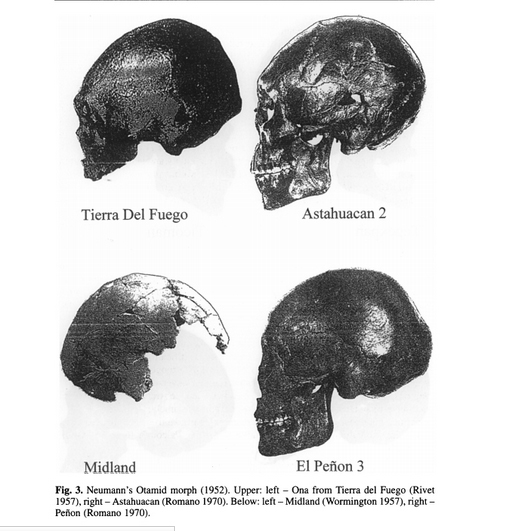 (Otamid skulls above - described as sloped forehead, pronounced brow, robust bones, powerful jaw, os inca bone in the back of the skull) 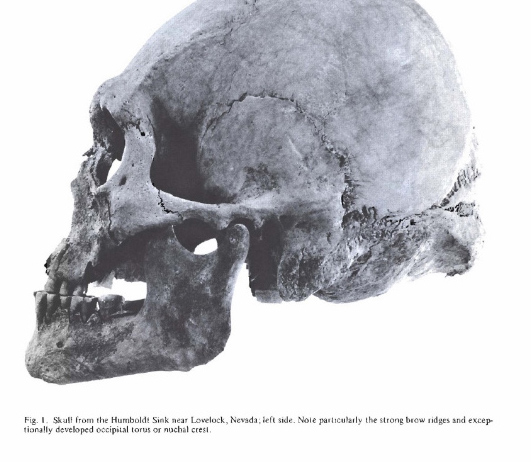 (Above: Slope-headed "Otamid" skull found in Humboldt Sink near Lovelock Cave - see my post on slope-headed ones)

Repeatedly in my research, I run across this "unknown hominin" talk among the anthropologists. They especially are baffled by finds in the Americas that don't match up with the Amerind (American Indian) migration which some researchers, like Neumann (who classified skull shapes) called the second migration. He referred to the "Otamids" (slope-headed, robust sized, strong mandible, strong brow ridge, os inca bone creating pointed rear of head, displaced mental foramen shaped skulls) as the first migration.  There have been names bantered about for these people including Homo Sapiens Pampaeus.

Some of researchers' estimations on what they find go back 20,000 to 30,000 years ago and perhaps beyond. It was generally accepted by those who believe in the land bridge theory, that homo sapiens did not arrive in America until perhaps 11,000 years ago the lastest - following ice receding.  It would appear that either they are uncomfortable with an earlier man here in the Americas because of views that it didn't open until until man could walk here or they have been concentrating on things like Aztecs, Incas and Mayans and not wanting to look at older finds.

Researchers found the Yaghan Indians of Tiera Del Fuego way at the tip of Argentina to the extreme south, had the Otamid skulls and no Halotype A or B DNA as found in Amerind people (second migration).  Given their physical characteristics and the Argentinian finds of these "primitive" looking people (this reference by early researchers caused a bottleneck of new thought on these finds) one can assume that the two were likely related. 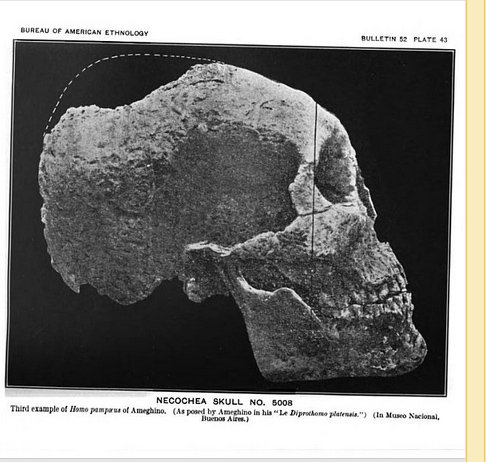 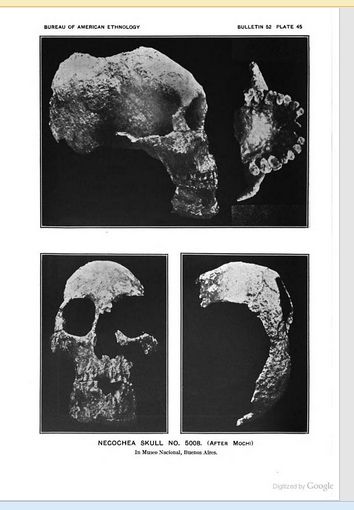 Let me give you a taste of this odd type which was referred to as Homo Sapiens Pampaeus (or Americanus):

Overview of Paleoindian Taxonomy and Migration Hypotheses by Mario Pichardo

Amerind Paleontology
Homo sapiens Americanus (Linneaus) - long and low-headed populations with elongated distal limbs. Present 10,500 BP (before present, in other words, 10,500 years ago from now)  maximum 4900 years BP.  (del Mar skull) Continues into archaic and middle woodland periods from Texas coast, Louisiana, Midwest to New York and Maine (Neuman 1952). Folsom-aged skulls, midland, penon, tlapacoya-2 (9730  plus or minus 65 years BP) are otamid and “derived” respectively. No ESR dating has been attempted. Other otamids – baja California (Pericue - aboriginal people of Baja with skulls of one general form, namely, the pyramidal -- high, long narrow, with wide, prominent cheek bones and buried with shells.) The only more primitive morphology is the Lagoa Santa, small thick boned in Brazil, Some limb bones of a giant ateline (monkey) from Lagoa Santa might be referred to as the same hypodigm. Otavalo skull of Equador (dating 2300 years ago). And thick boned cranium in Chapala Mexico (see conclusion below). No correlation has yet been determined between these thick-boned people. Hybridization may be the cause – as sometimes hybrids take on strong characteristics of one parent.  Clovis reveals a rapid jump in technology and tool kits as man headed south. Clovis may have come from earlier Sandia points at the Lucy Site  in New Mexico ((wormington 1957)

"Cranial deformation (Early Man in South America - page 300) among savages is a ritual operation denoting contact of peoples...agrees with Professor Ameghino's `first representation of the human beings,' if not even man's forerunner, Homo pampaeus." (in other words, they were emulating these original ones)

Carlos Ameghino (who studied the earliest South American finds - page 309) said that the 3 skulls found in Pampean formation "Necochea" were the same age as the Miramar skull and what he calls homo pampaeus which has excessively sloping forehead, which is natural and not the result of deformation, very doliocephalic, with excessively narrow foreheads, great orbits and other characteristics...." and "...the conformation of the frontal region is natural without any vestige of artificial deformation; on this point, there cannot remain absolutely the slightest doubt....

One parting note - researchers are very confused at old research (1800s/early 1900s) and standards for archaeology and anthropology and all these things that are "out of place/time" compared to what they were told in school. Many researchers refused to believe time periods of finds and had limited knowledge of aging items. If they found something that seemed older than what they believed technology to be, then they dismissed it as an aberration or invalid evidence.

Amazing finds blow researchers minds (website)
The evidence for earlier human habitation in the Americas, however scanty, is tantalizing. It includes:

- A possible handscraper splotched with blood more than 34,000 years ago at Monte Verde in Chile.
- Possible stone tools at a site in Brazil that is 40,000 to 50,000 years old.
- A not-yet-published report of human remains dated as much as 28,000 years old near Puebla in central Mexico.
- Most crucially, a majority of archaeologists are convinced that a second site at Monte Verde dates to at least 14,000 years ago - some 500 years before the land bridge from Asia opened more than 9,000 miles to the north.
Yet the early dates are still often questioned.
A claim of 250,000-year-old human tools near Mexico's Valsequillo reservoir was widely laughed at in the 1970s, though other researchers are once again working at that area...
Solorzano, 83, is a respected researcher who has taught generations of university students in the city of Guadalajara. His home office holds a cabinet full of bones - some of them human - topped by 14 realistic models of hominid skulls.
He says the brow bone raises "many questions, one of them being its great and amazing resemblance to primitive hominid forms whose presence in the Americas has not been generally accepted."

The few other scientists who have analyzed the bones closely agree that they look human - not animal - and are very, very old. "They were definitely human," said Joel Irish, a specialist in bioarchaeology at the University of Alaska, Fairbanks.
He suggested they could be from "a very primitive looking modern human," but said they would be "very early."


Stanley Davis, Texas A&M - said other human bones in the same area that are about 6,000 to 7,000 years old lack the mineralized darkness of age found in the brow and jaw pieces.  Davis said the Chapala-area finds included 12 scattered skulls of a long-extinct horse species. All have been smashed between the eyes.  "Either we have a herd of very stupid horses ... or we have some other action responsible for their death. That action is probably human," he said. He estimated the horses were likely 10,000 to 20,000 years old.  A cache of swamp-deer teeth included several that were grooved, apparently for use in a necklace, he said. A radio carbon test showed one was roughly 20,000 years old. "That tells us we may have something.

Ultimately, when we discuss how long humans have been in the Americas, it goes back many tens of thousands of years, not the awe-inspiring 11,000 year range of mummies found in South America, but a more ancient people.

What was the place of their origin? I'm less likely to be impressed by the old Hrdlicka concept of a land bridge trek from up north and down into the continent. We are missing important aspects of this puzzle, but continuing to push the land bridge agenda as if it were fact is yet another way that we've hit a bottleneck in new insights.

Well, considering that the Americas are still rather "new" as far as modern man settling and digging and exploring the vast amounts of lands compared to the smaller continent of Europe where finds have been tapped for many hundreds of years, we have a lot to find here yet. We do not know the story of her history so well.

I believe the South Pacific and Australia will yield a great deal of finds still to be unearthed, as well, showing that man was seeded all over this planet in very ancient times.

What was the origin of the ancient giants specifically? I'm leaning towards anywhere from Argentina to Australia. Look for me to chase that one a lot in the future here on GHT.

Other sources to check out

The First American: The Suppressed Story of the People Who Discovered the New World  by Christopher Hardaker (book)


The First Americans, Race, Evolution, and the Origin of Native Americans by Joseph F. Powell (book)