Does the Lineage Of Giants Still Exist? 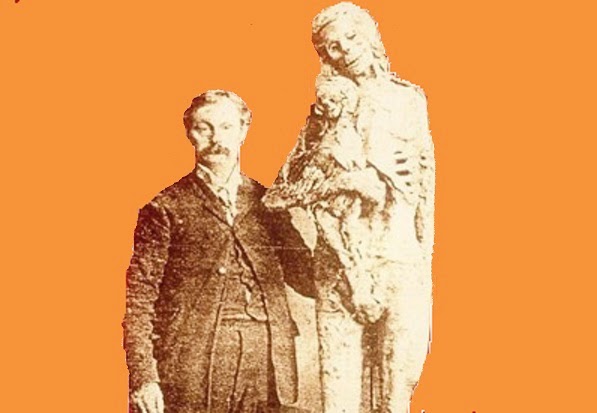 "There were giants upon the earth in those days" (Genesis, Bible)

In the rainforests of the San Juan Province of Peru, giants are upon occasion viewed who are exceedingly tall, hunchbacked, red-haired, speaking an unknown dialect and carrying clubs.  People in a remote village report them from time to time with fear and reverence.

We could probably dismiss extraordinary stories, unless they align with legends and physical proof - then we have what I like to call the "Holy Trinity Of Cryptid Research" - prior legends, present-day reports, physical evidence.

We know Peruvian giants to be part of their legends, including a legend of them reaching the shores in ancient times in reed boats, raping the women, eating the men, and settling in to build water wells and claim the territory, only to be supposedly stricken by God with lightning bolts and thunder for sodomy and barbaric actions. These would all be local legends if giants with red hair weren't dug up in Peru with elongated skulls. 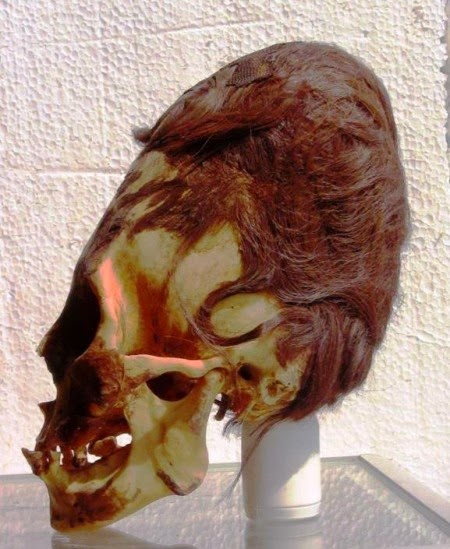 When added up together, you have a skeletal source for giants, legends to explain their presence in that same location, and even present-day accounts of seeing them in hidden recesses of rainforests in the area.

If you were a tribe of people that supposedly went "extinct" wouldn't you go into the woods and hide when the locals had attacked and tried to kill you off for your barbaric ways? Might some locals in remote areas upon occasion come across these clans?

The concept of giants being present today is an absolutely valid one and I would find it hard to NOT have giants today. We still are spitting out tribes in the Amazon we didn't know where there and large apes in the Congo that only locals had been talking about as eating jaguars and Max Planck Institute recently revealed to the world.

If you take a very sentient human being and place them in the woods for thousands of years, imagine their mastery.

The Solomon Islands have had reports from ancient times until today of giants, not only living there thousands of years ago, but still being encountered today. It is the islanders belief in Guadalcanal that they live underground in an enormous cave system.

What do we know of ancient giants? They were often found in caves, from Lovelock Cave to Death Valley, Grand Canyon to Europe. Native legends tell of them being cave-oriented. Today, still being attributed to caves.

Mt. Tattiva in Guadalcanal is said to have an entrance to this underground cavernous structure.  Gigantic footprints are still being found and in areas where locals have tried to build roadways and structures, heavy equipment has been moved. In fact, government officials were at a site and their truck got stuck in the mud. They left, came back and the truck was back on the road and footprints were estimated to be that of a 15-foot tall person!  Even a prime minister as a child was taken by his father to a burial cave where there was a 15-foot skeleton.

For decades the beast known as the "Ucumar" has been reported in the forested areas to the south of the province, particularly in Rosario de la Frontera, where numerous eyewitness accounts have been collected.

A rancher apparently killed a "cub" one, not knowing what it was. It had large green eyes, huge fang teeth, and finger, toes, and short black hair all over except its face. 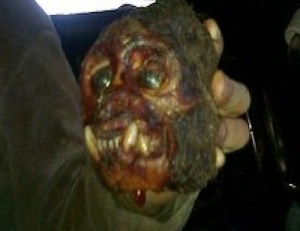 Even though this fellow wasn't fully grown, it is impossible to say if he was a cub or truly fully grown. The remains of the large-fanged carcass were placed in a special package to be sent to the city of Salta, where they shall undergo expert analysis. This subject merited the opening of legal proceedings by Mario Dilascio, Second Judge of Instruction of the Southern Judicial District.  The magistrate issued precise instructions to have the samples sent immediately to the capital city for their analysis by scientists, in order to conduct a precise classification of the anthropoid’s characteristics, and to ascertain the reasons that apparently brought it so far from its natural habitat… Unless it is a native, non-exotic mammal, hitherto unknown.

The are no known carnivorous apes in South America.  This specimen appears to be something never known to be in that region. Amazing how we keep coming across these things, like the new apes found in Congo who eat jaguars.  Whether it would prove to be a giant when fully grown, one has no way of knowing.  In fact, it's hard to find out what the results were of testing - another problem with handing things over to "officials."  But, it certainly does make one realize how a whole type of hominid could hide out even today in places where once there were plenty of ancient giants.

Source:  In 1956 geologist Audio L. Pitch, while walking on the Argentinean side of the Andes, found footprints 17 inches long (about 42 cms) at a height of about 6000 feet (2000 metres). Some reports say 16000 feet (5333 metres), which sounds a bit high up.  In 1957 similar tracks were reported in the province of La Salta, Argentina. The same year residents of Tolor Grande told journalists about a nightly chorus of eerie sounds like calls of an animal, emanating from the near by Curu-Curu Mountains. The cries were attributed by the locals to the Ukumar-zupai and the community remained frightened for some time afterwards. Anthropologist Pablo Latapi Ortega wrote that traditional stories of these giant ape-like creatures continue to be told today.  In May 1958 a group of campers in Rengo, 50 miles from Santiago, Chile, reported that they saw an apeman. Police were called and they took statements from the witnesses.  Carlos Manuel Soto gave this statement to the police: “I saw an enormous man covered with hairs in the Cordilleras."

An anonymous person on one site said this; We were sent to South Brazil to protect an archeology excavation. My unit were camped up north of Argentina so we were picked up and taken there. Do not ask me why they couldn't use the Brazilian military for this, because I do not know. Brazilian and Argentinian soldiers were guarding this place while people were taking up bone after bone while the archeologists were all arrested and taken to jail because apparently they didn't have a warrant to be excavating there. I was not there while they were arrested but a soldier told us that happened a week ago. No one could get near to see the big hole with fossils, but there were soldiers laughing about how big that guy must had been and "can you imagine his d*ck?" kind of talk and the rumor with the soldiers was that they were giant human skeletons. I didn't believe it until I saw this really big bone being carried out in the open in the back of a truck. It looked like a leg or something. But it was huge. I didn't get it. I couldn't sleep for a week when I saw that giant bone. They kept insisting that they saw the skull and it was huge. I never found anything else on the matter on the Internet. It was 15 years ago. I realize no one talks about this because they probably don't speak English but I am posting here because I see that people are very smart when it comes to sci-fi super natural things. If anyone has any idea what this was please answer back, thank you.


Strangely, Argentina does not seem to provide any ancient giant skeleton finds that can be found in reports. This is highly suspicious given the fact that the Patagonian giants and tall tribes were found in Argentina and down on the seafaring tip of the ocean, it was easily a popular stopping point for the giants.

- Evolution of the Giants -

Over 10,000 or 20,000 years, nothing would change in appearance for the giants. Like we homo sapiens, 40,000 or 50,000 years does nil that is noticeable. We don't know a great deal about the details of their actual appearance other than legends carried down and the bones that have been found.  We certainly have a  giant wandering our wilderness that fits that description today so far as the sloping skull, height, and powerful jaw go.  Are these beings we call Yowie, Bigfoot, and Yeren ancient giants in hiding? Well, consider this - the locations in America perfectly line up with ancient giants' stomping grounds, Yowi and Yeren - in popular giant territory.  Still, we possess no reports of the ancient giants being hair covered, though it's hard to tell that from a skeleton.

For you enjoyment, MST3000 did a fantastic spoof of the most sexy and campy 1960s film "Village of the Giants"