Did Giants and Native Americans Trade and Interbreed? 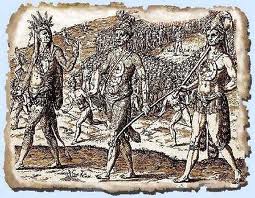 When I was doing the research for my post about the slope-headed skull found in Nevada, I came across a term coined by an aracheologist named Neumann who categorized skull shapes. He called the Karankawa Indians of Coastal Texas "Otamids" of a type that he referred to as the "first migration" people of the United States (as opposed to Native Americans who were the "second migration").

The skulls of the Karankawa Indians (who were very tall in stature), were unusual and reminiscent of what they considered to be some "relic primitive man." We are not talking about craniosynostosis - a condition of mal-fusing of the skull bones. We are talking about a genetically predetermined shape to the skulls of the people that is across the board in their population. (Article to read about Otamids) 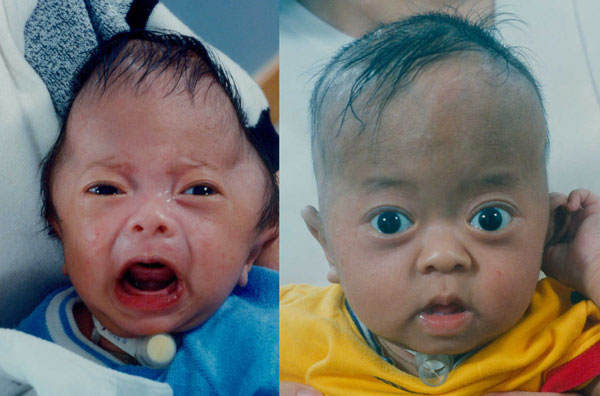 The giant skull found near Lovelock Cave during an excavation in the 1960s (the subject of this post I wrote), was categorized as an Otamid; slope-shaped forehead, occipital bone or os inca bone making the rear of the head pointed, pronounced brow ridge, powerful jaw, and many other features that coincide with the native people of Coastal Texas. This would lend itself to the conclusion that the two were related; ancient giants and Karankawa Indians. 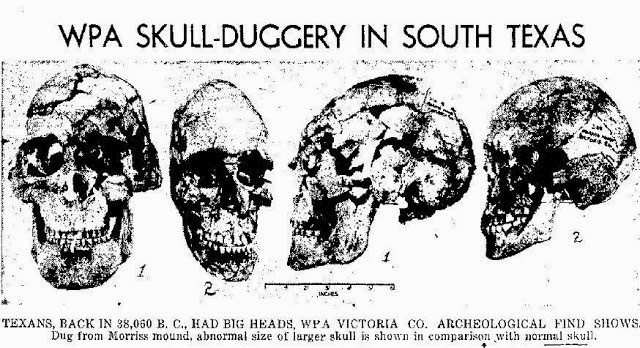 Much was said by 1500s Conquistadors who trekked from Florida through Texas and encountered tall powerful warriors in the Florida and Texas tribes both.

"...they gave us a a big rattle of copper which represented a face, and which they held in great esteem. They said it had been obtained from some of their neighbors. Upon asking whence it had come, they claim to have brought it from the north, of which there was much of it and highly prized."

Copper that came from the north where there was much of it and highly prized? That would go to the obvious source of copper to the north of Texas - Michigan; the land of the copper mining giants who consequently were buried with shell ornamental garments, shells not of their region, even shells from the Gulf Coast area, a most prized decoration.

Note: In latter years, no doubt, the local Natives who worked alongside the giants, worked copper as well and traded with this tribe after the giants were gone, but what was the tribe's relationship with the giants long ago? Might it show in their height and unusual skull shape that they interbred at some point in their trade?

In fact, if there were cultures that bound their heads, did they do so to look more like the advanced race of giants? This is akin to a woman dying her hair blond to look Nordic. Tribes who did bind their heads might have done so to look as if they were like the Karankawa, ones who did breed with the giants and congenitally had these shaped heads?  There are characteristics to the Otamid skulls that cannot be recreated with binding, but we do know some later cultures did bind. Why?

You know my answer - let's think THIS world first, not alien. 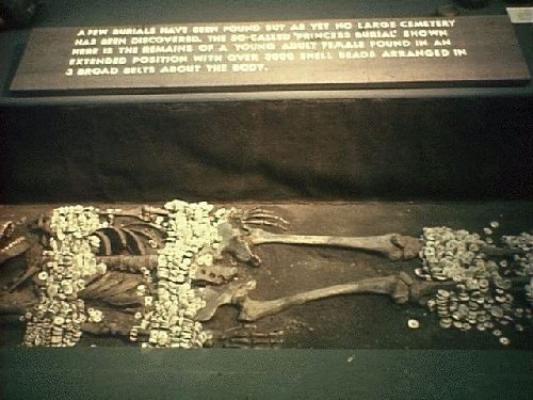 But, what if trading with local tribes was not the only thing going on? What if mates were hooked up on these occasions and tribes of Florida and Texas were able to breed a powerful race of people that utilized the large hunting weapons of their tall trading friends to the north?

Alvar Nunez Cabeza de Vaca (1528-1536) said to be the accounts of the first white man to traverse the United States from Florida to California.  Page 30:  "On the second day, however, we reached a lake very difficult to cross, the water reaching to the chest, and there were a great many fallen trees.  Once in the middle of it, a number of Indians assailed us from behind the trees that concealed them from our sight, while others were on fallen trees, and they began to shower arrows upon us, so that many men and horses were wounded, and before they could get out of the lagune, our guide was captured by them. After we had got out, they pressed us very hard, intending to cut us off, for they would hide in the lake and from there wound both men and horses. So the Governor ordered the horsemen to dismount and attack on foot, and our people attacked them. Again, they fled to a lagune, and we succeeded in holding the trail. In this fight, some of our people were wounded, in spite of their good armor. There were men that day who swore they had seen two oak trees, each as thick as the calf of a leg, shot through and through by arrows, which is not surprising if we consider the force and dexterity with which they shoot that had penetrated the base of a poplar tree for a foot and a half in length. All the many Indians from Florida we saw were archers, and being very tall and naked, at distance they appeared giants. These people are wonderfully built, very gaunt and great strength and agility. Their bows are as thick as an arm, from 11 to 12 palm spans long, shooting an arrow at 200 paces with unerring aim."

Conquistadors in Texas coastal area - "to this island, we gave the name of Island Of Ill Fate. The people on it are tall, and well formed; they have no other weapons than bows and arrows with which they are most dextrous. The men have one of their nipples perforated from side to side and sometimes both; through this hole is thrust a reed as long as two and a half hands and as thick as two fingers.

Giants did metal work in Michigan, Ohio Valley settling on confluences of Mississippi and other rivers. Did trading with southern Indians of Gulf area - seashells for copper and perhaps interbreeding so tribes could have powerful leaders.

Many of the Karankawa warriors were over 6 feet tall. People were shorter back then and 6 foot tall Indians were really big. They had bows almost as tall as they were and shot long arrows made from slender shoots of cane. It is said they would suddenly show up in their canoes, seemingly out of no where, to attack. They would run away and retreat or escape the same way. They would go into the swamps and swampy woods were Europeans had a hard time following. There was a good reason why they were such good fighters and why they were so unfriendly to American settlers.


Contemporary records describe the paramount chief as being very tall and well built, with some of the chroniclers saying Tuaskaloosa stood a foot and a half taller than the Spaniards. His name, derived from the western Muskogean language elements taska and losa, means "Black Warrior".

"Tuskaloosa's appearance was full of dignity, he was tall of person, muscular, lean, and symmetrical. He was the suzerain of many territories and of numerous people, being equally feared by his vassals and the neighboring nations."

NOTE:  As long ago as 10,000 B.C., Native Americans lived in the Red Hills of Tallahassee where they constructed temple mounds on the shores of what is now Lake Jackson (six of the mounds are preserved at Lake Jackson Mounds State Archaeological Site). Prior to the coming of the Europeans, Tallahassee had gained importance as a village of more than 30,000 people. The Apalachee tribes, who lived there from about 500 B.C. through the 1600s, were farmers. They developed impressive works of pottery, which were traded as far away as the Great Lakes.

Clovis tool technology found in New Mexico and believed to be the oldest form of technology in America, has some interesting attributes according to this professional paper ("Overview Of Paleoindian Taxonomy and Migration Hypotheses" by Mario Pichardo) "Clovis reveals a rapid jump in technology and tool kits as man headed south. Clovis may have come from earlier Sandia points at the Lucy Site in New Mexico (Wormington 1957)."

We can conclude that, as paleo-indians moved throughout the US and headed to the southern part where the ice age had retreated, they came across a culture that had bigger and better tools which made a "leap" in their technology just like, say, Guatemala (or other country) got the car from the US and went "we must have more of these - they make life easier!"

It is also in human nature to imitate those we consider superior, whether it's the head cheerleader in school, our boss, or a country who is more successful, utilizing their customs and culture such as fashion from Italy and wines from France. This has always been the way, including dyeing one's hair, piercing one's ears, and other fashioning to appear like the "superior" or "ideal." This gives us a clue of the relationship between the paleo-indians arriving here long before the Natives the Conquistadors found in the 1500s.

Here is our proof that the Natives did trade with the north, as they said themselves they did, but what people in the north did they originally trade with who might have influenced their pottery, their farming and their mound building?  We know that shells from the Gulf were found in the mounds of the Ohio Valley and Midwest. Trading was going on north and south and as we have plenty of reports of slope-headed skulls and unusually sized skeletons at the mounds - we can assume the original civilizations of the United States were very likely the giant race who influenced the Paleo-Indians would would move into the country and develop their tribes around the nation and adopt the skills and often the lands (after warring) of the giants, which is part of their own tribal legends.

Accounts given by Lenni Lenape and Pauites of running off giants or killing them would be supported by the concept that some of these tribes had unusually tall members. Even the Lenni Lenape from the west say in their legends that a volcano drove them east to find good lands and the Lenape were reported to be taller than average and stronger than average - supporting that in the west they might have traded and interbred with giants, as well.

So, is it possible that Native tribes were accustomed to trading with, dealing with, and perhaps even interbreeding with the giants upon occasion in the distant past?

Unfortunately, the Karankawa fell to extinction due to disease brought by Europeans and other factors in their shrinking territory. The blood line of these people might be lost forever, but they did teach us a very important clue that I will discuss tomorrow on the blog - why Sasquatch might go to such lengths to remain hidden.

Also, expect me to explore the question - are the giants still afoot in America?
at 2:00:00 AM