On the Road: Ghost Hunting! 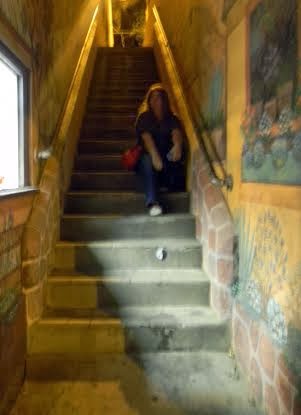 Bisbee is chock full of ghosts. In fact, I think that it's one of the most haunted towns I've come across in Arizona, along with Jerome and Globe.  Incidentally, all three are mining towns.

Julie and I investigated a stairwell just up the hill from the Bisbee Grand Hotel. We had seen a rather intriguing photo captured there by someone who said he was standing there waiting and he had this strange sense to turn and when he saw the staircase, he felt the need to photograph it and he got something very unusual - weird lights, odd looking shape.

Julie and I went to test it, but as soon as I stood at the bottom of the stairs, I had a sense of a female wanting to come down but cautious. I got all this information in my head at once that spirits access the stairs often, but not when people use it. She wasn't sure if we were going to go away or not. I stepped up and whispered, "come on down, it's okay, come on." I went and sat on the stairs while Julie photographed me and at one point, I felt someone step beside me and a hand on my head - the scalp tingles were intense!

We both when photographing the stairwell saw shapes on our screen that did not show up in the photos. Another example of how cameras can be impotent at capturing things. I was seeing the shape with my eyes and not even looking at the camera screen. Julie got the scalp tingles as well, a sure sign of physical contact or exceedingly close contact, kind of like the prickles when lightning strikes nearby.

Our first night in the Copper Queen room 312, it was fairly uneventful except the occasional whispering voice or sound of footsteps in the room. It was the usual things you might hear in an unfamiliar environment.

The second night, however, we decided the room was used to us and the hotel was nearly empty. I picked up Dale the Doll from the floor where he had been staring across the room at us and put him on the sofa and stuffed his hat over his face so I didn't have to look at that creepy sight. Julie asked about him as a target object, and I doubted anyone would want to touch him and that I put the hat over his face. She chuckled.

The floor was quiet. In fact, we didn't run into anyone on our floor. So, we sat down to a little pendulum session. I asked questions and a little boy was the apparent unseen guest.


When we finished this enlightening session, I did a little EVP work and then decided to use my divining rods to try and locate Billy. As soon as I got near and my skin got prickly and the rods began to cross, it was like he would dart away in glee, happy that I couldn't find him. I chased this around the room for a time and then said I had enough. I gave him a closing bit of advice and we ended our session.

I went into the bathroom and when I turned around and looked into the room, I saw Dale the Doll on the sofa. Only, his hat was not on. I was shocked. I stood there staring at this face, mouth hanging open. I rushed over to look and saw his hat nowhere.


The hat was underneath Dale and fully underneath, only the brim stuck out. How is this possible? I know people think of ghosts as invisible people, but that is not the way it works. There was not a Casper lifting the doll up and placing the hat beneath. More than likely the manipulation of the hat involved sliding it down, and being worked beneath him. Thus, we did not hear this happening.

It seemed the evening was over. We went to bed. I always have the sheets pulled from the bed because I hate to be pinned down. I also sleep hot, so I shoved the comforter to the other side of the bed. I went to sleep and when I awakened around pre-dawn time, my body was wrapped in the comforter like a mummy. It was pulled over me, tucking my legs tight together, then my hips, and my arms were at my sides, the comforter tucked beneath them and my shoulders. It freaked me out at first because I hate to be pinned. I lifted my head and was shocked to see how very neatly this was done. There is no way in any stretch of the imagination I could tuck my legs, hips, straight arms, and shoulders in myself. I kicked myself free and shoved it aside, got up, paced around a bit, got a drink of water, went back to bed and whispered, "Billy, I hate blankets!"

When I woke up after dawn, everything was back to normal. The feeling of someone in the room was gone.  Julie and I reviewed the previous night and it's oddities. I check on Dale. He was back to normal as I left him before we went to sleep. Other trigger objects around the room were in place.

The room was sunny and felt utterly empty. Having grown up in a very active haunted home, I know the feeling of others in the vicinity. I had that feeling almost the entire time we had the room until that next morning. It was oddly sterile.

I have had strange experiences each time I've stayed at Copper Queen and it is my favorite place to stay in Bisbee.  I highly recommend it!

Later today, Dale the Doll will give his version of ghost hunting here on the blog. Hmm....