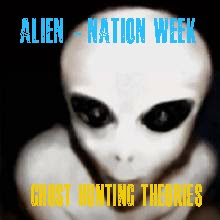 Aliens. We think we know what they are, little grey men, sometimes described as lizard people, and yet other times Nordics. But, do we really know WHAT they are?

Collective hysteria/imaginings
If you ask the government, they'd likely tell you that as a society we have become believers in aliens because of Hollywood and hysteria, there are plenty of concepts that support this hypothesis. The majority of encounters with aliens happen in bed - a time when sleep paralysis, shifting dream states, and even vivid dreaming because of geomagnetic storms could be at play. It's been easy to blame this on imaginings, but those who have experienced encounters will tell you just how real they are.

Visitors from another planet
48% of Americans believe aliens come from other planets. It is interesting to note the similarities in experiences and descriptions of the aliens and that some people don't recall it until under hypnosis (as in my case).  There is definitely enough witness content to support the concept that aliens exist, but are they from other planets? Well, many would not claim them from our own planet, so the likely other concept is - true alien to our world. The 1950s scifi movies certainly had a field day with such concepts of little green men and long-distance travels, but more practical citizens see this option as preoposterous, given the amount of light years to travel while science-minded folks point to concepts like wormholes. Another popular concept is USOs, or unidentified submerged objects, pointing to the conclusion that these aliens stay on the bottom of the ocean and fly out to do their deeds and go back. Until it is time for them to leave our planet, they have a base of operations that is safely hidden.

People from our planet's future
There is a good deal of conjecture that in the future, man will evolve into a different form because of less need for muscle - more reliance on machines, and larger brain to handle growing technology and its applications. When UFOs arrive, some of the population has come to accept this is extraordinary technology, but they are skeptical it came from light years away. The only possible explanation that, to many makes more sense, is that they are visitors from our future. In other words, we are their ancestors and they are our descendents.

Other dimensional/parallel world
Shadow people, aliens, cryptids are believed to be other dimensional or parallel world occupants who can cross back and forth between the worlds. Why are they able to do this? Well, let's look at it this way: We are a physical form that houses a soul. We can go into that spiritual world in prayer, astral projection, meditation and other means. We are still in our physical form, but we have entered another realm in our mind/soul. What if these beings are soul forms that can house a body? They must concentrate to produce a physical form as we focus on a mantra to enter the spirit realm. Indeed, the concept of something not of this world visiting us, seems much more feasible if you make them from the same space, just another dimension.

What are aliens? They are beings that are seen and experienced by many of our citizens who are forever changed by the experience. Whether these experiences are real or imagined is yet to be proven, but the results are very real, concern, fear, wonder, amazement and outright terror.