We go to extraordinary means to explain Bigfoot because other options can't explain why we aren't running into them. After all, they are huge, they must eat a lot, they must be breeding, and living in the woods, yet they manage to keep eluding us. They must use a portal or some kind of interdimensional travel, right?

Actually, a much more simple and feasible explanation is psychic skills. We may scoff at such abilities, but it is an unavoidable skill that some humans have developed and display. 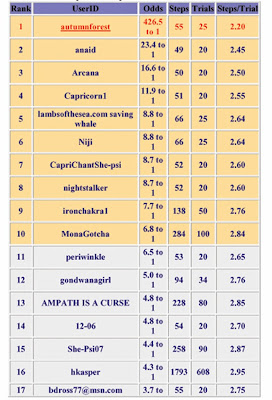 It is entirely possible that Bigfoot has developed that part of his brain as a prerequisite to surviving in the woods or perhaps he chose to hide in the woods because he already had the evolved skill (as part of his brain's evolution) and this was the ideal way to hide from the hairless ones and their motives. If you knew when and where someone was entering the woods, do you think you could evade them? Exactly.

I have heard reports from habituators and those who have encountered Bigfoot in the woods and on their properties, that sometimes, it seems as if the Tall Ones can anticipate needs. The person thinks "I wish he'd do this" and then - voila! If you had access easily to those thinking about you, wouldn't you know where to hide if you didn't want to encounter the hairless ones?  If you wanted to have interactions, but needed to know if the hairless one is trustworthy, wouldn't this skill make it possible to decide who gets to see you and who doesn't?

Some might take this notion a step further and ask, "what if they can manipulate our times? Make us forget we saw them, guide us to decide to walk in a different area, confuse us so we forget what we were about to do?" These things have been reported in the woods, wandering and "coming to" to realize you have no idea where you were going or why. Some people report inability to step further. I've had this happen one time in a squatch-dense area. I went to the edge of the clearing, looked into the trees, knew something right ahead of me was watching me, but I could not step forward. It was the oddest thing, especially from someone who is fearless when it comes to potential encounters with the Tall Ones. I literally could not seem to get my brain to tell my legs to move. An invisible wall was formed.

It also might be quite possible that Bigfoots, like us hairless ones, tend to have some who are more powerfully inclined in the psychic realm. These members of their clan might become healers or shaman.

As well, another possibility is that, because they are very sensitive, they seek to remain away from other "brain chatter." Lots of psychics say this, they hate crowds, places with dark histories, and the like. They are overwhelmed by incoming stimuli.  This would explain a very withdrawn lifestyle, as well as not living in large groups, and being able to know where we are so they can avoid us.

It probably goes without saying that, because of the way Bigfoot is so efficient at avoiding us, They have developed some amazingly intuitive skills.  How far that intuition goes is still up for debate, but if they could be a divergent for of man, they might have evolved in lots of other brain functions that we are weak in, as well as growing exceedingly tall, strong, and hair covered. Together, our weaker hairless bodies might be well balanced by their strength and robust health, and our technical and analytical minds might be balanced by their intuitive and spiritual ones. In fact, if we could mate a human and Bigfoot, we might very well have the ideal human.

And, that makes one wonder about the government's potential interest.