on November 26, 2013
We have debated since 1967 the credibility of the Patterson-Gimlin's "Patty." We elucidate more and more information over time from experts like MK Davis who was the first to stabilize the original film and has continued to give us clearer and clearer images over time.


We are so distracted by the hair on Patty, that people often scoff, "this is a walking ape, yeah, right!" But, if we whittle away the hairiness of this female, we discern some very human features. In fact, we often say Bigfoot has a "no-neck" look but this is the effect created by the fact they have hairiness and long hair - it completely swallows up the neck region to give no definition or curve. 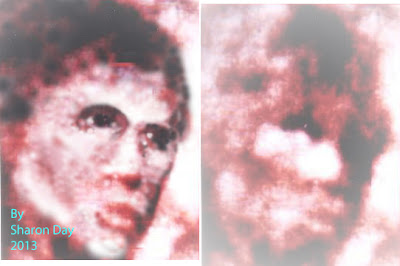 With my limited Photoshop skills, I shaved away the hair to expose structure beneath and get a perspective on her looks without the distraction. 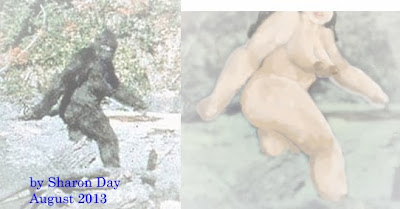 (utilized a pale skin color to show the musculature and details, but actual skin color is questionable)

I also did it with her body to see what kind of flesh is beneath. When we remove the hair, we realize she's all woman, powerful woman. This is a breed of human that has enormous power. Perhaps her hair follicles are overactive compared to us, but beneath are very human characteristics, though perhaps she has something subtle that is different but significant - proportions.

If we look at her proportions, they are odd. There is something just off that makes costuming infeasible. She looks like a human, walks like a human, but there is something different about the length of certain portions of her, especially her spinal length.  When you look at Patty, the height from her crotch to ground is almost exactly 1/3 of her total height. If you do this with a human - (me on the left),  there is something quite off. I am 68 inches tall (5'8"). If I had her proportions, I would be 96" tall (8')!!

You wonder why Bigfoot is so tall - perhaps we need to look at spinal growth. If they have a dominant gene or a brain structure that affects the growth phase, hairiness, and the growth plates in the bones so that they have a protracted adolescence, the effects of what hormonally drives us to grow would be vastly different. Hormones like steroids would help to build muscle, other pituitary gland hormones for height could be affected, and sex hormones that create hairiness could be different too. If we have a human who has a longer adolescence, more exposure to the hormonal phases, we get a taller, stronger, hairier human. The question is - if Bigfoot are across the board tall and hairy - this is either a dominant trait or they simply evolved to have different brain structure in this branch of the man family. 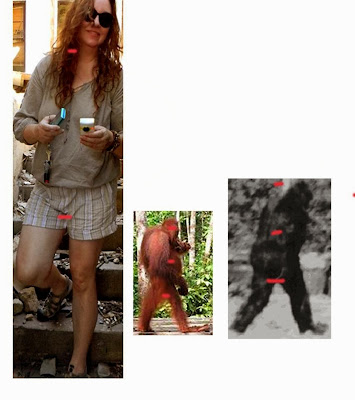 For the decades I saw this film replayed, I always scoffed. Too convenient that someone went looking for Bigfoot, found one, filmed it just strolling along as his horse reared and there were men and horses and guns in the vicinity. That film was never shown before the famous clip or what was taken after the famous clip seemed highly suspicious too.

It wasn't until I saw a Bigfoot myself that I began to ponder the film again. It looked nearly identical to the one I saw, perhaps the one I saw was a bit more slender, but the gait, the proportions - they were all there and just "off" enough that it didn't seem like I was seeing a hiker in a fur suit.

Why would Patty just stride across the clearing? There's a thousand reasons why but as a mother, the only one I can think of would be to protect her young, to distract. It says a great deal about this human cousin if they would rather be a target than go on the offensive.  I cannot prove either the validity of Patterson and Gimlin and their intentions when taking the film, but I can give some insight into the subject.

The use of a female, the gait which keeps her head level, the wide hips, the enormous muscles, the odd proportions - they are classic. And, as MK Davis has so masterfully delineated clearer images, we can see the swing of her hair and details that were never noticed before. When an image can stand up to that scrutiny over the decades and advancements in film enhancement and graphics, it is worthy of our serious consideration.