LAUGH: Flushing Out the Squatch 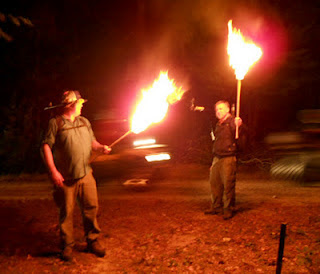 Another in my LAUGH series involving my favorite show, "Finding Bigfoot."

Today, we find the F'ing Bigfoot team about to tackle woods that look totally squatchy. Having tried a fake deer, torches, fireworks, mannequins, doughnuts and a crying baby doll, the team lead by Matt Moneymaker decides they are ready to flush that stubborn squatch from the woods.

***If this episode reminds you of roadrunner cartoons, it's simply NOT coincidental.**

Bobo: (chuckles as he continues to rub peanut butter all over a deer on a leash) Ask the Boss Man.

Matt: You see, Cliff, we're going to try a new technique I'm responsible for inventing. We're going to make this deer smell real inviting and then place this camera on its head (hands camera to Bobo who fastens the strap around the deer's head). Then, we'll release the deer into the woods where SAH-squatches will chase it down and we'll get them on film. I plan on patenting this one. I call it "Deer Vision."

Ranae: This is utterly ridiculous. The poor deer!

Matt: Okay, Bobo, set the deer free. With that nightvision camera on her head, we'll be able to see just what the deer is seeing.

(Bobo releases the deer from the leash and it goes into the dark woods.)

Ranae: (huddles with the team around the monitor). I have to admit there is some merit in the idea of having a camera on a creature in the forest. If squatches exist, they are not scared of them like humans. From a scientific point of view, I can appreciate that.

Matt:  Look at that! You can see the trees and the bushes and... (squints)

Cliff: (Leans over the monitor) That looks like an erect creature standing on two feet. We can only surmise that Bigfoot and bears are the only thing that can do that and this thing isn't shaped like a bear. I-think-we-have-a-squatch!

Ranae: Is that a hat? Wait a minute (turns) Guys, the deer is back, it's staring at Bobo.

Bobo:  Shoo! Go back to the woods little deer! (The deer comes over and stares up at Bobo) Oh, come on, scat! (gestures hopelessly as the deer stands there gazing up at him)

Matt: Did you hear someone speaking?

Cliff: Ah, Matt, it's Ranae. The female on the team. You know, the skeptic?

Matt: She's still with us? I thought we lost her in Canada. Damn that Todd Standing and his offers to use her as squatch bait! I knew he'd go back on his promise.

Ranae: (sighs with exasperation) So, what's next?

Cliff: (elbows Matt in the ribs when he ignores Ranae) Ranae asked what we're doing next.

Matt: I have invented a new technique no one has ever used. I call it "Tempting Projectiles." I've saved my shit for an entire week and I'll put a pile of it in the woods, set BoBo up as a human target and the apes will not be able to resist throwing it at him.

Ranae: (laughs) I think Bobo is saying he takes enough of your shit, he doesn't need more, Moneymaker.

Cliff: Maybe we should call it a night. It's not feeling very squatchy.

Matt: (rubs his face, sweating, twitching) Look, I've had enough! This show is called "Finding Bigfoot" and we're not leaving these woods until he is in our hands. Do you understand? I think you're all fucked in the head. We're ten hours from the sunrise and you want to bail out. Well I'll tell you something. This is no longer a show. It's a quest. It's a quest for fun. I'm gonna have fun and you're gonna have fun. We're all gonna have so much fucking fun we'll need plastic surgery to remove our goddamn smiles. You'll be whistling 'Zippity-Doo-Dah' out of you're assholes! I gotta be crazy! I'm on a pilgrimage to see a SAH-squatch. Praise Bigfoot! Holy Shit!

Bobo: (frowns and scratches his head) Hey, didn't Chevy Chase say something like that in "National Lampoon's Vacation"?

Ranae: (takes Bobo and Cliff aside) Guys, I'm really worried about Matt. He seems to have gone over the deep end.

Bobo: How can you tell the difference?

Cliff:  (whispers) You know, I had to explain to him three times last week that just because the show is called "Finding Bigfoot" does not mean that we have to literally find Bigfoot and bring him in. He seems to think it's in our contract.

Ranae: (rolls her eyes) What is he doing now? You know, we all need to keep an eye on him. We don't know what he's going to do next.

Matt:  I've set up these mannequins standing around. I'll spread some broken Christmas bulbs around the forest floor and grease up the trees. I've also attached these paint buckets on a rope to swing down. The SAH-squatches will think we have company and if they try to get closer--we'll catch them with all these cool things I rigged around us. This is another invention by me. I get all the credit. I call it the "Home Alone" method.

Cliff: (under his breath) Someone's been watching too many movies.

Bobo: Well, I don't know about y'all, but if he pulls out "Deliverance," for ideas, I'm definitely skeedattlin'.

Cliff: Yeah, I draw the line with pulling a "Harry and the Henderson's" hit-and-run.

Matt: Okay, everyone, now that we have this set up, we're going to run another experiment. Here, the female should wear this. (hands Ranae a piece of red fabric) I call this one "Little Red Riding Hood" (hands her a basket) You just put this on, carry the basket full of bananas through the woods and you are sure to attract a SAH-squatch.

Ranae: The female has a name. It's Ranae. (tosses the cape in his face) And she does not do fairy tales.

Matt: (snarls) I thought this would be the case...dealing with females (storms over to a blanket and pulls it back to expose what's underneath it).

Cliff: (steps back cautiously) Is that a rocket?

Ranae: (voice raises and she steps back cautiously) Does that say "Acme" on the side?

Bobo: (steps back cautiously) Hey, isn't that in the Roadrunner cartoons?

Matt: (throws back his head, eyes glowing strangely and lets out a maniacal laugh. He reaches to light the fuse as the team runs away) Take that, you dumb SAH-squatch! (he laughs as the fuse burns its way up to the rocket. Just when it's about to launch, the light fizzles out and Matt comes closer to have a look when the rocket ignites and fills his face with black smoke, singes of his eyebrows, and makes him cough)

And somewhere nearby in the woods, a Sasquatch calls out "Beep! Beep!"