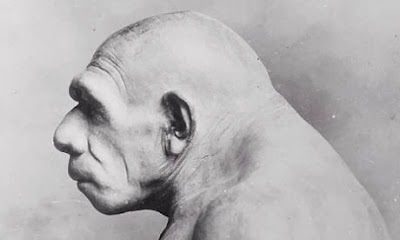 Homo Sapien:  Have the smallest brows of any known hominid, and have a flat face with a protruding chin.

It seemed that there was a natural process whereby a kid who was strongly built, tended to pursue athletics and one who was weaker or perhaps more sickly, developed his mind. There was a process of natural selection and evolution in accelerated form that created the cliques we knew in high school.

Perhaps it was in the earlier times of man when Neanderthal and Homo Sapiens walked the earth. We know Neanderthal was a powerful guy with a strong immune system. Might those attributes been evolved over time to produce a tall, powerful, resilient, but shy race due to lack of mental facilities to feel superior. Could that be the being we now call Bigfoot? A human who did not develop the intellect, but perhaps developed the mastery of the woodlands and living in the wild to an extreme talent that was ideal for his forceful agile nature? This would be akin to the jock having issues with math because he knows how to strategize on the field and tackle, but not finding use in equations.

Might the cranial capacity of homo sapiens and their not as powerful bodies make them desire to develop technology to make them stronger with tools that could compensate for their lack of brawn? Would they find that the use of their minds to develop bigger and better traps for catching kill would help them eat even though they couldn't keep up with racing antelope? Might that mind have made him capable of bringing the food to them by way of agriculture and ranching? Would catching one of those ancient beasts be as foreign to him as a nerd winning a marathon?

And, could this all have led us to this interesting crossroads today with modern man living in buildings, driving cars, and talking on cell phones versus a robust powerful and adept survivor of the woodlands?

"Revenge of the nerds, their time has come!"