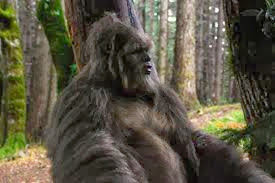 Whether we want to accept it or not, there are only two ways we can take the subject of Bigfoot; either they are the world's most exceptionally shy and elusive tribe or Bigfoot is a hoax perpetuated by thousands of people and continued today for reasons that are unclear.

Talk about a world of insanity?

No wonder Bigfootery has attracted everyone from charlatans and thieves, opportunists and killers to philosophers and intellects, artists to weekend archaeologists.

Did you ever hear the phrase, "you can't be sorta pregnant?" Bigfoot either does or does not exist.

Given those two options, we can make only two conclusions; exceptional skills that exceed our own crafty ones or has never existed but is a mass urban legend chased by well meaning believers of the Cult of Bigfoot.

If Bigfoot is the most elusive of man's family, how does he do it with our population growth, dwindling wildlife, and so many meatheads rushing in to try and capture them on camera? We can assume a few things about what works to Bigfoot's advantage:

1. Bigfoot was born and raised in a wild place and taught by elders to survive it.
2. Bigfoot is hard to run into. Some folks look their whole lives.
3. Bigfoot has an obviously purposeful directive to avoid us at all costs.
4. Bigfoot must have skills of pre-knowledge of where to go and when to go and how to hide if someone comes across them.
5. Bigfoot is difficult to photograph.
6. Bigfoot is efficient at gathering calories, sleeping, breeding, and all of this without detection by those of us who wander their woodlands.
7. For all our equipment, desire and knowledge, we can't seem to out-strategize them.

Our military men are trained to live commando style in places like forests and jungles, to blend in, to be still, to note changes in the forest to know of incoming outsiders. But, they don't necessarily live there, raise children then, find food in the wild, or other daily activities of Bigfoot. For a being that is sometimes nearly twice our size, has caloric needs, breeding, sleeping, sickness and death - they certainly don't seem to have much in the way of vulnerable moments.

It would seem that, if one is to assume Bigfoot exists, this is the biggest scale universal covert operation of all time - from Orang Pendek in Indonesia to Yowie in Australia, from Yeti in Tibet to Bigfoot in North America. Somehow, they all have remained other and hidden, with a huge priority to not be found. Yet, how do they all decide upon this directive and coordinate it en masse?

Has anything of this scale ever occurred in anthropological archives? We know that pockets of random unknown Amazonian tribes have been stumbled upon, even in these modern times, but never a group of this population, worldwide, all opting to remain remote.

What makes tribes become remote?  It would seem that they set up a village in a very remote area, and grow generations who learn from the elders and, with no one venturing into their region, they remain isolated. In times of distress, needing food or water, or a natural disaster occurring, they move and that is where they might run into modern man.

I believe the same is the likely scenario for finding Bigfoot, however, in the case of Bigfoot, he is not necessarily living in areas where hairless man does not enter - he is living in those places, in spite of our coming and going, so it is not his location that is remote, it is his attitude that is remote.


What remains extraordinary about Bigfoot's secrecy is their united desire to remain removed from the hairless ones and their baffling talents at remaining hidden.

In the case of Bigfoot being nothing more than urban legend perpetuated by desire, belief, wishful thinking and the like, this would mean that our population is either highly gullible or thousands of people are being duped by explainable forest creatures.

When you consider how deeply entrenched Bigfoot is in our culture, it's rather remarkable to think that we built teams of people searching the woods for them just on folklore. This would be like Ireland being overtaken by serious teams and TV shows in search of fairies and elves.

Taking away the "big business" of Bigfootery, the witness accounts of unexpected encounters ring true and jive with each other as an actual being that is found in the woods upon rare occasion when someone is "lucky" enough to stumble upon them. Witness accounts are a way that "tribes" pass on lessons and so when we listen to a witness speak of their encounter with Bigfoot, we see it as knowledge shared. It is in our very makeup as humans to yield to the elders.

As a witness myself, I KNOW they exist, but I cannot do a thing for the people who "believe" Bigfoot exists. Those people's momentum to go in search of and prove Bigfoot is unrelenting and creates a huge spotlight on the subject as film crews, cameras, and "hunters" rush the woods. Believers search for proof - it's in their nature to want to justify their stand on a subject. But, what kinds of evidence are believers building their hopes upon? They watch shows of people searching for Bigfoot, listen to witness accounts, read books, see movies and documentaries and anything they can get their hands on until the cumulative effective of all this "knowledge" is belief.

"It's overwhelming amounts of evidence," one person told me who had not seen one, but fervently believed. The problem with his statement was, when I broke down his "evidence" it involved documentaries and TV shows, what witnesses said, and even fictional movie portrayals that sway one to feel this is "fact" if movies are made based on it.

If Bigfoot is hard to capture clearly on video and photos, it would seem that there is something unusual afoot. Any other creature in the woods can be photographed and identified, even rare jaguars are caught by trap cams. Still, there is always the possibility that film such as Patterson-Gimlin and photographs and videos of varying quality, could be all hoaxed. Look at what spiritualists did with "ghost" evidence of ectoplasm, seances, table tipping and supposed ghost photography at the turn-of-the-20th-century. Of course, today we seem to have more blobsquatches than we know what to do with and a great deal of those are clearly misinterpreted or hoaxed, but that doesn't mean the baby goes out with the bathwater, a percentage of them are legitimately unexplained.

What would be the advantage of hoaxing or even lying about witnessing Bigfoot? Attention? Fame? Money? What would these massive amounts of witnesses have to benefit for saying they saw a Bigfoot or even staging a hoax? Since Bigfoot is an industry these days, it is not unusual. A good video on YouTube drawing ad revenue could do quite well. But, what of the witnesses that don't go seeking fame, fortune or public recognition? What about habituators who claim to be sharing land with the Tall Ones? And, what of the foot tracks all over the country - obviously not hoaxed by the same person, each quit individual in size and contour?

Well, as a community, man can do exceptional things. If a person grows up in a small town in the foothills of Appalachia and there are Christian churches and they are raised among other Christians and taken to church, their belief system is, by default, Christian. They don't question it. If a large group of our population believes Bigfoot exists and it is what we are taught, then, Bigfoot exists.

Either Bigfoot his perpetrating the largest scale most covert operation known to man or Bigfoot does not exist. Either option is an overwhelming shock.

There's really only one other explanation and it's just as overwhelming as the two proposed above, one that will twist your mind even further; Bigfoot exists, they just don't exist in the same form we do.