Update On My Cattle Mutilation Theory

on August 14, 2013
Recently, I posted this theory about cattle mutilations - 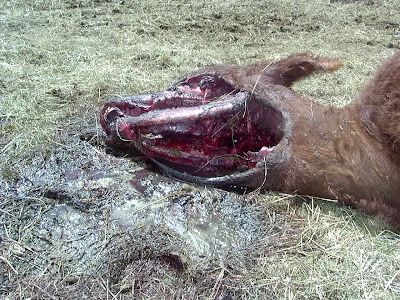 Ironically, a few weeks later, I was on my stock board reading an article someone posted having to do with our company we were invested in (Inovio). When I read it, I realized that my life was filled with not so coincidental things - here's the article and it does seem to reinforce for me this theory:


Since she was a young girl, Connie Schmaljohn knew she wanted a career that involved saving lives.

More than 30 years ago, she started down the professional path toward achieving that dream by becoming an Army research scientist and working on vaccines to prevent diseases not typically found in this country, but which afflict members of the military overseas.

Schmaljohn, now an internationally recognized expert on Hantaviruses and hemorrhagic fever with renal syndrome, uses molecular biology tools to develop and test vaccines for a range of viruses. She and the scientists in her lab use recombinant DNA, a form of artificial DNA, to take the genes out of potentially deadly viruses so they are no longer infectious.

“We like to call them next-gen vaccines,” said Schmaljohn, a senior research scientist for the U.S. Army Medical Research Institute of Infectious Diseases (USAMRIID) in Frederick, Md.
Research scientists at USAMRIID were among the first to use these DNA vaccines. “We’re always in the forefront of what the technological state of the art is and then we push it further,” Schmaljohn said.

Schmaljohn’s expertise enabled her and her colleagues to identify what was going on when the number of cases of Hantavirus Pulmonary Syndrome (HPS) exploded in the southwestern part of United States in the 1990s. Previously, the severe, sometimes fatal, respiratory illness due to Hantavirus infections was not known to cause disease in the Western hemisphere, and Hantaviruses had only been associated with kidney failure diseases in Asia and Europe.
But then HPS started felling people here.

“Because of the groundwork she had done, she was able to identify the outbreak in the Four Corners as Hantavirus,” said Jean Patterson, chairman of Virology and Immunology at the Texas Biomedical Research Institute in San Antonio, referring to a region comprising parts of Arizona, Colorado, New Mexico and Utah. “It was the first time it was identified in America.”

Historically, USAMRIID has blazed medical trails, since the military serves all over the world and comes into contact with viruses not found in the United States and therefore aren’t widely studied here, said Colleen Jonsson, director of the Center for Predictive Medicine for Biodefense and Emerging Infectious Diseases at the University of Louisville.

“They were the frontline for exotic pathogens predominantly because soldiers serve in many, many countries,” she said. After 9/11, the National Institutes of Health also started sponsoring research to study these agents, she added.

Schmaljohn’s work on dangerous pathogens may be aimed at protecting military personnel, but the benefits spill over into the civilian population, as the Hantavirus outbreak demonstrated.
Her lab works on two types of vaccines: those that protect against medical infectious diseases and those that defend against agents that could be used as weapons in biological warfare.

Researchers at USAMRIID were the first to start testing DNA vaccines for biodefense, using a method of delivering DNA vaccines with a short electrical burst. The first study of this electroporation method dispensed a vaccine to muscle in a clinical study at Walter Reed Army Medical Center with two vaccines for Hantaviruses.

The next study will deliver the vaccine to the skin instead of muscle, a less invasive, less painful method. Schmaljohn hopes the immune response will be even better.


FYI: I'm invested in this company (INO) that is doing the most innovative things in vaccines from HIV to cancer treatment, exotic diseases and universal flu vaccine. In the process of due diligence, we run into things sometimes that shock and amaze. This just verified for me the validity of my theory.

Serendipity:  Stumbling into information one did not intend to go out and seek but is fortuitous. That is my life - serendipity. One night, I went to bed, asking myself to wake up with a stock in mind to buy the next day. I woke up with INO in my head. I had traded it in the past, but didn't spend a lot of time on studying it presently. I looked it up again and found it had gone through trials and was getting some attention. I bought it cheap. Right away, news kept coming out about it and it was getting the spotlight. It also led me to this bit of information in my due diligence to verify a theory in the para-world. There are no coincidences.