Can We Create a Zombie? 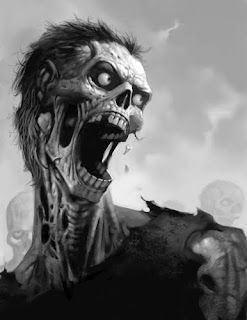 Come on, haven't you ever wondered if it's scientifically feasible?

In some magic-based practices, the process of making a zombie is taken as fact. With the right mix of ingredients, a person can ingest the concoction and go into a kind of stasis (think SciFi long-distance space travel). The body’s systems would shut down to almost a halt, maintaining just enough to keep and element of life present (yeah, like a glowing pilot light on a gas heater). There is no doubt this is possible. Every time we undergo anesthesia for a surgery, we are quieting down conscious brain function, but maintaining autonomic function so our hearts still beat and we still breathe. With anesthesia comes a dulling of pain senses and the creation of amnesia when it is over. Of course, this wouldn't make for a real zombie, just a dead-looking person. The zombie would supposedly occur when you reanimate the person. In the case of anesthesia or even primitive mixes of powders, it wouldn't make a zombie, it would make an awake person after deep sleep.

These logistics aside, the problem with creating a zombie is the basic knowledge that when you shut down body functions to the degree that breathing is not detectable, then not enough blood is reaching the brain. Even if you reanimate a person by say CPR means, if the person has been without oxygen for enough a period of time, the brain functions will not reengage. You will have anoxic brain injury (from lack of oxygen) and a vegetative state.