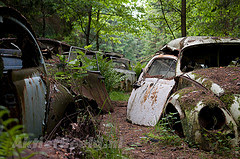 When I was a kid, we had a rusted out abandoned car from the 1940s in the field near our house. This big old behemoth had been pieced out by my brother and his buddies, parts strewn all over the field. I spent one ambitious summer working to figure out how the parts went back in and cleaning up the vines from the interior with fantasies of driving to the beach in California, while listening endlessly to "Beach Boys" songs the entire summer. Cars inspire independence, but like abandoned buildings, when left to the elements, they seem sadly stranded. And nature is not kind. 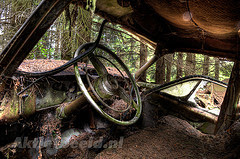 I didn't know my facial amnesia issue as a kid, but my mother must have thought I was a simple minded child. We would go to the mall and I would lose sight of her and grab the nearest woman's purse that looked like hers. In the 1960s, all purses looked like mom's! The woman would eventually feel me following her, hand on her purse to steer me along. My mother would find me and say, "Sherry, why didn't you just look up?" It wouldn't have mattered. To me, all the women looked the same. I hadn't yet found ways to compensate for lack of facial memory. So, when dad wanted to go to the junkyard - a place I found fascinating - he didn't realize what might happen. 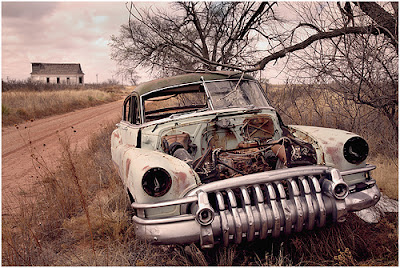 Twelve hours later, several policemen, and an entire junkyard crew later, one of the men working there found me in the backseat of a Cadillac, assuming it was ours and waiting for dad to come and take me home. I was all of 3 years old. I still remember it, though. I was hungry, thirsty and had taken a nap. I had wandered off to look at all the stacks of cool cars and lost him. I still to this day am fascinated with cars. They are like exoskeletons that transport you to cool places in style. And, when left to be neglected, they become fascinatingly sad and elderly appearing. 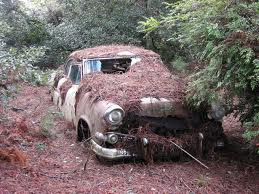 Imagine finding this car (above) in the woods. What was its story? How did it get there? Was it something nefarious? Stolen and parted out? Abandoned by a honeymooning couple who had to hike back to town only to be eaten by some phantom village monster? 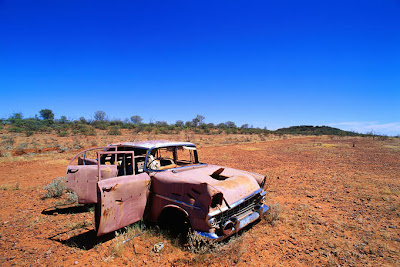 There's nothing like what the elements can do to a car, from heat and sun to rain and snow. The body rusts quickly. The paint fades. The metal frame makes a lengthy stand against the atrophy. 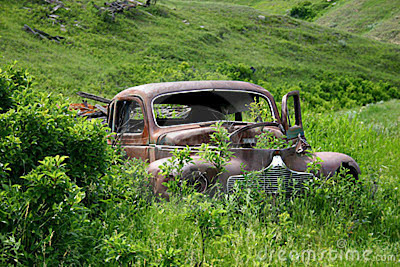 A car like this (above) could be a nice hideout for a raccoon in the rain or a nest for some vipers. Nature will claim it, even though much of it is non biodegradable. 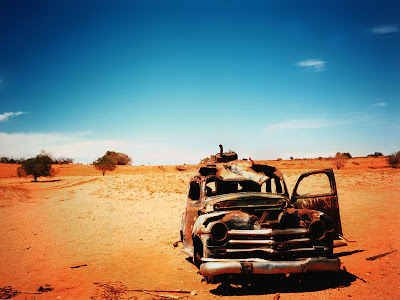 Every summer in the desert, this is how I feel (above). I can very much relate with this abandoned gem. I look at that frame and realize, in its day, it was a real beauty, but the sun has made it age as quickly as a Palm Beach widow.