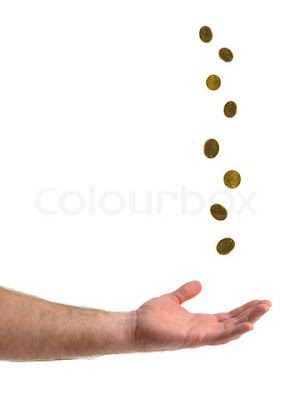 I am especially intrigued by the strangest behaviors by ghosts, such as poltergeist, shadow people, and one especially vexing playful activity - materializing coins.

When you read amazing accounts of active hauntings, you sometimes hear about falling coins that materialize from nowhere and confuse the observers. Barry Taff, the researcher best known for the Entity Case, reported such incidences, some of them quite extraordinary in amount and persistence. At a recent MUFON lecture I attended, two Navajo Nation speakers told of a haunted location where these coins not only materalized sometimes from 3 feet off the ground, hit the ground, sometimes rolling and bouncing, but always 65 out of 65 times, landing heads up.

Immediately, I can't help noticing the importance of coins to humans and the whimsy necessary to have them land heads up. It almost seems like a purposeful message. But, what is the message, and how does it manage to materialize something so substantial?

What is the meaning of raining coins?

The throwing of coins and rocks are often associated with poltergeist activity. Some believe it is because coins were placed on the eyes of the dead and others believe it's a common way for a ghost to say "hey, I'm here. I'm okay. I made it to the other side."

If we're going to play devil's advocate, here goes - coins are small, noisy, and have a personal importance to the living. Seems like an ideal item to manipulate. Conversely, for anyone wanting to hoax, pitching a coin makes noise and is easy to fish from your pocket and toss.  Still, this does not explain the appearance of coins dropping from ceilings and other unusual appearances. As someone who reads objects, I can tell you that coins are a metal that retains information amazingly well. Whether this is a factor in components that makes them easily manipulated by unseen forces, I'm not sure, but it's an interesting coincidence.

What are your theories?