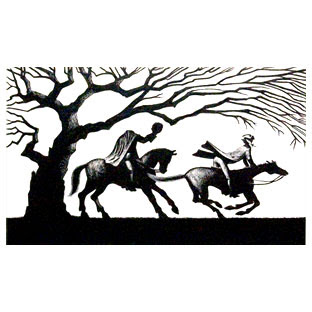 Sometimes, a short story is all that is necessary to begin a legend. "The Legend of Sleepy Hollow" was a short story by Washington Irving and it was such an American classic horror story that it has become synonymous with autumnal harvests, Halloween, scarecrows, Jack O'Lanterns, and American historical literature.

Taking place in a peaceful glen in New York in the late 1700s, the area was said to be haunted by the spirit of a Hessian trooper who lost his head in a battle during the Revolutionary War. The story evolves with a wealthy daughter whose father is hoping to marry her off. The two men that vie for her hand are Ichabod Crane, the bony, nervous schoolteacher and Brom Bones, the town bully. Bones plays some pranks on the twitchy schoolteacher to embarrass him in front of the young woman. When Ichabod rides home through the woods, he sees a headless rider on a horse with his head upon his lap. The schoolteacher tries to race away and all that is left of him is a wandering horse, a shattered pumpkin, and no Ichabod. The story leaves one to wonder if perhaps Brom Bones dressed up as the Hessian to scare the schoolteacher off and win the young woman's hand.

The concept of the headless horseman has been well embedded in imagery of Halloween and inventive costumes. The imagery of being in an autumn forest, chilled night, darkness, and a rearing horse with a headless occupant have created fright in children for centuries. In fact, it's inspired a few movie, as well -