Legends Week: The Killer In the Back Seat 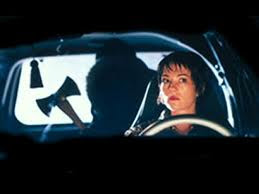 Terrified, she races down the roadway towards her street, pulls into her driveway and the car comes up behind her, lights shining into the back of her car. She runs from her car and the man in the other car yells at her, "Go inside! Call 9-1-1!" She does and when the cops arrive, the awful truth is revealed. The driver was trying to warn her that there was a killer in her back seat with a butcher knife, about to stab her when he scared him from acting it out.

There are a few variations of this theme including one with a gas station attendant who sees the killer while pumping gas, acts strangely and scares the driver. She thinks he's the killer, but he's trying to save her from the killer.


Totally just a made up tale, huh? Well, it's believed it might be based on a true story from the 1960s of a killer hiding in someone's back seat.  I personally thank the legend because it has made me very aware of looking into my back seat before I get into my car.