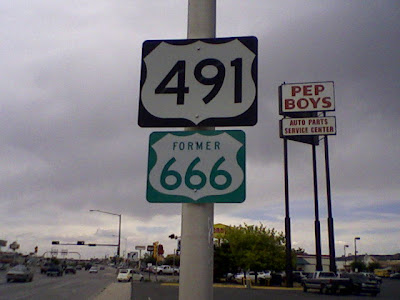 US 491, formerly US 666, passes through each of the 4-corner states; AZ, NM, CO, UT area.  Although the number came about by usual highway number methods, many were frightened by the "sign of the beast" number 666. Tales began to circulate about it being the Devil's Highway and a higher than usual amount of deaths occurring there. Statistically it was found to be a little behind most US highways. And, as something is always forbidden, people were stealing the signs right and left. Renumbering the highway was in order.

At the dedication of the new highway name, George Blue Horse, a Navajo medicine man, performed a ceremony to remove the curse from the highway. In the Navajo language he stated, "The road itself never ends. It goes on generation to generation. The new number is a good one. The new road will be a medicine."


From one of my favorite book series (you need to get the book for the US or for your state) - Weird US, comes this -

Linda Dunning, author of “Specters in Doorways: The History and Hauntings of Utah” tells of an experience her husband had on this treacherous road. He was driving alone on Route 666 one night when suddenly “he saw a truck that looked like it was on fire heading straight for him, right down the middle of the highway. The truck was going so fast that sparks were flying up off the wheels and flames were coming from the smokestack.” He estimated that the truck was traveling 130 miles an hour. He pulled off the road and fled into the desert until the imposing, flaming vehicle passed him by.

According to Linda the mad trucker is not the only apparition one should be wary of while traversing this cursed ribbon of asphalt. She says “Packs of demon dogs have been seen on this highway as well. They attack at night with yellow eyes and sharp teeth; shredding the tires of those silly enough to stop along this highway at night. Then there is a beautiful, young and frail girl in a long nightgown that roams the road. People see her walking along the side of the road, all alone in the dark out in the middle of nowhere. They stop to help her and as they approach, she instantly vanishes. There are many other tales of people who either disappear along this route or suddenly appear out of nowhere. There are even tales of the same person, disappearing at one point along the highway and then reappearing at another location miles away, without having any recollection of where they have been or what they have been doing.