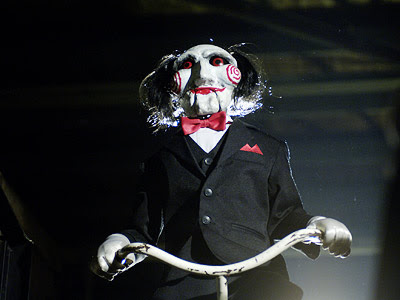 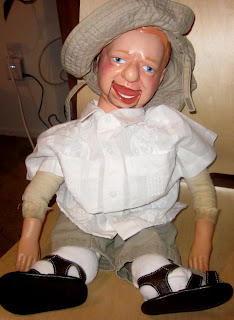 Now, I was looking through The Human's posts about movies. She looks at movies like a, well, human. I'm going to share horror movies from the doll's point of view. We like to see dolls get one-up on the humans.

My favorite might surprise you, "Poltergeist." In one of the most wicked moments in a horror movie, a clown doll drags a kid under the bed and scares the crap out of him!  I could watch that scene over and over again.

The movie "Saw" is a particularly good movie because humans get tortured, and the doll on the tricycle manages to steal the movie in only a few minutes' of air time. That's the impact of the doll, humans. Don't forget that.

You might be surprised to know, I regard "Psycho" as a doll movie and that's just cause mama has a creepy doll-like quality and she manages to control her son. She's better in death than life because she's joined the dolly world.

There's some great movies in which humans don't seem to know the dolls aren't human. "Magic" with Anthony Hopkins, "Pin," "Fear," and "Tourist Trap" are deliciously twisted. Are the dolls managed by the humans' minds or vice versa? I'll never tell.

There's even a few movies I enjoy that aren't about dolls, but about stupid humans. Stupid humans is an oxymoron, I know, but hey the dumber ones are graceful enough to bite the dust in the movies. Here's some human horror movies that would curl my toes, if my toes could curl.

Now, if you're wondering what movies scare the crap out of me, I'd have to tell you anything with a clown in it. I freaking hate clowns!  I think the miniseries "It" is the worst of them all. Hey, I may be tough, but even I have an Achilles. Just don't go sharing that info with anyone or I'll have to hunt you down and torment you like I do The Human -


And, speaking of The Human, she's doing a radio show tonight on East Texas Mysteries.