How To Do Seances 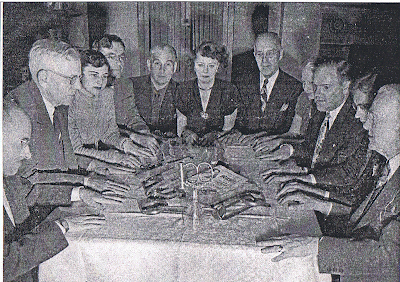 I have performed many seances over the years and what I can tell you is this; there is no perfect saying or ritual, but there are some basics that should be adhered to -

That being said, the elements of seances are similar, no matter how you word them or pace them.

MEDIUM:  You do not need a trained medium, but you should have someone who is psychically sensitive. I would prefer to not use a empathic psychic, but someone who is more in control of the emotions that might bombard him/her, so I'd choose a psychic who has either precognition abilities, physical abilities like PK or psychometry, or someone who is very good at reading people by any means, whether it's tarot or palm reading, tea leaves, or whatever.

GROUP: You will want a group. I have found a group should consist of 4 people but no more than 8. That seems to be ideal. Too few bodies and there is not enough energy. Too many bodies and it's intrusive and too much energy.

Whether they are male or female does not seem to show a difference, but I have found over decades of doing this that having men on one side, women on the other is helpful. My guess is that one side of the table will attract a spirit energy because of its very sex and having them united on one side of the table makes that energy and safe harbor more apparent.

Whether or not the group members are believers seems to do nothing to the results of the seance. Some folks like to blame a dud seance on the nonbelievers, but honestly dud seances are as common as dud ghost hunts. It's a rare thing to have a good hit on a seance, believers or not.

BEGIN:  In an ideal situation, I prefer to use rose scented candles or gardenia or lilac, some sort of heirloom flower scent. Some mediums do not use this because they want to be able to tell if a spirit arrives by its scent, but that is rare and I'd rather have the group in the right mindset. The olfactory sense is the most immediate one. Any time you ever were hit with the smell of Coppertone lotion and immediately felt nostalgic, you know how powerful it is. When it comes to being in the right place in one's head to attract spirit interaction, having the group collectively feeling open is more important than worrying about masking scents.  As well, if you have photos or items of the dead, place them on the table.  If you wish to record, put the recording devices on the table and around the room.

Now that you have placed women on one side of the table, men on the other, I suggest that all participants put their hands on the table, palms up. There is no need to touch each other. Each person will be their own beacon. I often during ghost hunts turn my palms upward to let my own energy (aura) outward like a beacon. If you put your hands down on the table, you are stifling the most powerful outlet of energy in your body, your hands. I know that traditionally, mediums have liked to use hand holding as a way to link the energies into a protective circle, but that is not necessarily productive. Like a chain, you are only as strong as your weakest link. Someone in the group invariably is thinking about tomorrow's supper plans or simply believing there is no way anything can happen. If each individual allows their own energy to emanate from their hands upwards, it is like a dozen fire lights flickering in a forest.  As well, the individuals' intent and emotional content, spirituality and latent psychic abilities will produce their own unique signature of outward energy that can attract.

So, palms up, seated comfortably. Candles lit, and I suggest participants look above and beyond the person across from them. This way, all parts of the room are being watched by someone who has over time gotten to know the usual look of that part of the room and can discern changes as well as have a glimpse at anything that might come to that person across the table from them.

CEREMONY:  Ceremonies begin and end always with a protection blessing. This can be done any manner of way, so long as the participants are comfortable with it. Some teams use Christian prayer, but a member who is not Christian may be uncomfortable with this. My advice to that person is that they participate in so much as forming silence and allowing the members to be comfortable with their own protection blessing and if that person wishes to, they can word a protection silently for himself.  The basic wording should include these aspects; we are gathered here in hopes of reaching those in the spirit world, as we seek answers to questions. The members here are of of the living plane. When this ceremony is occurring and when it is over, these physical beings are to be allowed protection from any harm or associations. Our intentions are pure and we expect the intentions of the spirit world to be, as well.

The medium can ask a question and I find that ideally, it's best if after she has asked the question, you wait about 20 seconds before the person to her/his right asks a question with the same wait time, and then the next person, around the table until the medium's turn. Now, that the medium is in charge again, it is time for her to request more information. She is free to reveal any names, images, or other things that come to her as she is "channeling." If there are great pauses and silence in her giving information, it is fine to have the person to her right begin a question again and do this around the table until the medium's turn again. If she has no more information to add, it is time to close the circle.

CLOSING:  Closing should begin with a thank you to the spirits and a dismissal, to the effect of, "we appreciate your visit and your communication. Thank you for your cooperation. We wish to release you back to your spiritual realm and these members to their physical realms, free to continue our experiences as before."

As I talked about in my book "Was That a Ghost?" about the "Trinity of Relevance," The same 3 elements are at play in how people react to seances. Context-if one knows he is entering a seance, there is expectation of the theatrical responses seen on TV. Just because he is in a seance, he might believe everything that happens is spirit-related. Belief-if he has a belief system that includes demons, possession, and an evil spirit world, his explanations of what's happening will be colored by this. Explanatory style-how that participant explains the situation to himself can create either peace or unrest.

WARNINGS:  Followup with the participants is important. Latent psychics can show very strong reactions, even signs of possession, if they don't realize how highly suggestible they are and how open they are to be a conduit. So, if signs of a "possession" do occur and a member suddenly starts being out of touch with what's happening, it is best to break the circle, have the medium come over to the person, place her hands upon the person's back and give a very gentle shove and say "disperse." This is usually enough to bring the person back to baseline. It is hard to tell whether such a thing as possession is possible, but we do know that in the fervor and belief of religious ceremony, people can speak in tongues and dance with snakes, so it is entirely possible that a suggestible person can get caught up in a feeling or an image and run with it until it's out of control. It's very comparable to a person acting as if they are going to die if they get into a airplane. The mind psyches up the body to react with threat.

For those who have strong religious beliefs that make seances an unacceptable form of communication with the dead, that is fine. I will also remind people that any time you do an EVP session and ask the spirits to knock on the wall or answer your questions, or any time you visit a family member's grave and talk to them, you are having a form of seance.