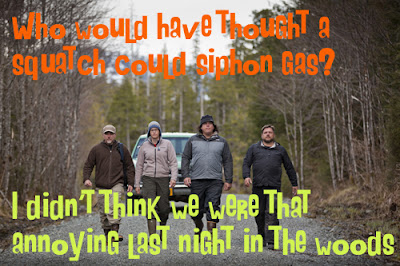 Last night, the Finding Bigfoot team went to Tennessee, right smack dab in some of the best squatch country in the US.  The Great Smoky Mountains of the Appalachian Chain have had a lot of reports of Bigfoot sightings. I just want to say, I wish they would quit referring to Bigfoot as an animal or an ape.

Ranae was bringing a logical and healthy skepticism to the photos that look very blobsquatchy. She talked about pareidolia which is the human desire to see meaningful things within shapes. The photos they examined were of a horrible quality, so nothing could be determined, but the area looked promising.  I run into this in ghost investigation field, as well. If you have to tell people what you heard on an EVP or what you see in a photo and they don't hear or see it without prompting, it's not good evidence.

Bobo: I got a really good feeling. When I get this feeling, I'm 75% right and I think we're gonna get some action.
Ranae: I don't know what to say because Matt is agreeing with me.
Bobo:  I don't know if it had big balls or it just wasn't too bright.
Bobo:  Only a moron or Ranae would say that was a bear.
Bobo: That's a big head, another thing I have in common with Squatch.


They came out at night and laid some Payday candy bars on a log and set up a camera. They did some hollering and got a tree pushed over.  Nothing touched their bait. Matt was so excited, he wanted to stay there for a few nights.

The town hall meeting provided some good witnesses. I always enjoy listening to their reports. They chose 3 stories that showed promise; a family that saw one cross the road, one who might have seen a juvenile BF, and another who saw a tall one look into his window and show its teeth.

Ranae thought the family saw a hoax perpetuated by someone, at midnight on a lonely roadway.... She found it hard to believe BF was that close to the amusement park, but BFs are known to get in very close to civilization. The family pointed out the massive butt and thigh muscles which are often reported by witnesses.

Bobo spoke to the man who might have seen the juvenile BF.  This man encountered one that seemed to be a child and it barked at him. It seemed to not be too scared and rather brave, in fact.

Then, they met with the man who saw one peering into his window.  Ranae did point out something I found odd, that the man turned on his light in the room and saw the face outside the window. I have never been able to see outside my window with the light on inside. Still, he reported the face up at a height that was well above his own.

Matt didn't encounter anything, so they are going into the woods with some hog callers to try and attract wild hogs that Bigfoot might be stalking.  They got a response; another tree fall ("tree down") I have heard of Bigfoot body slamming a tree before when angered or frustrated and they apparently report this commonality that they've found, as well.

It wasn't particularly fruitful, except for two tree falls. But, that region is obviously a dream place for a BF.

Next week, they go to Pennsylvania.