Men In Black: What's Their Purpose? 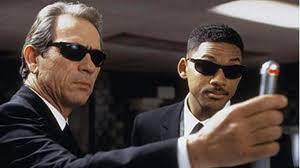 Men in black; those nondescript men who show up on people's doorsteps who have experienced potential alien encounters. They are an odd enigma that has unsettled many. They seem to be some kind of archivists of events or perhaps there to cover up the events. They have been known to look a bit out of time in their dress, a bit off in their mannerisms, wearing dark sunglasses, driving a big black car, with un-human-like emotions, and often with extraordinary skills.

GOVERNMENT
Many assume that these are government workers. Any of us who have lived in the DC area know what secret service looks like and these guys have a similar conspicuously-trying-not-to-look-conspicuous look.  This is probably the most logical answer to the MIB phenomena, but there are some things that don't jive. It's entirely possible to train covert government workers to act as unmemorable as possible and unable to pick out in a crowd, but MIBs have been reported showing up in other countries, such as England and China, to question residents.  Other witnesses have reported unusual skills like making things vanish or the interviewers vanishing before their witnesses' eyes.  The government has a lot of reason to want to gather information about UFO visits, but if they wanted to make it not unusual, they should just make it seem casual and relaxed so that the witnesses also figure they could care less about it, but are just following a technicality and show of effort. The MIBs do flash credentials usually, but also warn people not to report their witnessed event.  Other than to canvas the population about how ready they are to handle UFO action, it doesn't seem to make sense to send in people they trained to be conscious dorks to interview witnesses.


ALIENS
I guess the logical question about aliens posing as humans to question witnesses is, "why?" Do they wonder what we think of them? Do they hope to see if we're ready for their first contact? I'm not sure I understand exactly why anyone would assume this other than the reports of odd abilities that are superhuman.  Besides not making sense from a logical standpoint, it is a rather exceptional explanation for these encounters. It's understandable that the aliens might like to keep these witnessed events silent, they have not shown a tendency to send MIBs to talk to abductees. Why not? They had closer encounters with aliens than people who saw space ships.


What are we talking about here? Well, it would seem the government has more at risk here, but it also seems like a very odd way to interview people by showing men in fedoras and black suits and dark glasses flashing a badge. It screams COVERT. Aliens imitating humans? Perhaps, but it would be more likely they have some DNA of humans to make their own clones that they repeat over and over again, hence their twin-like attributes. Something could be loss in the training of them that is missing having been raised with humans. Both scenarios are rather extreme, so I would likely stick with the concept that interviewees under stress may be recalling the encounters with lack of details.

Do men in black still occur today? Yes, reports are still in of such reconnaissance happening, along with unmarked silent helicopters, trains, and cars.  The legend of the Men In Black has become such a part of American storytelling, that a hilarious series of movies, "Men In Black" was made utilizing all the elements and then some!