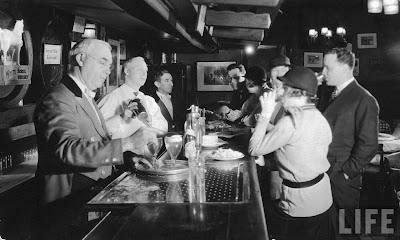 Prohibition:  From 1920 to 1933, America banned alcohol production and sales, but that didn't stop inventive folks from stilling liquor and serving it in hidden lesser known locations. They were named speakeasies because in public, people whispered of them and once inside, they remained quiet to not draw attention to the illegal gathering. Bootlegging liquor obviously brought in a gangster interest and mob activity associated with killings, greed, and intimidation.

Speakeasies, brothels and gambling went hand in hand and developed the gangster/mobster issues that ensued. When there is a hot industry to be made and no regulation, lawlessness occurs, as do killings.


It would appear that Decatur, Illinois has cornered the market on speakeasy ghosts. In the downtown area where buildings that once housed speakeasies are located, tenants are still troubled by the past shenanigans.


The first reported activity seems to have occurred in 1994 when an employee from the local utility company was making his monthly rounds reading the power meters. He was working in the upstairs of the building adjacent to where the gambling rooms were and noticed that odd sounds could be heard coming through the wall. He later reported to me that the sounds were of a number of people talking and laughing, the sound of music being played and something that sounded like a marble spinning on a roulette wheel. At that time, he had no idea that the rooms next to where he had been that day had once contained a gambling parlor nor that the rooms were abandoned at the time he claimed to hear the sounds.

In early summer 1996, the employees at Bell’s Jewelry store started to notice that all was not right on the upper floors of the building. Three employees of the store individually reported hearing sounds like heavy objects falling and footsteps on the third floor. When they went upstairs to investigate, they found nothing. At one point, they even called in an exterminator, thinking that a rodent problem might account for the odd noises. The pest control company was unable to find any openings where animals could get access to the rooms.

All along, store employees had reported feeling uncomfortable in the old gambling rooms when they had any occasion to go inside of them. In fact, they had largely avoided them before the noises had started. One of the employees recalled the weird feelings that she would get inside of the rooms. "The first time that I went up there, I felt afraid," she told me during one of many interviews I conducted with the staff. "I knew instantly that I didn’t like it up there.... a year later, curiosity got the best of me because I wanted to see the old magazine pictures that were supposed to be on the walls. I had my niece go up there with me and it seemed like the room was very cold... I got the feeling something was in that room. There were cold spots in there and it gave me a bone cold feeling. My hair actually raised on my neck."

The inexplicable noises continued over a span of several months and then other things started to happen, like items in the store downstairs going missing. Tools, cases and small pieces started to vanish without a trace. Some of these items would turn up again in other places, while most things, like a mostly full bottle of Jim Beam whiskey, were never seen again. They also reported that on one occasion, all of the jewelry cases in the store were somehow unlocked and opened during the night even though the elaborate alarm system was never triggered.