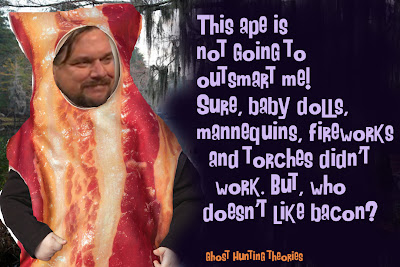 Last night, the team went to West Virginia (the home of most of my family). I have been going there since I was a baby and the towns I go to, have not changed one single iota in several decades. Much of the land is untouched and filled with caves, lakes, streams and tons of wild turkeys and deer. West Virginia is a state one doesn't drive through, it's a bit of a dead end for road trips, so people go there intentionally and not to go through it to go somewhere else. If there was ever a great state for BF, it's this one! In fact, I had an encounter I believe at the Pipestem State Park which is a sanctuary for wildlife. I hope to go back there this summer and check it out more closely.

Best Lines From the Show:
Cliff:  Surely, crappy photos are fully forgivable.
Bobo: He's a real squatcher, I'll tell you that. Welcome to the club.
Cliff:  Like the gates of hell opened up!
Ranae:  If there's one thing I know Bobo loves, it's a party.
Ranae:  Maybe I'll get a special visitor tonight in my tent.
Cliff:  Just shows what a squatchy place West Virginia is.
Cliff: It was like walking into Bobo's hotel room or something, it was just off the hook!

The team took the young man into the woods who had sent them the blobsquatch pic from his backyard. The deer grazing along the back of his property line was exactly like everywhere else I've  been in WV, including lots of wild turkeys rushing around in groups. The state is the Garden of Eden for Bigfoot with crops, oak trees attracting wildlife, caves, waterways, and tons of privacy.  They had a branch fall in front of them and they didn't find a place where it came from. The team got a howl in response to a howl.  Ranae wanted to stay when it rained and the rest left. The branch made her want to know more, as the aera seemed to be ideal for squatch. Ranae found a cave that looked like a good hideout.  They had some Bigfoot hairs that a couple found where he went over a fence. They sent it in to be checked out and showed physical characteristics of BF hair.

They talked to an ex sheriff and marine who saw BF.  This ex-lawman is trained to observe and take note of things and don't want to have their names associated with something absurd.  Ranae pulled out balloons and glow sticks and noisemakers. She did some wood knocking on her camp out too. The others went to check out another witness from a daytime sighting. They found out it was a very legitimate hunter's account and he might have been inadvertently feeding them entrails and organs every time he gutted a deer and left the innards there. They went to a ho-down and listened to local music.  Ranae had no squatch luck even though the location seemed ideal.

The team decided to go to the location the witness gutted deer at and gathered up some slaughterhouse guts to use as bait. Bobo made some calls and got an owl response. They all heard calls that were terrifying. Something took the guts and the camera was on it. Bobo thought the trip was epic and the best trip with the group yet.

Interestingly, the camera malfunctioned and didn't get shots and the hair didn't yield DNA for evaluation. Hmm.... I sincerely hope they go back. Julie and I will report daily when we are there, sharing our own experience when we go there.