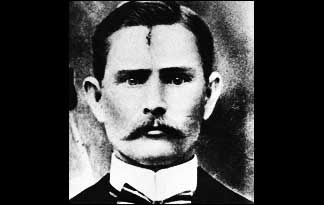 Outlaws and the Old West - you can't get much more American Legend than that. You also can't find a catalyst for more badass ghosts.

Investigating the Bird Cage Theater in Tombstone a couple years ago, I learned a lot about the amount of deaths associated with a place that was known for drinking, gambling and whoring by some folks who almost no scruples. Put that atop of copper mines running through the land beneath, and you have an almost too tempting conduit for a haunting.


Jesse James was seen as a Robin Hood of the West.  His body was buried at the family's Missouri farm and later moved to a cemetery, but folks at the farm reported his haunting there still with reports of doors slamming, lights moving, a feeling of being watched, and sounds of yelling and gun shots.

The 1930s outlaws, Bonnie and Clyde supposedly give off ghostly image at the location where they died when people take photographs of the marker.

Thomas Edward Ketchum was born on October 31, 1863. He was the first person to be hanged on April 26, 1901 in New Mexico and the only one for train robbery under a law that was later found to be unconstitutional. He haunts his favorite hangouts.

A man who wants to remain anonymous saw Ketchum’s ghost when he was a boy. He and several friends were backpacking through the mountains and decided to camp under an overhang over one of the outlaw’s favorite hang outs. They built a fire and talked about their trip before going to bed. The boy drifted into sleep, thinking about Black Jack. He was awakened by a noise in the bushes. He felt paralyzed and couldn’t yell. He saw a black clad cowboy, holding a gun, run out of the bushes toward Ketchum’s hideout. The figure was solid, with some translucent parts. The cowboy was unaware of the boy. The boy heard men yelling and gunfire. The cowboy fired his gun six times into the trees, ran, stood over him and discharged six shell casings that fell onto his sleeping bag. Suddenly the wraith saw the boy and said, "You're not supposed to be here," before he vanished.

As the boy rolled up his sleeping bag in the morning, he found six shell casings. The boy told his friends about his experience. They were amused by the story and shrugged it off as a prank. The boy never mentioned the incident again, but kept the casings. Later, he saw a photo of Black Jack. He was the specter he saw. He contacted a gun expert who said the casings were dated from sometime around 1878, but were in almost mint condition.


Given their tenacity and single-mindedness and the angry ways in which they died, if anyone can haunt a site, an outlaw should make it happen.