Articles About My Childhood Home 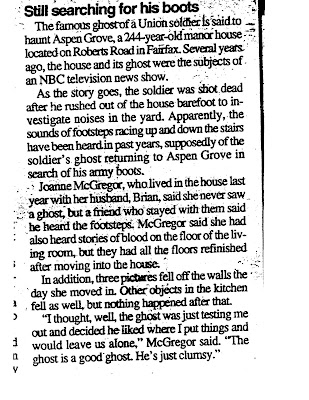 I was just glancing through my stored stuff and found this little snippet from an article about Aspen Grove (above). I have one article I want to put up here, but for some reason the copy ended up with a black background and it's hard to read, so I'm going to transcribe it here for ya'all. Do take note what my mother says at the end of the interview...

Ghosts—are they born to fantastic imaginations or can the spirits of the dead actually haunt and terrorize the living. Ask this question to people familiar with the historic 237-year-old Aspen Grove house, 2400 Roberts Road in Fairfax County and many, if not most, will say the ghosts are more than creative thought.

“I am very skeptical about things like ghosts, but there were occurrences at Aspen Grove that were just too incredible to be coincidental, said Anna Sue Day, a long-time owner and resident of the house in the 1960s and 1970s.

Day first suspected the ghost’s presence in 1964 only three days after moving into Aspen Grove. “On one of my first nights at Aspen Grove, I was in bed when I heard footsteps on the staircase.” Day said. “It was frightening because my husband was away on a trip. The footsteps would disappear every time I checked. This happened night after night.”

Although Day never told her husband about her experiences, soon he heard the same footsteps and asked her about them.

After some research, Day learned that the house was supposedly haunted by the ghost of a Union soldier killed while occupying Aspen Grove.

Legend has it that the Union Soldier rushed outside with bare feet after hearing some noises in the yard and was shot to death by the enemy and still returns to Aspen Grove, racing noisily up and down the main staircase in search of his army boots.

Aspen Grove changed hands several times between the Union and Confederate armies during the Civil war. The house served both armies as a shelter and a hospital. Initials and blood stains of the soldiers can still be seen on Aspen Grove’s pine floors in the dining room and living room. The enduring Aspen Grove has sheltered a lot of emotion, anxiety and pain.

Also, during the move, Day said a portion of the ceiling between the kitchen and dining room fell with no rational cause. “It just fell from nowhere,” Day concluded that the ghost did not want her to leave.

“Actually, I loved the house and felt very secure in it.” She said. “I never really feared the ghosts, in fact, my husband and I always promised to each other that we would haunt the house some day.” 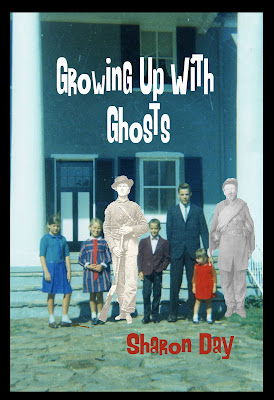 Learn more about my upbringing in a haunted house -