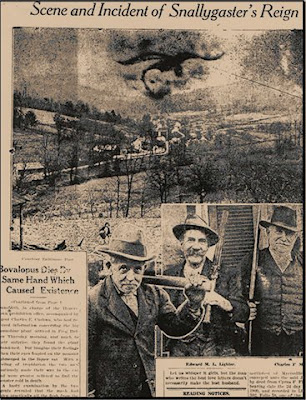 You don't think of odd things when you think of Maryland but they are known for a few odd "creatures" like the Goat Man and the Snallygaster.

What is a snallygaster?

Reported in a 1909 newspaper article, a man supposedly was picked up by a winged creature that sucked his blood and dropped him off a cliff.  This area when it was settled was riddled with tales of all kinds of monsters and weird creatures. This Snallygaster was described as, "...sporting a razor-like beak, lethal claws and a single eye in the middle of its forehead, the creature also, for added effect, emitted a screech like “a locomotive whistle.”

Lots of legends of the monster's antics grew with the telling including a giant egg being laid and a railroad man being carried away.  What interests me the most is the winged-appearance/blood-drinking aspects that sound a bit like reports of the Jersey Devil, interestingly reported in the neighboring state of New Jersey.

Over the decades, the stories died down but it left some residue - now they have a beer festival named after it - that's when you know you're a legend!