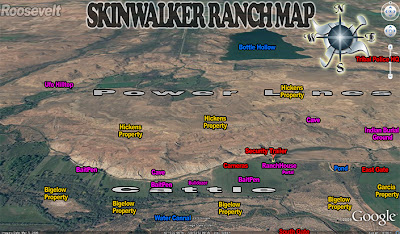 Referred to as "Skinwalker Ranch," this location in Northeast Utah became infamous for a wide variety of unusual "portal-like" phenomena. One of my favorite nonfiction paranormal books, "Hunt For the Skinwalker" was based on this location and the supposed studies that went on for years there to determine what was occurring at this ranch.

A family living at the ranch reported everything from shapeshifting creatures, werewolf-type beings, Bigfoot, poltergeist activity, UFOs, strange lights, portals with Bigfoot climbing out of them, and more.  As farfetched as some of these claims may sound, there is something that hits a note for anyone who has come across such phenomena. There are also some regions of the country where these "portals" seem to pop up and disappear over time.

Here's an eerie passage from a section of the book where "researchers" were studying the property.

"As Mike brought the binoculars to his eyes, Jim heard the sharp sucking in of breath. Jim could see that the light was now more than a food wide and was still growing larger. This very obviously was not a reflection. The dirty yellow expanding light seemed to be positioned just above the ground, rather than directly on the ground, but Jim could not be sure. "It's a tunnel, not just a light." Mike whispered. Jim ignored his partner's growing agitation as he increased the length of the time exposures to forty, then fifty seconds. Mike was now standing up. "Jesus Christ." Mike said hoarsely, "Something's in the tunnel!"

Jim looked carefully at the light below. It had now expanded to more than two feet. Something that big should definitely register on his film. "Oh my God," Mike said suddenly thoroughly frightened. "There is a black creature climbing out. I see his head." Jim felt alarm. His companion was plainly bordering on panic.

"It has no face," whispered Mike. "Oh my God. It just climbed out."


This site had such a wide variety of weirdness that it will go down in history as a term almost interchangeable with strange happenings. Did it really happen? Unless you were there, you cannot know for sure, but you have the option of listening to the evidence and believing. Belief and knowledge--two different things.

My take on this is one of curiosity. There seem to be other such weird portals of activity cropping up all over the country and then dying out over time. So, what are we dealing with? Does the Earth itself provide some either hallucinogenic effects with the right geology, do small stories told become huge legends in rural settings or is there something manipulative and with unclear intentions.

I hope y'all go and research some of these locations of weirdness, especially the Skinwalker Ranch. The book (link above) is one of my very fav's in this genre.